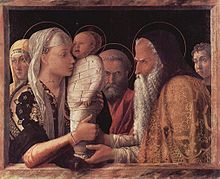 Presentation of Christ in the temple , Gemäldegalerie Berlin

Andrea Mantegna (* 1431 on Isola Mantegna, formerly Isola di Carturo , near Piazzola sul Brenta , Province of Padua , † September 13, 1506 in Mantua ) was an Italian painter and engraver . His painting is influenced by the examination of works of sculpture , in particular by the Tuscan sculptor Donatello .

In addition to his brother-in-law Giovanni Bellini , he was the most important painter of the Northern Italian early Renaissance as a student of Francesco Squarcione . He was the son of a carpenter, came from a simple, rural background, but was interested in ancient sculptures from an early age. He had to work as a cattle herder in his early youth, but at the age of ten he was orphaned because of his drawing talent in the painting school of Francesco Squarcione in Padua , where he learned for seven years, among other things, how to draw ancient statues. His first work was a large altarpiece in the church of St. Sophia in Padua . After a rift caused by jealousy and hatred, Mantegna separated from his teacher in 1447.

In 1449 he was recorded at the court of Ferrara , where he got to know the works of Rogier van der Weyden and Piero della Francesca . In 1452 he returned to Padua to finish his work on the lunette in the Basilica of Saint Anthony in Padua . Then he went into the service of Marchese Luigi III. Gonzaga to Mantua, where he opened his own painting school. Here he painted his Great Triumph of Julius Caesar in nine boxes. These came into the possession of King Charles I of England in 1629. Since then they have been at Hampton Court Palace . From 1506 they were housed in the San Sebastiano Palace in Mantua.

More important for his later career was the collaboration with Niccolò Pizzolo (around 1420-1453), an assistant to Donatello on the frescoes of the Eremitani church in Padua (1448-1457). In 1453 Mantegna married Nicolosia Bellini, the sister of Giovanni Bellini . 1456 Mantegna was by Margrave Luigi III. Gonzaga was appointed court painter to Mantua, in whose service he remained, regardless of his activities in Florence , Pisa and Rome in 1488/89. Mantegna's work played a major role in the rather insignificant city of Mantua becoming a center of the visual arts. Mantegna was called to Rome by Pope Innocent VIII to paint in the Belvedere . In Rome "a lot of excellent pictures were taken, but these are extremely rare today".

Mantegna had three sons who also became painters, among other things they designed the chapel in which her father was buried.

Correggio and Raibolini are the most famous among Mantegna's students .

Mantegna is considered to be the real finisher of the ideal of art established by the Florentine School : the figures are monumental, strict, full of seriousness and dignity; the objects and the boundaries of the space are shown in sharp drawings and with consciously applied perspective means (often exaggerated). The colors are often harshly juxtaposed, the physical in its plastic is strongly worked out, with the anatomy of the naked body being explained in detail. The connection to antiquity is particularly evident in the statuesque serenity of the figures, and depictions of ancient parts of the picture or architecture can also be found in his works.

In addition to the frescoes in the Eremitani Church in Padua , with depictions of the life of St. James and the Assumption of Mary, accompanied by putti , one of his main works is the high altar of San Zeno in Verona (1456-1459), where for the first time in northern Italy Art of the image type of the Sacra Conversazione was depicted. His main work from his time in Mantua is the painting of the Camera degli Sposi in the ducal palace of Mantua (Castello di San Giorgio, 1465–1474): This is the first illusionistic room decoration with a ceiling painting that simulates a view into a free space. Mantegna also created the first group portrait here.

The copperplate engravings by Mantegna were also excellent: with “excellent drawings” they achieved good sales.