Antonio da Correggio (actually Antonio Allegri, short Correggio or il Correggio ) (born August 1489 in Correggio , †  5. March 1534 ) was an Italian painter of the Renaissance . He worked mostly in Parma and Correggio .

The birthplace of Correggio, after which he is named, is in Reggio nell'Emilia . His father was a businessman. From 1503 to 1505 Correggio was apprenticed to Francesco Bianchi Ferrara in Modena . In his earliest works, influences of classicism by artists such as Lorenzo Costa and Francesco Francia can be proven, which probably go back to this time. In 1506 Correggio was in Mantua , then he returned to Correggio, where he stayed until 1510. The adoration of the child with Elisabeth and Johannes , which seems to show influences from Costa and Mantegna, is assigned to this period of his work . In 1514 he probably completed three tondi for the entrance to St. Andrea in Mantua. After returning to his hometown, he signed, now independent and increasingly famous, a contract for an altarpiece with the Madonna in the monastery of St. Francis (1514, now in the Dresden Picture Gallery ). 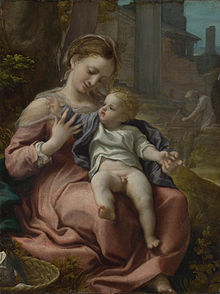 In 1516 Correggio stayed in Parma, where he remained by and large from then on. Here he made friends with the mannerist Michelangelo Anselmi . In 1519 he married Girolama Francesca di Braghetis from Correggio. From this period are Madonna and Child and the young John the Baptist , Christ's Farewell to Mary and the lost Madonna of Albinea . The painting Noli me tangere (approx. 1518, according to others approx. 1522–1525), already praised by Giorgio Vasari , comes from the phase of his mature years , today in the Museo del Prado in Madrid, which finally belonged to Emperor Charles V in the Hands of King Philip IV of Spain and found its place in the sacristy of the Escorial in 1636 .

Pablo Picasso quotes Correggio's masterpiece, which he must have got to know while studying at the Llotja in Madrid, in one of the most famous works from his blue period , the painting La Vie (1903), now in the Cleveland Museum of Art , Ohio.

Correggio's first major commission was to decorate the ceiling in the private dining room of the Abbess of St. Paul in Parma (the Camera di San Paolo). Next he painted the vision of St. John in Patmos for the dome of San Giovanni Evangelista in Parma. Three years later he adorned the dome of the Parma Cathedral with a surprising shot of Mary in the sky from Melozzo's perspective (seen from below). The two works pointed to a revolutionary, illusionistic dome decoration and strongly influenced the later fresco painting ( Cignani , Ferrari , Pordenone , Lanfranco , Baciccio ), especially through the massing of the audience in a vortex, the apparent disappearance of the dome and the thrusting view up into divine infinity as encountered again in baroque painting .

The starting point of Correggio's art is controversial. In addition to Costa and Mantegna, it could have been shaped by Leonardo da Vinci , as well as by Michelangelo and Raphael , in essential impressions of light and dark ( Chiaroscuro ) . Around 1518 he found his own style, which combines devotional expressions with almost baroque-looking, lively movements. This explains his great impact on baroque masters like Reni , the Carracci and Barocci .

Correggio's panel paintings develop diagonal compositions, richly depict the painterly chiaroscuro and are valuable in terms of color. His frescoes are particularly characterized by the boldness of the perspective view from below, the mobility of the figures in air and light and the suggestive power of illusion.

Significant of the more than 42 extant paintings by Correggio are u. a. the

Wikisource: Antonio da Correggio in the catalog of the Royal Picture Gallery in Dresden (1887)  - sources and full texts