The title of this article is ambiguous. Further meanings are listed under Pordenone (disambiguation) .

Pordenone (derived from latin Portus Naonis ; Venetic and comune Pordenon locally Slovenian Pordenún , German Pordenone ) is a town in the region Friuli . It has 51,714 inhabitants (as of December 31, 2019). Until 2017 it was the capital of a province of the same name , which was then dissolved.

The area was already inhabited before the year 1000. Pordenone has a picturesque historic old town along Corso Vittorio Emanuele II. The city is also an important industrial center in the region. The focus is on the production of household appliances. The most important employers are Zanussi (from the Electrolux group) and the many suppliers for the production of white goods .

Pordenone lies on a plain in western Friuli on the Noncello river . The proximity of Pordenone to the mountains is impressively demonstrated by the panorama of Mount Cavallo . After Aviano , located at the foot of the Dolomites, is 15 km away. It's not far to the sea either. To Caorle , which is on the Adriatic Sea , it is approx. 62 km. Venice is about 80 km southwest of Pordenone.

The excavations of a necropolis below the Palazzo Ricchieri have shown that the area around Pordenone was already inhabited before the year 1000. From the 12th century, the river port on Noncello developed into a lively trading center. This river port gives the town the name Portus Naonis , which over the years became Pordenone. The Noncello flows into the Meduna , which in turn flows into the Livenza River , which flows into the Adriatic Sea near Caorle . Thus there was a navigable trade route to the rich city of Venice. Pordenone was under Habsburg administration from 1278 . The Habsburgs granted the enclave many privileges. The surrounding region was ruled from Aquileia or Venice . In 1508 Pordenone fell under the control of Venice . At the beginning of the 19th century, trading via the river port was stopped. At the same time, the craft developed in the region around Pordenone. The textile industry ( cotton spinning ) was dominant until the Second World War . After the war, the artisanal character of the region around Pordenone changed and the largest industrial center for the production of household appliances in southern Europe emerged.

Le Giornate del Cinema Muto , the most important silent film festival in the world, has been taking place in Pordenone since 1981 . In 1999 the demonstrations had to be relocated to the neighboring village of Sacile for a few years for technical reasons . In 2007 the festival returned to Pordenone.

The literature festival "pordenonelegge" has been taking place in Pordenone since 2000, with authors from all over the world taking part.

Pordenone is on Strada Statale 13 Pontebbana and on the Venice – Udine railway line . To the north of the city is the La Comina airfield, one of the oldest civil airfields in Italy, which is now used exclusively for general aviation . Due to the nearby Aviano Air Base , flight operations in La Comina may be restricted.

The historic old town (also called antica Contrada Maggiore) is located along Corso Vittorio Emanuele II. It has retained its charm over the years. Gothic palazzi as well as city palaces from the Renaissance , arcades and street cafes line its course. 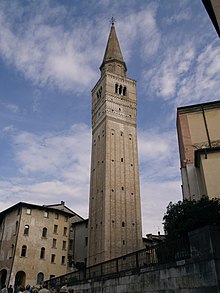 Campanile (bell tower) of the cathedral

Not only the architecture, but also the works of art inside the sacred building are noteworthy. The altarpiece of the Merciful Madonna, as well as the “San Rocco” frescoes, are by Giovanni Antonio de 'Sacchis . The artist is also called "Il Pordenone". But works by Giovanni Maria Calderari , a pupil of “Pordenone”, are also included in the cathedral.

The single standing bell tower ( campanile ) was initially built up to the belfry. This was completed in 1347. The octagonal gable dates from the 16th century. The bell tower is 79 meters high and is one of the most beautiful in Italy.

The Palazzo Ricchieri is located on Corso Vittorio Emanuele II and is one of the most beautiful domiciles of the nobility in Pordenone. In the Palazzo is the Museo Civico d'Arte (the city art museum). Not only the exhibits in the museum are remarkable, the city palace itself deserves the viewer's attention. The history of the palace goes back to the 13th century. Originally it was a defense system in front of the city gate. The Ricchieri turned the building into a Venetian-style palace in the 15th century. The aim of the renovation was to create a residence worthy of a count of the Holy Roman Empire . Further renovations were carried out in the 16th century. Among other things, the facade and the windows were changed.

The town hall ( Palazzo Comunale ) is located at the southern end of Corso Vittorio Emanuele II. It was built between 1291 and 1395 in the Gothic style. The arcades as well as the three-part three-pass windows date from this time. In the 16th century, the Palazzo Comunale was extended by the loggia with the clock tower and the pinnacles. The design for this extension comes from the painter Pomponio Amalteo , who was a pupil of "Pordenone".

The 17th century Palazzo Gregoris is located on Corso Vittorio Emanuele II. Domenico Rossi and Giuseppe Sardi built the palace in the Venetian style. The facade impresses with the arched windows and picturesque effects.

The 13th century palace of the captains is located on Corso Vittorio Emanuele II. Its facade is painted with frescoes .

In the palace there is a branch of the Pordenone Chamber of Commerce. The 18th century city palace on Corso Vittorio Emanuele II has recently been restored. The hall is particularly beautiful with an impressive mosaic floor and a stucco ceiling by Francesco Antonio Re .

The Church of the Holy Trinity is a bit outside the old town on the other side of the Noncello River, about 300 m from the San Marco Cathedral. The massive octagonal brick building dates from the 16th century. The church contains, among other things, beautiful frescoes by Giovanni Maria Calderari, who was a pupil of "Pordenone".

In the 13th century, a fort was built around a massive tower with a side length of 9 m and a wall thickness of approx. 2.5 m. At the beginning of the following century, the tower was raised and given battlements. From the 15th century, the fort gradually lost its military character and it was expanded into a stately home. In the following time only decorative alterations were made, which is impressively demonstrated by the fresco Maria Annunciation. The Archaeological Museum of Pordenone is housed in the Castello di Torre.

Not far from the Castello di Torre there is evidence of Roman times - the remains of a villa of a rich Roman. Frescoes from this villa and other exhibits from the Roman period are in the Archaeological Museum of Pordenone.

Communes in the Autonomous Region of Friuli Venezia Giulia