This article covers the home appliance manufacturer. For the music label, see Elektrolux .

Electrolux AB is a Swedish group in the field of kitchen appliances for household and commercial use, based in Stockholm . He belongs to the Wallenberg Group . In 2011 the company had sales of around 102 billion Swedish kronor and employed around 53,000 people.

In addition to Electrolux, the Group's brands and subsidiaries in German-speaking countries are AEG and Zanussi . The Swiss branch, in turn, emerged from the earlier Therma . 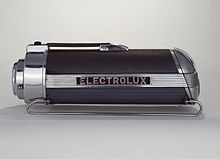 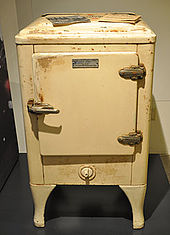 Electrolux was founded in 1910 under the name Elektromekaniska AB by Axel Leonard Wenner-Gren and was renamed Elektrolux in 1919 after the merger with the company Lux AB. In 1913 the company produced its first vacuum cleaner and in 1925 the first refrigerator , which worked according to an idea by Baltzar von Platen and Carl Munters . In the following years the company grew strongly. In 1957 the name was changed from Elektrolux to Electrolux. The Electrolux company logo was designed in 1961 by the Swiss artist Carlo Vivarelli .

In the 1960s, like many other household appliance manufacturers, the company fell into a crisis. The new management found that the company was too small to cope with the increasingly fierce competition, and a phase of diversification and aggressive growth was initiated. Between 1970 and 1979, 59 companies were acquired, and by the end of that decade Electrolux had manufacturing facilities in 20 countries and more than 80,000 employees.

In the 1980s this strategy continued, e.g. B. 1981 through the acquisition of the German company Progress or 1984 of the Italian company Zanussi. At the same time they tried to conquer the North American market, which had been given up in the late 1960s. In 1986 the kitchen appliance manufacturer White Consolidated Industries was taken over . In the 1990s, people began to focus on the actual core area again. In 1994 parts of the German group AEG were taken over, later the brand name was also acquired. In 1998 Electrolux sold the Swedish plow manufacturer Överum to Kongskilde Industries . In 2000 Electrolux sold its shares in Lux (Deutschland) GmbH to Lux International AG .

Today Electrolux is the market leader in household appliances. In 2003 the then CEO Hans Stråberg announced that he wanted to reduce the model range. In Europe alone, the company owned over 30 brands that are to be reduced significantly for marketing and cost reasons. With the liquidation of Quelle GmbH in October 2009, an important major customer for the group broke away. Quelle sold the group's devices under its private label Privileg . In February 2012, the company announced far-reaching restructuring measures, which included the shedding of more than 1,000 employees and the closure of several regional and country offices.

On September 8, 2014, Electrolux announced the takeover of the household electronics division of the American conglomerate General Electric . The purchase price should be 23.4 billion Swedish kronor, the equivalent of 2.55 billion euros. In December 2015, General Electric announced that the household electronics division would not be sold to Electrolux after all. Instead, the Chinese Haier Electronics Group took over the division for $ 5.4 billion.

The name Therma is mainly known in Switzerland. The Therma Group has been part of the Electrolux Group since 1978 . When it was founded in 1871, the Sursee oven factory included cheese cellar ovens, dehydrators, feed steamers, ovens, cooking stoves, washing stoves, coal-fired large kitchen stoves, gas stoves, church heating, central and floor heating. In 1923, the range was expanded to include electrical household and large kitchen appliances. In 1966 the three companies Therma AG , Elcalor AG and Surseewerke AG merged to form Therma Grossküchen AG . From January 2005, the company and the Therma brand were completely transferred to Electrolux.

As early as 1922 there was a sales office of Lux GmbH in Berlin. Shortly after the establishment of the German Elektrolux GmbH , the first Elektrolux factory outside Sweden was opened in Berlin-Tempelhof in 1926 . The product range included vacuum cleaners, refrigerators, electric floor polishers and small washing machines. In 1936 around 700 people were employed in the company.

After the Second World War, the dismantling and the Berlin blockade in 1948/49 led to the relocation of vacuum cleaner production to Wilhelmshaven . In 1957 this production line came back to Berlin-Tempelhof, where in 1981 more than 400 employees were still building vacuum cleaners. Production at this location ended in 1988.

Products for the private customer sector are now sold from Nuremberg , large kitchen appliances from Herborn and laundry machines from Tübingen . There are also research facilities at the locations.

In addition to its own activities, various competitors were also taken over in Germany, including in 1981 the bankrupt company Zanker in Tübingen and large parts of the ailing AEG group. The purchased plants suffered from enormous cost pressure, especially in the highly competitive home appliance market. The result was the closure of the AEG plants in Herborn and Kassel in 2002 and, from 2005, the closure of the washing machine and dishwasher plant in Nuremberg with 1,750 employees until 2007. These capacities were taken from the plants in Italy ( Porcia and Solaro ) and Poland ( Oława and Żarów ). As a result, from March 2007 there was only one AEG home appliance factory in Germany, namely the one in Rothenburg ob der Tauber , which produces ovens, stoves and hobs. Local union representatives called for a boycott of all the company's products ( consumer boycott ). The background to the plant closure is the continuing decline in prices for household appliances, mostly with appliances from Turkey and China. In October 2009 the group still employed around 2,000 people in Germany, 1,300 of them at the Rothenburg ob der Tauber plant.

In Germany and Austria, the Electrolux brand was discontinued on June 30, 2013. Since then, household appliances have been sold exclusively under the AEG brand. The Electrolux lettering and logo that were used at times disappeared from the AEG lettering. The name Electrolux was retained for commercial applications.

Electrolux doesn't just manufacture under its own name. Numerous companies went into the group. The operating facilities are assigned to the group, but the brands continue to exist, including AEG , Juno , Progress , Zanker and Zanussi and in the USA Frigidaire , Gibson and Kelvinator . Some of the high-priced devices at Ikea also come from Electrolux.

On January 1, 2001, the Stiebel-Eltron Group took over Electrolux Haustechnik GmbH with products and global responsibility for the development and marketing of AEG Haustechnik devices such as hot water storage tanks, instantaneous water heaters and underfloor heating.

The commercial kitchen division Electrolux Professional is an important supplier of commercial kitchen appliances and the market leader in the premium segment worldwide. The products distinguish themselves from the devices from Zanussi , which are produced in Italy and cover the lower price segment in the group.

The Electrolux Professional portfolio includes many traditional companies: for example the company Burger (and later Juno), which invented the hot air oven and combi-steamer, and the Swiss company Therma.

Electrolux was practically the sole European supplier of small absorption refrigerators for mobile homes, caravans and hotel rooms. The identical products were also sold under the Dometic name . In 2001 Electrolux sold the brand and stopped producing absorber equipment.