Udine [ ˈuːdine ] Listen ? / i ; ( Furlan Udin ; Slovenian Videm ) is a city in the Friuli-Venezia Giulia region in north-eastern Italy .

With 99,341 inhabitants (as of December 31, 2016) Udine is the second largest city in the region after Trieste and is the most important city in the historical Friuli landscape . The registry office confirmed a population of over 100,000 at the beginning of 2013 for the first time in 25 years.

Until 2018 Udine was the capital of the Province of Udine , which was then dissolved.

Udine's climate is predominantly continental, but less pronounced than in the cities of the central and western Po Valley . Temperatures are quite high in summer and relatively harsh in winter. In winter there is least rain, whereas in summer there are frequent thunderstorms , which can also be accompanied by heavy hail . Udine is considered the rainiest (ex) provincial capital of Italy. Sudden temperature changes can occur in Udine both in summer and especially in winter. Mild and humid air from the Adriatic can quickly be replaced by dry and cold air masses of continental origin. With around 10 cm of snowfall annually, Udine is one of the cities in northern Italy with the least snow. Most of the snow in the last few decades fell at the following times: 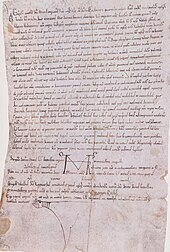 The place of today's Udine was probably the place of Utina in Roman times . The city was first mentioned in 983 in a document chartered by Emperor Otto II , who at that time gave Udine to the Patriarch of Aquileia , who moved his residence there in 1238. In those times cities were fortified with city walls; in the case of Udine, they have been expanded five times over the centuries to give more space to the growing population. The tower of Porta Aquileia belongs to the fifth and last wall, which encircled the city in an almost circular manner. The first market opened in Via Mercatovecchio, which was granted to the medieval town in 1223 by the patriarch Berthold von Andechs . “The market freedom together with the tax exemption (granted in 1248) attracted many free people who were so burgenses , i. H. Become citizens of Udine, built new houses, enlarged the walled patch and made it a city ”. It was not until the 14th century that the place gained importance at the instigation of the Patriarch of Aquileia, Bertrand de Saint-Geniès . In 1420 Friuli fell under the rule of Venice. In the unlucky year of 1511 civil war-like conditions spread, a severe earthquake destroyed the city and finally the plague broke out. In 1752 Udine became the seat of an archbishop

After the fall of the Republic of Venice , the balance of power in Northern Italy was reorganized in the Peace of Campo Formio (October 17, 1797). Udine then came under the rule of the Habsburgs . It was incorporated into the Napoleonic Kingdom of Italy in 1805 and became the capital of the Passariano department. On October 25, 1813, Austrian troops occupied the city and it remained under Austrian rule from then on, as it became part of the Kingdom of Lombardo-Veneto after the Congress of Vienna . In 1848, Udine was the first city to fall away from Austria after the uprising in Venice, and on March 23rd, the Austrian occupation was forced to withdraw. However, she had to submit again on April 23, 1848 after several hours of bombardment, whereupon Austrian troops under Count Nugent moved into Udine. During this time it was also called German Weiden in Friuli . In 1866, in the Peace of Prague, Udine as well as all of Friuli and Veneto fell to the newly founded Kingdom of Italy . During the First World War , Udine was the seat of the Italian high command from 1915 to 1917, until the defeat in the Battle of Karfreit . During the Second World War , Udine was under German occupation between 1943 and 1945.

In the 17th and 18th centuries, local noble families vied with the rich patriarchs in a costly competition for the most magnificent palaces. Thus came Giovanni Battista Tiepolo (1696-1770) from Venice to Udine to embellish palaces.

The University of Udine , founded in 1978, plays an important role for the city, and its almost 16,000 students shape the city's young impression.

The football club Udinese Calcio , founded in 1896, is one of the oldest clubs in Italy. His bigger successes include second place in the 1954/55 season, third place in 1997/98 and a historic participation in the Champions League in 2005/06.

In basketball, Pallalcesto Amatori Udine , better known as Snaidero Udine , was represented in Serie A until 2009. Rugby Udine also has professional players, who have been playing in Serie A for several years since the beginning (in reality it is an A2 series, as there is a higher class called Super10).

On June 3, 1990, Udine was the arrival point of the 13th stage of the Giro d'Italia with a victory for Mario Cipollini .

In the same year, three games of the 1990 World Cup in Group E took place in the Udiner Stadium .

Communes in the Autonomous Region of Friuli Venezia Giulia