The trophy (“trofeo senza fine”) of the Giro d'Italia

The Giro d'Italia [ ˈdʒiːro diˈtaːlja ] ( Italian for Tour of Italy ) is the second most important stage race in road cycling - after the Tour de France and before the Vuelta a España . It has been held for men since 1909 and for women since 1988 (as the Giro d'Italia Femminile ).

Luigi Ganna , overall winner of the first Giro d'Italia in 1909 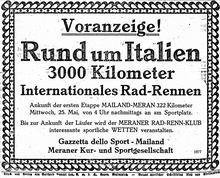 Advance notice of the Giro d'Italia in the Bozner Nachrichten of May 14, 1921

The editor of the Gazzetta dello Sport Eugenio Camillo Costamagna and the editors Armando Cougnet and Tullo Morgagni were the initiators of the first Giro , inspired by the Tour de France . It was financed with the help of the Italian Cycling Federation, the Corriere della Sera and various company sponsors.

Since 1909 , the Giro has been held every year - with the exception of the First and Second World Wars - for three weeks in May and leads across Italy and neighboring countries in alternating routes . The first Giro d'Italia started on May 13, 1909. It led in eight stages from Milan to Naples and on another route back to Milan, where the finish line was on May 30th. Overall winner was Luigi Ganna .

In 2005 the men's race was added to the newly created UCI Pro Tour . However, due to pressure from the organizers for the 2008 season, the tour was withdrawn from the racing series. Since 2011 the race has been part of the successor series UCI WorldTour .

Depending on the landscape of Italy , the course is made up of alternating flat stages , which sprinters prefer, medium-difficulty stages , which are suitable for breakaway groups, and high mountain stages , on which the tour is often decided. In addition, there are usually two individual time trials.

→ Main article : List of winners of the Giro d'Italia

Three drivers hold the record of five overall victories each in the Corsa Rosa : the Italians Alfredo Binda and Fausto Coppi won between 1925 and 1933 and between 1940 and 1953, respectively, the Belgian “cannibal” Eddy Merckx achieved his victories between 1968 and 1974.

Most stage victories has Mario Cipollini have, who celebrated his 42nd success since 1989 in 2003 and the age-old record of Alfredo Binda (41 stage victories) exceeded. With nine wins in a single Giro, Alessandro Petacchi set a post-war record in 2004.

Pink jersey of the leader in the general classification

The leader of the overall individual classification wears the Maglia Rosa - the Italian counterpart to the yellow jersey of the Tour de France. The color scheme is based on the pale pink paper of the Gazzetta dello Sport , the organizer of the Giro.

Since 2015, the firsts on all stages except the 20, 12 and 8-second time trial stages have been awarded a time bonus in the overall ranking; the first three of the intermediate sprints 3, 2 and 1 second.

Cycline red jersey of the leader in the points classification

The leader of the points classification has been wearing a cyclamen jersey ( Maglia ciclamino ) since 2017 . From 2010 to 2016, the Maglia Rossa (red jersey) was awarded for this. You can collect points for this classification when you arrive at the finish and in the intermediate sprints during a stage. Since 2013 , two intermediate sprints have been held on each stage. Before that, there was only one intermediate sprint per stage. Intermediate sprints are not only carried out on the flat, but can also be on inclines. In contrast to the Tour de France , where there are more points in flat stages than in mountain stages, the same number of points was awarded at the finish of each stage in the Giro until 2014. As a result, the points classification was often won by class drivers. In 2012, Joaquim Rodríguez won the Maglia Rossa one point ahead of Mark Cavendish . Since 2015, the awarding of points has also been differentiated according to stage categories at the Giro.

For the first riders to finish a stage and an intermediate sprint, the points in 2019 were awarded as follows, depending on the type of stage:

In the event of a tie, the following decides:

Azure jersey of the leader in the mountain classification (from 2011)

Mountain evaluations have been carried out during the Giros since 1933 . From 1974 to 2011 , a green jersey ( Maglia Verde ) was awarded to the leader in the mountain classification . In 2012, the color of this leadership jersey was replaced by the azure Maglia Azzurra .

There are points on the peaks of mountains or on hills. This depends on the length and difficulty of the climb. The highest point in a giro has the most points. The rating is called Cima Coppi in honor of Fausto Coppi , the five-time winner of the Tour of Italy.

The following scheme applied for 2015:

The only German winner is Fabian Wegmann , who was able to wear the green jersey in 2004.

White jersey of the leader in the youth competition

The white jersey has been awarded to the best young riders under the age of 25 with interruptions since 1976. The wearer of the white jersey (Maglia Bianca) is determined on the basis of the overall classification, in which all drivers that are not relevant for the classification are deleted from the same.

The Classifica giovani rating was not held between 1995 and 2006. In the meantime, the blue jersey was awarded instead of the white jersey. In 2007 the rating and the white jersey were reintroduced.

The first white jersey winner in the history of the tour was the Italian Alfio Vandi in 1976 . The first carrier since the reintroduction in 2007 was his compatriot Enrico Gasparotto .

The Giro is the only race in the GrandTours in which there are two team ratings . For the team classification Trofeo Fast Team , now also referred to as the winning team , the times of the best three drivers of a team are added up at each stage. This rating has existed since the first event and is the more important of the two team ratings. The team classification Super Team (formerly Trofeo Super Team ) is a team point evaluation in which the best 20 drivers at the finish of a stage receive between 20 and one point. This rating has existed since 1993 . There is also the Premio Fair Play for the team with the fewest pronounced penalties.

Black jersey for the last (historical)

Between 1946 and 1951, the “ black jersey ” was awarded to the last placed at the Giro . But since the "fight" for the jersey turned into a bizarre competition, it was abolished again.