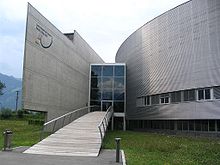 The headquarters in Aigle, Switzerland

The UCI's predecessor organization was the first international sports association, the International Cyclists' Association (ICA) , which was founded in 1892 and organized the first world championships as early as 1893 . On April 14, 1900, the UCI was founded in Paris by the national associations of Belgium , France , Italy , Switzerland and the USA . The first president was the Belgian Emile De Beukelaer . 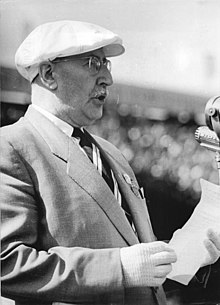 In 1965, were Fédération Internationale Amateur de Cyclisme ( FIAC , fr. For International Amateur Cycling -Föderation and) Federation Internationale de Cyclisme Professionnel ( FICP , fr. For International professional cycling -Föderation ) was founded. From then on, these sub-associations of the UCI organized the previously separate amateur and professional cycling, with top amateurs often practicing the cycling professionally as so-called state amateurs . Joint competitions between amateurs and professionals were rare and were referred to as open races (English for "open"). FIAC and FICP were dissolved in 1992 because of the abolition of the separation of amateurs and professionals (“standard license ”) in the course of the reform of the admission rules for the Olympic Games . The last UCI World Championships, divided into the categories “professional” and “amateur”, took place on the track in 1992 and on the road in 1995. The highest performance category in men's and women's cycling has since been uniformly referred to as the elite .

At the 185th Congress of the UCI, far-reaching changes to its own constitution were decided. The president's term of office was limited to three terms, making the UCI one of the first international associations to formally set this limit. A broader representation of the continental confederations (at least two members) on the UCI Management Committee was also planned. The number of voting delegates was increased from seven to nine for the African Cycling Federation .

In addition, rules of procedure have been drawn up to govern the conduct of future Congresses and to ensure that elections are conducted in a democratic, transparent manner. In future, the election congresses will be monitored by an external notary or lawyer. In the event of irregularities, these should be reported to the three-person ethics committee, which will be on site at the congresses. In future, the delegates entitled to vote should also be democratically elected by the national associations. The code of ethics was revised and its application to UCI and CADF employees, consultants and race organizers decided. President Brian Cookson expressed his conviction that these reforms would strengthen the UCI's credibility.

Self-view of the UCI

The UCI has formulated its tasks as follows (free translation from English):

The UCI organizes all cycling disciplines and organizes world championships and racing series for them:

The UCI also feels responsible for:

For the road cycling discipline, the cycling world cup and the UCI world rankings were replaced by the UCI ProTour in 2005, and by the UCI WorldTour since 2011 . This represents a racing series of the most important one-day and stage races . On a lower level there are the continental racing series, the UCI Continental Circuits , z. B. the UCI Europe Tour .

E-sports world championships are to be held for the first time in 2020 . On the Zwift platform, cyclists can take part in these competitions using roller training at home . The UK's first national esports championships were held in 2018. The German driver Tanja Erath was able to qualify for a professional contract in this way.

In July 2015, the UCI announced that it would host a UCI Cycling Gala for the first time on October 11 of the same year . The date was also the last day of racing on the Abu Dhabi Tour . Since then, the end of the road cycling season has been celebrated every year with the gala, at which the winner of the WorldTour is honored.

The organization and content of the UCI's positions are highly controversial. The credibility of its former President Hein Verbruggen is considered to be tarnished, since he took a clear stand for the multiple tour winner before the doping affair around Lance Armstrong became known and declared that he knew that Armstrong did not use any doping drugs.

The UCI is accused of having repeatedly dealt negligently with evidence of doping in the past and of relying on cover-up rather than education to the public. In contrast to the technical development, the progress of doping would therefore never be obstructed energetically despite fatal cases like Tom Simpson and for a long time it would be accepted with minor penalties. In the course of the election of UCI President Pat McQuaid in September 2005, the UCI and McQuaid's predecessor Verbruggen were accused of manipulation. The Tour de France 2008 was carried out under the supervision of the French Cycling Federation and no longer the UCI. In response, the UCI threatened participating teams with punishment and suspended the French Cycling Federation.

The Cycling Independent Reform Commission (abbr.CRIC, en., Dt .: Independent Cycling Reform Commission), set up by the UCI after Pat McQuaid was voted out of office by the new President Brian Cookson , published its results on March 9, 2015, on the investigation of the association's doping involvement . No evidence of bribery was found. However, the CRIC pointed to numerous violations by the UCI of the anti-doping regulations and of good governance principles during the tenure of McQuaid and his predecessor Verbruggen, in particular in favor of Lance Armstrong.

The procedures for doping offenses are the responsibility of the national cycling associations. As a result, there are always conflicts between the national associations and the UCI, which had to be submitted to the International Sports Court (CAS) for a decision . While the UCI conference at the 2014 UCI Road World Championships in Spain Ponferrada was decided Anti-Doping Tribunal to use in 2015 an independent international, impose the uniform penalties and to make the judgments within a reasonable time frame. On March 13, 2015, the UCI announced some changes based on the recommendations of the CIRC, in particular a stricter procedure for the allocation of Therapeutic Use Exemptions .

Critics also criticize the excessive regulation of the technical development of cycling. The development of new frame shapes is hindered by holding on to the traditional diamond frame . Aerodynamic seating positions and handlebars - as they were used in the world hour record - are also regulated too tightly. Alternative concepts such as the recumbent bike would also be left out, which would hinder their development in general sports. In contrast, proponents of regulation emphasize the aspect of more objective comparability of athletic performance.

Cycling race in the Crimea

In 2010, an athletes commission was set up for the first time, which initially consisted of partly elected and partly named athletes from all disciplines. As part of the reform of cycling by the newly elected UCI leadership in 2013 around President Brian Cookson , this commission was reformed in 2015. Members are selected in a two-stage process: First, the national associations nominate candidates: one athlete from the road, MTB, track, BMX and paracycling disciplines and one athlete from the cyclocross, trial and indoor cycling disciplines. Candidates must be active or have recently retired. For the first time, only the athletes choose their representatives from this group of candidates. Two representatives of the Olympic disciplines and one athlete from the non-Olympic disciplines are elected according to the selection of candidates.

In June 2015 the athlete representatives were presented:

The UCI has maintained the International Cycling Center in Aigle, Switzerland, since 2002 (French Center Mondial du Cyclisme , CMC for short; World Cycling Center , WCC for short). This includes a 200-meter-long wooden cycling track , several gymnastics and fitness halls, outdoor facilities for mountain bike and BMX training, a field for ball ball and artificial cycling, several seminar and classrooms as well as the International Cycling Museum and archive. The UCI offices are also located within the complex.

Young cyclists from all over the world who have received an Olympic scholarship train here in the Olympic cycling disciplines on the track and road, on mountain bikes and BMX. Professional trainers are also trained in an academy. The interior of the track is used for other sports such as gymnastics, trampoline and athletics.

On October 30, 2014, Austrian Matthias Brändle set a new hour record on the facility's cycle track with 51.852 kilometers . He improved the only one and a half month old record of the German Jens Voigt by 737 meters.

In addition to the CMC (WCC) in Aigle, the UCI is gradually setting up further training centers around the world, so-called "WCC Satellite Centers".

The World Cycling Center in Shuzenji , Japan, was opened in 2002 in cooperation with the Japanese Olympic Committee , the Japan Keirin Association , the Japan Cycling Federation and the UCI. Today the center is located in the Izu Velodrome . Since then, around 800 athletes from 22 different national associations have been trained there, including six later Olympians, such as Lee Wai-sze from Hong Kong , who won a bronze medal in the keirin at the 2012 Olympic Games in London .

In 2005 Potchefstroom opened the World Cycling Center Africa (WCCA) near Johannesburg , South Africa . Its director is the former world-class track cyclist Jean-Pierre van Zyl . Well-known African drivers who have trained in the WCCA include: a. the multiple African champion Daniel Teklehaimanot from Eritrea , who in 2015 was the first African to wear the spotted jersey of the leader in the mountain classification at the Tour de France , the multiple Moroccan champion Adil Jelloul and the two-time African champion Natnael Berhane from Eritrea. In 2013 a WCC was opened in Korea with two locations, in the KSPO Keirin Training Center in Yeongju and in the Velodrome in Yangyang . In November 2015, a fourth center was inaugurated in the New Delhi Velodrome. It is located in the Indira Gandhi Sports Complex , which was built for the 2010 Commonwealth Games .

In 2014 there were plans to open another WWC in the south of Sinai .

President of the UCI