One- day races (also road races or one-way driving ) are road bike races which, unlike stage races , are completed with the arrival of the finish and the first rider to reach the finish is the winner.

The lengths of one-day races can vary greatly, but with a few exceptions they do not exceed 200 or 250 kilometers for the UCI WorldTour races for the men's elite . International one-day races are held exclusively in cycling teams according to the regulations of the World Cycling Federation UCI .

The term one-day race is to be distinguished from other cycle races that are held on one day, especially the time trials , in which the cyclists or cycling teams start separately and the winner is determined according to the times driven. However, time trials that do not take place as part of a stage race are included by the UCI as one-day races in the racing calendar, so that, depending on the definition, time trials can also be counted as one-day races. The pair of terms road racing-time trial is then used for further delimitation.

Criteria and circuit races are held on mostly urban circuits between 800 and 10,000 meters. Typically, such criteria are not official UCI races, but so-called fair races , in which only prize money and not world ranking points are driven. Especially after the Tour de France , these races serve to show the cycling stars up close to the audience. One-day races, on the other hand, are held either as long-distance journeys with separate start and destination locations - this is often referred to as long-distance journeys - or on circuits of at least 10 km; Target circuits must measure at least 3 km (with a maximum of 3 laps), 5 km (with a maximum of 5 laps) and 8 km (with a maximum of 8 laps).

In marathons it is according to the rules and terminology of the International Cycling Union UCI not about day-races in the true sense, but "other road race" if only licensed cyclists participate or to Jedermannrennen , though participating warriors.

One-day races are the oldest cycling discipline. The first competitions on bicycles can be dated to the 1860s. The first one-day races in today's sense could only establish themselves permanently at the beginning of the 1890s, for example Paris-Brest-Paris (first 1891) over the mammoth distance of 1200 km, Bordeaux-Paris (600 km, first 1891) and Paris-Brussels ( 400 km, for the first time in 1893). Around Berlin is the oldest German one-day race , the oldest one-day race still being driven in Germany is the classic around the Hainleite in Erfurt.

Undoubtedly the most important one-day race in cycling is the road cycling world championship , which has been held at different locations every year since 1927.

At the Olympic cycling competitions , a road race in the form of the one-day race was held for the first time in 1896. The importance of the Olympic Games for men's road cycling is less than in many other Olympic sports, especially since professional cyclists were not permitted until 1992.

Classics and monuments of cycling 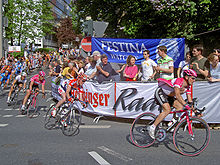 Around the Henninger Tower 2005: in third place the eventual winner Erik Zabel

The most prestigious one-day races are called classics , and depending on the time, they are also called spring classics or autumn classics . Today's most famous classics are the five so-called “ monuments of cycling ”: Milan – Sanremo , Tour of Flanders , Paris – Roubaix , Liège – Bastogne – Liège and Lombardy Tour . In general, Paris tours are also counted among the classics . Important one-day races for which the classic status is disputed are often also called semi-classics or modern classics .

Important one-day races for men - regardless of their status as classic - are summarized in the UCI WorldTour (2005 to 2010: UCI ProTour ). The only German race in this series are the Cyclassics Hamburg . Before the ProTour, the most important one-day races were part of the cycling world cup .

Both the UCI Road World Championships (since 1958) and the Olympic Games (since 1984) take place on the road for women.

Other important women's cycling day races have been combined as a series by the UCI World Cycling Association in the UCI Women Road World Cup . This racing series was replaced in 2016 by the UCI Women's WorldTour , which also includes stage races.