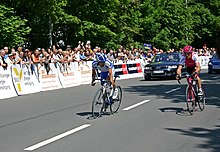 Jan Ullrich (r.) At the race around the Hainleite 2004

The classic Rund um die Hainleite was Germany's oldest cycling race that was still ridden until 2013 . This race has taken place since 1907. It led from Erfurt through the north of Thuringia and back to Erfurt. In the early years, the race ran over a distance of around 350 kilometers. It was later shortened to around 170 kilometers.

The highlight was the last few kilometers. Then it went several times through the Arnstadt Cave in the Erfurt Steigerwald, a steep, narrow ascent with a length of around 1,000 meters.

From 2008 the race was no longer held as a one-day race for professionals. Instead, it was integrated into the Thuringia tour for U23 drivers - which has now also been discontinued - as a start or end stage until 2013 .

As a stage of the Thuringia tour