The title of this article is ambiguous. For the German soccer player, see Jens Voigt (soccer player) . 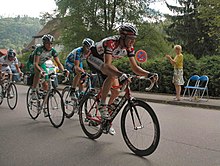 Jens Voigt in the couple time trial in Bühl 2006 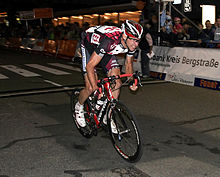 Jens Voigt at the Entega Grand Prix 2007 in Lorsch

Jens Voigt shortly before the start of a race

Jens Voigt (born September 17, 1971 in Grevesmühlen , Rostock district , GDR ) is a former German cyclist . After his active career, he worked as a television commentator for cycling races and as a consultant for cycling teams .

Jens Voigt grew up in Dassow . He began his competitive sports career at TSC Berlin . Voigt was one of the most popular professional cyclists due to his aggressive riding style. Among other things, his “fresh and aggressive driving style” was praised. From 2005 to 2007, he was voted by readers of trade magazine cycling for cyclists of the year selected.

After Voigt won the Peace Ride as an amateur in 1994 , he became a professional in 1997 with the Australian cycling team ZVVZ-GIANT-AIS . In 1998 he switched to the French team GAN and competed with them on his first Tour de France .

Voigt's greatest successes include his five overall victories in 1999, 2004 and 2007 to 2009 in the two-day stage race Critérium International , his two successes in the Deutschland Tour in 2006 and 2007 and in the Tour of Poland in 2008. At Liège – Bastogne – Liège in 2005 he achieved his best position in a cycling classic and was only beaten in the two-man sprint by Alexander Vinokurow , with whom he had attacked over the last 54 kilometers.

In 2014, after his 17th participation in the Tour de France , the now 42-year-old Voigt announced his retirement at the end of the season. He ended his street career after the USA Pro Challenge in August.

On September 18, 2014, he exceeded the nine-year-old hour record of the Czech Ondřej Sosenka over 49.700 kilometers in the Velodrome Suisse with 51.115 kilometers. Only six weeks later this world record was improved by another 737 meters by Austrian Matthias Brändle . Voigt canceled a start originally planned for January 2015 at the Berlin six-day race .

Jens Voigt became known to a wider public through his achievements in the Tour de France , in which he started every year from 1998 to 2014 and which he finished 14 times until 2014. By 2018 he was a record participant of the tour with his 17 participations together with George Hincapie (USA) and Stuart O'Grady (Australia). In 2018 this record was broken by Sylvain Chavanel .

Voigt finished his Tour de France debut in 1998 in 83rd place overall and wore the polka dot jersey for one day . At the 2001 Tour de France he wore the yellow jersey for one day after finishing second behind Laurent Jalabert in the seventh stage through the Vosges . In the 16th stage through the French Massif Central , Voigt finally achieved his first stage victory after a long escape, which, unlike in previous years, he completed successfully.

In 2004 Voigt competed in the Tour de France for the first time for the Danish team CSC . During the mountain time trial to L'Alpe d'Huez , he was insulted by some German fans because he had dropped back from the leading group the day before to parry an attack by Jan Ullrich for his captain Ivan Basso . He blamed the comments made by the then ARD sports director Hagen Boßdorf for the heated atmosphere.

On the ninth stage of the Tour de France 2005 from Gérardmer to Mulhouse , Voigt was able to become third in the stage after an escape over 150 km and took over the yellow jersey for one day. After the eleventh stage from Courchevel to Briançon , however, he had to end the race after, weakened by fever, he exceeded the prescribed time limit by a few seconds.

At the Tour de France 2006 , Jens Voigt won the 13th stage from Béziers to Montélimar from what was originally a five-man breakaway group . The stage was very hot and the peloton was 29:57 minutes behind.

The following year, during the Tour de France 2007 , Voigt compared ARD and ZDF with the GDR regime after they had decided to boycott reporting during the tour after another doping case became known . ARD and ZDF wanted to patronize the people, so his criticism.

On the 16th stage of the Tour de France 2009, Voigt fell 30 km before the stage finish in the last descent from the Little Saint Bernard in the direction of Bourg-Saint-Maurice as a result of a change of surface on the road and suffered a fracture of the cheekbone , a concussion and a broken jaw to.

On his last Tour de France in 2014 , he wore the polka dot jersey for one stage and finished 108th in the overall standings.

In 2007 Voigt was the spokesman for the Cyclistes Professionnels Associés (CPA).

Although several drivers from Voigt's Team CSC were convicted of doping for years, Voigt stated that he had never noticed anything about doping in the team.
The former American professional cyclist Tyler Hamilton accused Voigt in the fall of 2012 of stabbing him in the back during doping education and said Voigt's statement was the most ridiculous thing he had read in his life.

After a career as an active athlete

After saying goodbye to active cycling, he first became a consultant in his Trek Factory Racing team and later became a brand ambassador for the bike manufacturer. He is also a TV commentator on the Tour de France for the US broadcaster NBC .

At the beginning of January 2017, Voigt completed a charity trip on the Teufelsberg in Berlin for the benefit of cancer patients and climbed 8,848 meters in altitude . At times he was accompanied by several hundred amateur cyclists. More than 25,000 euros in donations were collected.

Jens Voigt lives in Berlin with his wife and their six children .

Overall winner of the Deutschland Tour and its previous events

The Germany tour was not held continuously.

Only the results from 1948 are listed. For the time being, the last time this discipline was played in 1994 at German championships.