The 92nd Tour de France began on Saturday, July 2nd, 2005 in Fromentine in the Vendée department and ended on Sunday, July 24th on the Avenue des Champs-Élysées in Paris . 189 racing drivers took part in the tour, 155 of which were classified.

Instead of a prologue , the 2005 tour began with an individual time trial on the Île de Noirmoutier . After a week, the Tour de France returned to Germany for the first time since 2002 . Karlsruhe was the destination of the seventh stage on July 8th, one day later Pforzheim was the starting point of the eighth stage of the tour. The 2005 Tour de France was held in a clockwise direction so that the riders headed for the Alps first and then the Pyrenees . In total, the tour led over 3593 km in 21 stages.

Lance Armstrong won the overall standings for the seventh time in a row, improving his already historic record. He also won the team time trial and the second individual time trial. Ivan Basso , who was third last year, came second. Jan Ullrich , followed by a streak of bad luck in the first week, achieved third place. This was revoked on February 9, 2012 after a CAS judgment. On October 22, 2012, the UCI World Cycling Federation announced the cancellation of all Armstrong titles since August 1, 1998, including all of the American's Tour de France successes. Successors to first place were not used. The place was not filled.

The points classification was won by Thor Hushovd , ahead of the two Australians Stuart O'Grady and Robbie McEwen . Although the Norwegian had not won a single stage, he scored his points primarily through good placements at the finish and in the intermediate sprints. He also benefited from Tom Boonen's injury-related absence .

The surprise man of the tour turned out to be the Dane Michael Rasmussen , who won the mountain classification ahead of Óscar Pereiro and Lance Armstrong. In the overall standings he was in third place for a long time, but then fell back to seventh place in the second time trial after a series of breakdowns and falls.

As in the previous year, the T-Mobile team won the team classification .

The jury recognized Óscar Pereiro as the most combative driver .

The leadership in the team classification was taken over by Team CSC at the beginning , then from stage 14 to the T-Mobile team, which only had to hand it over to Discovery Channel after stage 17 and then turned out to be the stronger team despite the loss of Andreas Klöden . 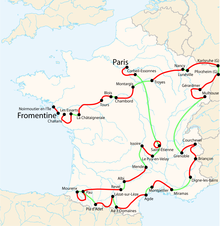 Jerseys in the course of the tour