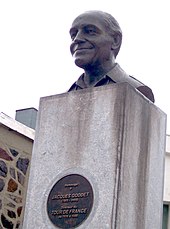 The Jacques Goddet souvenir is usually delivered on the Col du Tourmalet . In years in which the route does not lead over the Tourmalet, the evaluation will either not take place or be given on another mountain in the Pyrenees . The driver who is the first to reach the mountain classification will receive prize money of 5,000 euros. In 2019, Thibaut Pinot was the first to win the classification for the second time. So far, no winner of this special ranking has been able to win the tour.

The evaluation of these years was not held at the Col du Tourmalet: