The 37th Tour de France ran from July 13 to August 7, 1950 on 22 stages over 4,775 km. Last year's winner Fausto Coppi was unable to start after an injury sustained at the Giro d'Italia . 116 racing drivers took part in the tour, 51 of which were classified.

In the first week of the tour none of the riders was able to break away clearly, and the Frenchman Bernard Gauthier , who wore the yellow jersey for a few days , was not a candidate for the overall victory with a lead of nine minutes. Already on the first stage of the Pyrenees he lost over 20 minutes on the top and fell back.

On the eleventh stage to Saint-Gaudens attacked Gino Bartali , tour winner in 1938 and 1948 . Although he won the stage and his team-mate Fiorenzo Magni was the overall lead, the two Italian teams gave up after this stage in protest. On the Col d'Aspin , Jean Robic caught up with Bartali who had previously run away, but aggressive fans toppled both drivers. Even after the fall, Bartali was further harassed by the partly drunk fans and gave up the race in frustration after his stage victory.

Fearing protests from Italian fans, the tour management relocated the route of the 15th stage, which was supposed to end in Aosta , Italy , to Menton just before the border with Italy. With the withdrawal of the Italian teams, the Swiss Ferdy Kübler , who had already won the individual time trial on the sixth stage, got into the leading position, which he did not relinquish until the finish in Paris. However, on stage 12, he refused to wear the yellow jersey. It wasn't until the following day that someone wore this jersey again. With his further stage successes in Nice as well as in the second individual time trial, he extended his lead.

Kübler fended off the attacks of the second and third placed Stan Ockers and Louison Bobet . Bobet, who also won a mountain stage, at least won the mountain classification.

On the 13th stage, a story occurred that tour commentators will still be happy to tell in the 21st century: The Algerian Abdel-Kader Zaaf consumed two bottles in the scorching heat of the Languedoc when he tried to break away together with the eventual winner of the day Marcel Molinès Wein, then took a short nap on the side of the road and, after the spectators had woken him up, cycled back towards the starting point of Perpignan . 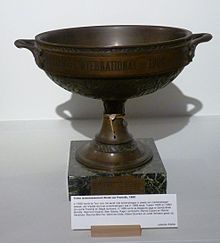