This article is about the French city of Pau. For further meanings of the term Pau, see Pau (disambiguation) .

Pau [ po , Occitan pau ] ( Basque Paue ) is a city in the French region of Nouvelle-Aquitaine and with 77,130 inhabitants (as of January 1, 2017) the largest city in the Pyrénées-Atlantiques department and the fourth largest city in the region. The city is the seat of the prefecture of the department. The prefecture also administers the Pau arrondissement . It is the main town ( French chef-lieu ) of the cantons Pau-1 , Pau-2 and Pau-3 and Pau-4 . Until its dissolution in 2015, it was already the capital of the cantons Jurançon , Pau-Center , Pau-Est , Pau-Nord , Pau-Ouest and Pau-Sud . In 2017, Pau was awarded the honorary title “ City of the Reformation of Europe ” by the Community of Evangelical Churches in Europe .

The city of Pau is located on the Gave de Pau river in the south-western foothills of the Pyrenees, a good 215 km south of Bordeaux and approx. 195 km south-west of Toulouse at an altitude of approx. 215  m . The pilgrimage site of Lourdes is located approx. 58 km south-east. The climate is temperate; Rain (approx. 885 mm / year) falls over the year.

The mechanization of agriculture and the abandonment of small farms led to rural exodus in the 20th century. The neighboring town of Lescar is now taking in a large proportion of the immigrants. 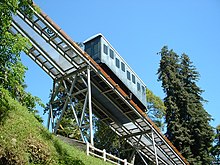 Pau funicular - one of the city's tourist landmarks

Pau is connected to the French high-speed TGV network. There are high-speed connections to Bayonne and Dax (further via Bordeaux to Paris ) and Tarbes (and further to Toulouse ).

In addition, local trains have been running to Oloron-Sainte-Marie again since 2011 (on the Pau – Canfranc railway line , which was closed from 1970/1980 ); Since July 2016, the railway line has been in operation again to Bedous - an extension of the currently closed line to Canfranc (Spain) is planned.

Approx. 7 km outside the city is the Pau Pyrénées Airport , from which Amsterdam , Brussels , London and Bristol, among others , are served.

Pau has a long tradition as a university town. The first university was founded in 1722. Today it has an interdisciplinary university (law, economics, natural sciences and human sciences), two IUTs (Institut Universitaire de Technologie) and an IAE (Institut d'Administration d'Entreprise).

Pau owes its origin to a castle built by a Count von Béarn at the beginning of the 11th century , which was built in the second half of the 14th century by Gaston III. expanded and strengthened by Foix-Béarn. This increased the status of the place and the Vice Counts of Béarn stayed here frequently. Gaston IV of Béarn-Foix declared in 1464 that he wanted to set up his residence here in order to attract more people to Pau . In 1464 he granted the town market rights and set up jurats . He allowed the Jurats on the condition that they surround the place with walls and build a church, through a patent dated March 19, 1468, to collect a tax on wine and other goods traded in Pau. The walls were only half finished, but the church was completely completed in 1473, so that it could be inaugurated by the Bishop of Lescar, who determined the right of occupation for himself and his successors .

Pau gained greater importance due to the fact that its lords, the Vice Counts of Béarn, with François Phébus , the grandson of Gaston IV, also became kings of Navarre in 1479 . The population soon increased to such an extent that Jean d'Albret and his wife Katharina made the town a city by means of a patent dated November 4, 1502. After Ferdinand the Catholic had conquered the part of Navarre south of the Pyrenees , the Vice Counts of Béarn, who had been expelled from there, moved their residence from Pamplona to Pau in 1512 . The city remained the seat of government until 1589 and gradually became the seat of a sovereign council, a parliament and a mint . Jesuits and other monastic and women's orders also soon settled here . Since 1527 Pau gained special importance as the residence of the witty, Huguenot-friendly Margaret of Navarra . Their daughter Jeanne d'Albret gave birth to the future King Henry IV in Pau in December 1553 .

Catherine de Bourbon , the sister of Henry IV, held court in Pau when she ruled Béarn on her brother's behalf. However , Pau suffered a lot in the wars of religion . In 1620 it came through Louis XIII. to the French crown domain . The university, founded here in 1722, had five professors who taught canonical, civil and French law as well as the fine sciences. It was abolished after the French Revolution , and the Academy of Science and Art, founded in 1721, also later died. In the wake of the February Revolution of 1848 , the captured Abd el-Kader was brought from Fort Lamalgue near Paris to the castle of Pau on April 23, 1848 , where he lived with his family for a long time.

The city of Pau is famous for its annual motorsport events. Similar to Monaco and Macau , a narrow street circuit ( Circuit de Pau ) is used between the houses.

Eleven Formula 1 races were held by 1963, but they did not count towards the world championship. After that, Formula 2 races and the Formula 3000 European Championship took place here until 1998 . International Formula 3 races have been held on this racetrack since 1999 . The most successful driver in Pau is Jim Clark , who won this race twice in F1 and F2. In 2007, 2008 and 2009 WTCC races were held in Pau.

Because of its proximity to the Pyrenees passes, Pau is very often one of the stage towns of the Tour de France . So far, the tour has stopped in Pau 62 times, again in 2017. This makes Pau third in the list of the most popular tour cities after Paris and Bordeaux .

In eventing , the Étoiles de Pau are among the six most important tournaments in the world.

With Élan Béarnais Pau-Orthez , the city is one of the most important French basketball clubs . Overall, the team was French champions nine times and won six cup titles. In addition, the team was able to win the Korać Cup in 1984 , a former European Cup title.

Another well-known sports club is Section Paloise . Their rugby union team is represented in the top 14 French professional league . And in football , FC Pau represents the city, but has so far not got beyond membership of the third division .

In Billère is located with the Pau Golf Club from 1856 is the oldest golf club of the European continent.

A large pelota facility was added in 2005 . There is also the famous horse racing track “Hippodrome de Pau” in Pau, where both flat and obstacle races take place regularly.

Municipalities in the Arrondissement of Pau (A – J)

Municipalities in the Arrondissement of Pau (L – V)