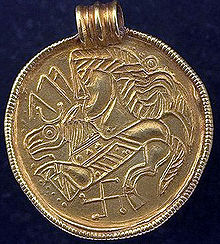 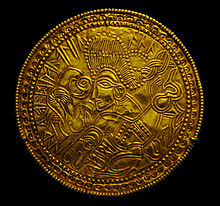 Replica of one of the Tjurkö bracteates with runic script from around 500 AD.

Bracteates (from Latin bractea "thin sheet of metal") are coins or medals that have been stamped on one side and on a soft surface from a thin sheet of metal (usually silver or billon ). B. to the double-sided denarii or the thin pennies (half bracteates). The term bracteate is not a contemporary term and was first used for this type of coin in the 17th century.

The Germanic bracteates of the migration period of the 5th and 6th centuries are circular decorative discs made of precious metal, embossed on one side by dies . The bracteates have their origin in the imitation of late antique Roman imperial medallions . Of the more than 900 bracteates found so far, around 300 each come from Denmark and Sweden , 190 from Norway , 30 from England and 20 from the European continent south of Denmark. The largest concentrations are in Gotland and western Norway.

In addition to the presumed images of deities, animals are shown, including pigs, birds, imaginary creatures and horses. The horse pictures often stand out due to their stylized forelegs ( animal style ). About a third of the bracteates wear runes , which can only be partially interpreted as texts. In general, research sees the bracteates as the magical function of amulets. The bracteates are divided into five main types according to their motifs: A-, B-, C-, D- and F-bracteates, which in turn are divided into families of forms. The motifs are shown in simplified form:

For mythology , the bracteates are less important because of their runic inscriptions, but because they quickly abandoned the imitation of the Roman imperial portrait in the pictorial representations in favor of depicting Nordic ideas and thus provide a wealth of visual material from an otherwise poorly written time.

Silver bracteates with depictions of Frederick I , 12th century, Frankfurt am Main

Medieval bracteates (hollow pennies) are pennies embossed on one side from thin sheet silver with a diameter of 22 to 45 mm. The coin image appears in high relief, while the reverse remains hollow. The large area left a lot of space for artistic presentations.

From the middle of the 12th century to the 14th century, bracteates were the predominant regional type of coin in almost the entire German-speaking region (with the exception of the Rhineland , Westphalia and the Middle Rhine region). In terms of currency history, bracteates are typical of the regional penny currencies of the time.

In some regions, the bracteates were disreputed at regular intervals and had to be exchanged for new money. In Magdeburg this happened twice a year in the 12th century. There were z. B. to change three new coins for four old ones. The 4th coin withheld was called Schlaggeld and was often the only tax revenue of the mint owner ( Renovatio Monetae ). The reputation disrupted the business interests of all those who were involved in the money economy at the time , namely the traders who dominated the German city leagues. The city federations then introduced a so-called "Eternal Penny" from 1413 . With the end of the disreputations, the end of the bracteate era began and the thicker, double-sided pennies that were customary before were minted again. The last bracteates were wandering bracteates, i.e. the presence of pilgrims, and were in use until the 17th century.

For the Brakteaten there for an old Handelslexicon of 1848, the German name Strubben because they are "reluctant" in packaging. In some Swiss cantons brakteatenartige were until the 18th century centimes , Haller and angster made. In contrast to normal coins, bracteates were not transported in purses, but in "bracteates", where up to 40 pieces could be placed on top of each other.

A form common throughout the Middle Ages is the hollow pfennig (bowl pfennig or thin pfennig due to the thin sheet metal). In northern Germany it was probably adopted by the Danes or Slavs as early as the 10th century, but at least it has been in use from the 12th to the 16th centuries.

Most of the Meissen bracteates were provided by the Freiberg Mint between 1170 and 1300 .

Three values ​​were common, a two- penny piece ( Blaffert ) with an elaborate picture, a one-penny piece (also called hollow pfennig) with a rough picture and hollow coins worth half a penny ( Scherf ). All three have in common that they were struck with a curved edge, which is often decorated with rays. They do not have a numerical value or text, some have letters on them. A special feature of the bracteates is the occurrence of divided pieces. Since such pieces can also be found in hoards, it is assumed that such divisions were common and not just accidentally occurred: in order to pay the agreed price, the coins were simply divided.

The material is almost exclusively silver, hollow pennies made of gold or copper have only been found very rarely, although their authenticity is questionable. The example of a presumably high medieval gold bracteate that was offered at auction triggered controversy about its authenticity. The numismatist Häberle believed the copy to be a product made by the Prague coin forger Kilian from the 19th century.

The embossing technique varied depending on the region and epoch. Most of the guys were round and of different sizes. In some regions square planets were also used, so that the embossing process resulted in a four-lobed shape. When minting thinner coins, several coins were sometimes produced "one on top of the other" at the same time, which results in the appearance of many hollow pennies being blurred. When individual coins were struck, the flan was placed on the recessed form and struck into the form with a leather-covered stamp.