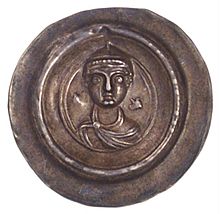 The mint Freiberg was highly likely, as is the mint of Leipzig , during the reign of Otto the Rich founded (1156-1190), but only 1,244 documented to have. With the establishment of the Dresden mint , Elector August (1553–1586) had all state coins closed. The state main mint in Freiberg had to cease operations in 1556.

The tasks of the Freiberg mint, which was most likely founded by Otto the Rich, Margrave of Meissen , arose from the Meissen mountain constitution, the Freiberg mining law , in which the obligation to deliver the silver was stipulated. The legal sentence “All silver belongs in the Freiberg mint” was written into the city law book. The mint master had to buy up the mountain silver at a price set by the sovereign and produce coins for it.

With the establishment of the city of Freiberg around 1162/1170, the first Meißnian mint soon came into being. The first documentary evidence, however, does not appear until 1244, when Henry the Illustrious (1221-1230-1288) donated a Seelgerät with six pound pfennigs (1 pound = 240 pieces) in the cathedral church in Meissen for his parents , which are collected from his Freiberg coin should. The first mint master known by name around 1289 was Nicolaus de Zibislawicz. He is proven as a ministerial and at the same time as Freiberg councilor and mint master.

Most of the Meissen bracteates , called denarius ( pfennig ) in their time , the regional pfennigs, were provided by the Freiberg Mint between 1170 and 1300. It had been the state main mint of the Meissnian-Saxon princes since the 13th century. The handling of the hollow pennies was regulated in Freiberg city law. After a year, the Freiberg Brakteatenpfennige, twelve old for nine or ten new ones, had to be exchanged. The old ones were declared invalid and replaced by new coins with new coin designs. However, if old Freiberg pfennigs were used to pay, the mint master was allowed to “break” the coins. They were then useless for trading. Anyone who came from another currency area to trade had to exchange the coins they had brought with them for common ones at a loss. The exchange fee was one of the income of the mint master.

In order to create stable conditions for trade and industry, it was mainly the trading cities that were interested in taking coinage into their own hands. Several cities took advantage of the opportunity to lease the mint or to purchase it in order to mint their own coin, the so-called Eternal Penny , which was not subject to the annual coin call . In the Meissen currency area, however, the limited validity of the pfennigs was sufficient, as the major part of trade was only regional, mostly only between village and town.

Elector Friedrich III. with his brother Johann and Duke Albrecht, half a sword coin 1492, Freiberg

After the penny currency was replaced by the Meissen groschen introduced by Margrave Friedrich II (1323–1349) around 1338/39 , the Freiberg coin was minted on a large scale based on the model of the Prague groschen , Meißner groschen , which had been minted in Bohemia since 1300 . When converting the currency in the Margraviate of Meissen , as in the Kingdom of Bohemia, Italian financial advisors were consulted. Two of them, Agostino (Augustin) and Nicolao (Nicolaus) of Florence , known as the whales , ran the mint as mint masters in Freiberg from 1364 to 1368. Probably the achievements of the last two mint masters, Henselin Schickel and Johannes Münzmeister, did not meet the expectations of the Wettin mint masters . The broad groschen of the two mint masters Augustin and Nicolaus von Florenz, which were minted in Freiberg until 1368, were particularly popular. They were later highlighted as "whale groschen" when offsetting, because it was the last Meißner groschen that were paid out on the basis of the value of the full Florentine guilder . The currency adjustment to the new, lighter Rhenish guilder as the basis for the Meissnian groschen currency took place in sections from 1368 to 1369. The new Meissen groschen, until around 1382 known as the wide groschen, became the leading monetary unit in Central Europe alongside the Prague groschen.

At the end of the 14th and 15th centuries, in addition to their main mint in Freiberg , the Wettins established other mints in Sangerhausen , Zwickau , Gotha , Leipzig, Weimar , Colditz , Wittenberg and Langensalza , some of which were only in operation temporarily. The Freiberg Mint remained the state's main mint until it was closed.

As a result of the high spending policy of Margrave Wilhelm I (1382–1407), the land and population were heavily burdened. In 1401 the margrave acquired the village of Kötzschenbroda with the first vineyards of the later Hoflößnitz and in 1402 the Colditz rule with 52 associated villages, in the same year he conquered Dohna Castle , which resulted in the loss of the original rule of the burgraves with all of their associated land . In addition to special tax levies, an increasing deterioration in the coin was the inevitable consequence. In 1406 Wilhelm I's Meissner groschen, the cross groschen, only contained 3.8 lot (0.237 f.) Silver. In terms of value, 53 pieces corresponded to the Rhenish guilder. The foreign cities countered the increasing deterioration of coins by counterstamping the still good Meissner groschen. It was not until 1412 that Frederick the Arguable (1381-1428) succeeded in stabilizing the groschen currency on the basis of 20 shield groschen on the Rhenish guilder. Around 1424, Friedrich, elector of Saxony since 1423, temporarily relocated the Freiberg mint to Gotha , presumably for security reasons ( Hussite wars ).

The following types of Meissnian-Saxon groschen were struck in Freiberg in the Groschen period from 1338/39 to 1500 (designation according to KRUG):

Not mentioned herein meißnisch-Saxon Grosch types of Grosch time, the embossed French model Turnosegroschen (of 1457 in to 1461 Leipzig embossed), wholesale and diamond penny (of 1457 to about 1460 Gotha embossed), Bart penny (1492/93 in Zwickau and Snow Mountain minted) and Schreckenberger ( minted in Annaberg from 1498 ). The so-called Margarethengroschen are the Freiberg grosch types, shield groschen, sword groschen, 6 Heller groschen, pointed groschen and ½ pointed groschen, but all come from the Colditz mint.

In the Meissen penny period also are Heller and pennies been beaten in Freiberg.

The Meissnian guilder , which was used as an invoice coin until the 19th century, goes back to the Saxon coinage system of August 9, 1490, according to which the gold guilder in Saxony was set at 21 groschen.

The coin mandates of the Ernestine and Albertine lines of Saxony from May 1500, in which the transition to the large silver currency in the form of silver guilders to 7 Schreckenbergers or 21 interest groschen worth one full Rhenish gold guilder, resulted in the end of the Meissnian-Saxon groschen currency.

The first Saxon large silver coins, the so-called Klappmützentaler (gulden), were not minted in Freiberg in 1500, but in Annaberg and possibly in Wittenberg . The mints of Freiberg and Leipzig are demonstrably excluded; in Leipzig they were minted only in 1519 under mint master Ulrich Gebhardt. The Buchholz mint had only been in operation since 1505, the Schneeberg mint was closed from 1498 to 1501 and the Zwickau mint from 1493 to 1530. It was not until after 1525 that the Freiberg Mint minted large silver coins. Its fine silver content of 27.41 g corresponded in value to the gold value of the Rhenish gold guilder at the time . Despite the change of territories, forms of rulership and division of states, the mining town of Freiberg, including the mines and the mint, remained in the common possession of all Wettins until 1547 .

The coins of the mint

Location of the mint

The mint master Nicolaus Hausmann and his son Hans Hausmann, who had also been mayor of Freiberg since 1521, lived in Freiberg on Petergasse (today Petersstrasse), where the mint was moved from near the Nicolaikirche . Hans Weller, known as Molsdorf, mint master from 1540 to 1545, moved the mint to Burggasse (today Burgstrasse). The mint master and mayor of Freiberg, Andreas Alnpeck, had his apartment and the mint "in the large upper corner building on the market, on the left hand when you go to Petergasse". During his tenure in 1556, Elector August moved the mint to Dresden, although the council, citizenship, miners and miners had asked for it to be kept.

When he checked the coins in his mints in Freiberg, Annaberg and Schneeberg, Elector August found that the mint masters included the fine silver content, which, according to the regulations of the Saxon coinage system from 1549 ( coin base from 1549 to 1558) for the guldengroschen ( taler ) 14 Lot 8 Grän (= 902.78 / 1000) had been set, had reduced it without authorization. Size data for the reduction of the fineness were not known. The elector then had all state coins closed and transferred them to a single coin in Dresden, in the immediate vicinity of his residence palace , in order to be able to better monitor the correctness of the shot and grain . Another important reason for the closure of the Erzgebirge mints was the gradual decline in silver production in the mining districts after 1550. The main mint in Freiberg ceased operations in 1556. The new mint in Dresden became the central mint for the entire electorate.

Mint master of the Freiberg mint from 1353 (incomplete)

Around 1540 the letters FREIB, FRIB, FRIBE were used to mark the mint.