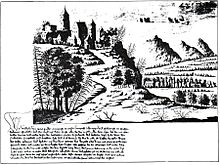 The old Dohna Castle. From the historical description of the world-famous Königstein fortress by C. Heckel. Dresden 1736.

The Dohna Castle , also called Donin , on the way to Bohemia was the ancestral seat of the Burgraves of Dohna . From the old, once stately double castle, only a small part of the wall remains. The remains of the old spur castle are located on the Schlossberg at 155  m above sea level. NN near the later development in the town of the same name in Dohna in the district of Saxon Switzerland-Eastern Ore Mountains in Saxony .

Defense system of the Sorbs

The area around the Schlossberg was already a settlement area for West Slav tribal groups in the early Middle Ages. The name of the associated settlement was Donin. The originally Slavic castle is said to have got its name from her.

It was from 1156 the center of the direct imperial castle counts of Dohna whose job it was an ancient trade route from Saxony to Bohemia to monitor the subject Sorbs in serfdom to keep and their Christianization advance by emissaries of the Catholic Church.

Dohna Castle until around the middle of the 12th century

The Dohna Castle was in connection with the dispute between King Heinrich III. (1039-1056) and Duke Břetislav of Bohemia in 1040 first mentioned in a document.

1085 married Wiprecht von Groitzsch , who later became Margrave of Meissen (1123-1124), Judith, the daughter of the Bohemian King Vratislav II (1061-1092). As a dowry, she brought the area in Gau Nisani and the area of ​​today's Upper Lusatia around Bautzen into the marriage. In 1112 Wiprecht von Groitzsch lost the Gau Nisani with the Dohna Castle to Heinrich V (1106-1125). When Groitzsch regained ownership in 1117, Bohemian sovereignty was restored. In 1121 Vladislav I of Bohemia (1109–1125) rebuilt Dohna, which was probably destroyed around 1113.

In August Schumann Staatslexikon of Saxony (1814), a castle will recite mentioned: [...] and was, as then every stronghold, sometimes used as Staatsgefängniß according to the fashion. At least in the year of the Second Battle of Chlumec , the Bohemian Duke Soběslav I had some of the great Bohemians taken to the castle dungeon at Dohna [...].

Of the burgraves appointed as imperial officials, only one Erkembert from the Tegkwitz family (?) 1113 is mentioned, documented as Erkembertus prefektus de castro Donin . It is also known that the Erkenbertinger family (attested as burgraves in 1113) came from Franconia , gained a foothold near Naumburg and played a role in their younger Starkenberg line, among other things in the colonization of the Ore Mountains .

The eponymous ancestral seat of the von Donin family 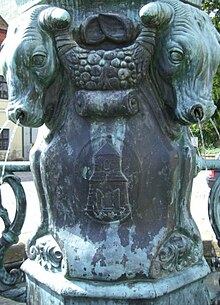 Castle tower of Dohna Castle at the butcher's fountain, inaugurated in 1912 by Alexander Höfer 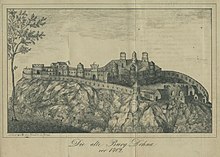 The old Dohna Castle before 1402. After a pen drawing by Grundmann in 1752. Originally a fresco on Pfeifer's estate in Gorknitz, which burned down in 1760.

As the progenitor of Donin, who ruled about 250 years down the dohna castle, Viscount applies Heinrich I. The investiture itself is not documented to be but has done no later than 1156, is when Henry first appropriate documentary mention as Burgrave of Dohna.

The strong Dohna Castle, on a rocky promontory 155 m above sea level. NN near the Müglitz , was the center of the manor and burgraviate Dohna . Here, who was Dohnaer Schoepp chair , one since 1390 attested Schöffengericht that to 1572 primarily in fief and successions to beyond the borders of Saxony had legal significance -.

It can be assumed that under the hereditary rule of the Burgraves of Donin, the castle was expanded into a stately double castle, consisting of a rear and front castle and a spacious forecourt. During the excavations of 1904/06 a transverse wall was found that separated the two castles.

The castle tower shown in the oval at the Fleischerbrunnen on the market square in Dohna, created in 1912 by the Dresden sculptor Alexander Höfer , corresponds to the tower in the oldest city coat of arms from 1525.

In his book Dohna, Stadt und Burg… (1843), Georg Friedrich Mörig compared two drawings of the old Dohna Castle, one from 1730 and the other from 1752. For the pen drawing from 1752, a mural on the Pfeifer estate in Gorknitz near Dohna served as a template. The estate burned down in 1760. Mörig wrote the following about the drawings:

It is too regrettable that we cannot present a true picture of the former Dohna Castle. Heckel has attached a drawing in his Königsteiner Chronik, but it cannot be recognized as correct. A drawing attached here seems to us to border on truth, which, along with the aristocratic stamp, was painted in fresco on the Pfeiferschengut in Gorknitz , was preserved until the subsequent fire in 1760, but before that in 1752 by the appellate court Secretair Grundmann drawn with the pen on the public royal. Library to Dresden is located in Barzschen's Koenigsteiner Chronik.

Loss, decay and use of the Reichsburg

As a result of the Dohna feud (1385–1402) between Burgrave Jeschke von Dohna and the Saxon nobleman Hans von Körbitz (Korbs), the Burgraves lost the lordship with the entire land belonging to it to the Wettins . The current state border between Saxony and Bohemia was formed when the neighboring Pirna Castle with the associated villages and the Königstein Fortress , to which Burgrave Jesche had fled, came into the possession of the Wettins in 1406.

From the autumn of 1401 on, Dohna Castle was besieged and, after long resistance, was taken by storm on June 19, 1402 in the presence of Margrave Wilhelm I the One-Eyed (1349 / 79–1407), but not completely razed. The residential buildings were preserved and became the residence of the administrators of the Margravial Care Dohna. When the bailiffs moved their seat to Pirna from around 1457 , the gradual decline of the castle began. In the following times, the citizens of the city of Dohna also promoted the decay of the castle by transporting them away. On a picture from 1690 by A. Nienborg and on a drawing by Goebel from 1793, extensive remains of the wall and tower can be seen.

M. Christian Bartsch, pastor in Dohna, described the remains of the castle in 1735:

[…] On this castle mountain one can still find rudera of old walls, towers and vaults, which they have already stood in rain and weather for 330 years without regard to them; yet of lime and stones are so strong that they can hardly be torn, but cannot collapse by oneself. The Swedes, when they stood here in 1707 , tried and wanted to break into a vault on this castle hill, perhaps thinking they would find a treasure, but soon had to slack off because of the strength of the walls [...] .

At the moment only a small part of the wall of the Donin Castle can be seen. Apart from this remains of the castle, there is almost nothing left of the old Dohna Castle.

In 1803 Heinrich Ludwig von Dohna bought the Schlossberg in order to rebuild the castle in the spirit of the emerging romanticism . For this purpose, the castle hill was cleared of rubble from the castle ruins and the construction of the round tower began. However, the Napoleonic Wars prevented the romantic plan from being carried out. Finally, the round tower was completed in its present form in 1830.

The "Privileged Rifle Society of Dohna" bought the Schlossberg in 1826 for 700 thalers and leveled the front part of the mountain. In 1828 she built the shooting house, the shooting wall and the retaining wall on the driveway from the stone material of the castle walls.

The present-day development on the Schlossberg consists essentially of the castle tavern, which was last used as an HO restaurant and dance hall, the former shooting house, and the round tower built in the style of the old castle, last used as a museum. Among other things, the local minerals of the Müglitz Valley, such as amethyst and agate , were shown here.

In the Burgschänke, formerly the HO restaurant "Burg Dohna", there has been a local history museum founded in 1906 on the upper floor since 1958. Today the museum is located in the former pharmacy property on the town's market square. Among other things, exhibits on the history of the castle such as finds from the Middle Ages, graphics and documents can be seen here.

The buildings of the Schlossberg, the round tower from 1830 and the former castle tavern, have been expanded into a meeting place by the Christian free church Eckstein congregation since 2005. The sponsor is the registered association Horizonte Weltweit Eckstein .

The castle complex is protected as a ground monument, as is the Sorbs ski jump on the back of the mountain tongue of the Robisch (Robsch, Robscher). This castle complex can still be seen on a ledge above the station area. The reference to the complex is made because a Sorbian defense system also existed on the Robisch before the settlement of the castle hill (Schlossberg) .