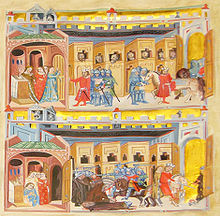 Břetislav kidnaps Judith von Schweinfurt from the monastery. From the Parisian manuscript of the Dalimil Chronicle, 14th century.

Břetislav I was the illegitimate son of Duke Oldřich . Although he later married Břetislav's mother, the farmer's daughter Božena (also called Beatrice), the marriage remained a mesalliance . Břetislav could only come to the prince's chair because none of his father's brothers had offspring. According to the chronicler Cosmas of Prague, Oldřich Božena met around 1002 in Postoloprty . It can be assumed, however, that he married her before 1002.

Břetislav is mentioned for the first time by Cosmas in 1021. He is said to have kidnapped his future wife Judith von Schweinfurt , the daughter of Heinrich von Nordgau , from a nunnery in Schweinfurt . After their return, Břetislav and Judith settled in Moravia . His ruling seat became Olomouc . He built new castles there. His first son Spytihněv was born in Olomouc .

From 1029 Břetislav was involved in driving out the Poles who held large parts of Moravia. This offensive was facilitated by the simultaneous attack by Yaroslav from Kiev on Poland. Břetislav's success in Moravia contributed significantly to the temporary stabilization of the Bohemian principality under his father Oldřich. Břetislav received Moravia as a part of the principality and tried in 1031 to occupy areas in southern Slovakia , but without lasting success.

After his father was captured in the summer of 1033 on the orders of Emperor Konrad II , Břetislav was to be enfeoffed with Moravia. From there, however, he was expelled by Oldřich after he was released from imperial captivity in 1034. The reason for the argument between father and son can no longer be determined. It is believed that the young prince was on the side of his uncle Jaromír, whom Oldřich had blinded and imprisoned. Oldřich died on November 9, 1034. Jaromír renounced in favor of his nephew Břetislav to succeed his brother. A year later, on November 4, 1035, Jaromír was probably murdered by members of the competing sex of the Vršovci .

Clashes with Poland and the Reich

In 1035, Břetislav fought alongside the emperor against the Liutizen , who attacked the now defunct Werben castle in the Altmark . In general, he initially tied himself closely to the empire, although he probably benefited from his wife's origins. As Bohemia stabilized under Břetislav, the crisis in Poland worsened. Břetislav took advantage of this location. In the summer of 1039 he led a raid to Poland . Most of the castles surrendered without a fight. He had Krakow and other cities plundered and conquered Gniezno at the end of July . In addition to many nobles, the campaign was accompanied by some of the church princes, including the Prague bishop Šebíř . After opening Adalbert's grave ( Vojtěch in Czech , Wojciech in Polish ), the prince had the Břetislav decrees read out, which were intended to induce the deceased to return to Bohemia voluntarily. Along with the remains of Vojtěch, he also took the remains of his stepbrother Radim-Gaudentius , the first Archbishop of Gniezno. Presumably, taking possession of the relics was the real reason for the campaign; at the same time he weakened the power of Poland through the occupation of Silesia, Gnesia and Moravia. With the help of the relics, Prague was to be upgraded from a Mainz suffragan diocese to its own Bohemian archdiocese and to succeed Gnesen. Corresponding plans were pursued with an embassy to Rome, but met with bitter resistance from the Archbishop of Mainz .

Emperor Heinrich III. followed this attitude. He also demanded the release of Poland, which, like Bohemia, was a vassal principality of the empire, and a high penalty that Břetislav was not prepared to pay. In 1039 Břetislav was able to avert a campaign by handing his son Spytihněv hostage to the emperor. In 1040, after Břetislav showed no insight, Henry III broke. then on to the campaign against Bohemia. The attack took place in August. The first part of the army was to march in with Heinrich von Cham from over Taus . The core of these troops were Bavaria and Hesse . Saxons under the leadership of Margrave Ekkehard II of Meissen were supposed to invade via northern Bohemia. Heinrich soon came across Bohemian fortifications that stalled his advance. On 22./23. August Heinrich tried in vain to overcome these fortifications and retreated to Bavaria after heavy battles for the Neumarker Pass , in which he also lost his standard bearer Werner with the entire vanguard. Otto von Schweinfurt , who was to join the Kaiser shortly afterwards with fresh soldiers, had also been involved in heavy losses on his way to Bohemia. Ekkehard had it easier in the north. He managed to bribe Prkoš , the castellan of Bilin , who was supposed to oppose him. Ekkehard got deep into the interior of the country, but then had to withdraw. Prkoš had his eyes gouged out and his hands and feet chopped off for his betrayal. He was then thrown into a river.

The campaign had resulted in losses on both sides. In the spring of 1041 Břetislav sent envoys to Heinrich. The negotiations were evidently unsuccessful, because an imperial army marched into Bohemia again in late summer, this time with more success. On September 8th the troops stood before Prague. On September 29, 1041 Břetislav surrendered and had to submit to the emperor in Regensburg in October . The conditions that Břetislav had to meet were comparatively mild: The bones of St. Adalbert were allowed to stay in Prague, Břetislav kept Silesia and Moravia, the latter even as an official fiefdom, which from this point on remained almost unchallenged in the Bohemian state association. In return, Břetislav had to pay compensation to Poland, release prisoners and place hostages. One reason for the mild treatment may have been the upheavals in Hungary, during which the pro-imperial King Peter Orseolo was expelled. Henry III. needed Bohemia as a buffer zone against Hungary.

Břetislav fulfilled his obligations as a vassal of the emperor in the following years . In the summer of 1042 he took part in a campaign by Henry against the Hungarians . However, the new Hungarian king appointed after the victory could not last long. In 1050 there seems to have been renewed conflicts with Poland, in the course of which the Polish king Casimir was able to bring back part of the land that was awarded to Bohemia in 1041. In 1044 and 1051 Břetislav was involved in further campaigns to Hungary. He helped prepare the third campaign in 1054, but no longer took part in it. While Břetislav was still alive, Heinrich tried to settle the ongoing dispute between the vassal kingdoms of Poland and Bohemia. During Pentecost in 1053, Heinrich in Quedlinburg pushed through that Breslau and other castles were returned to Poland. Poland had to pay annual taxes to Bohemia for this. The exact terms of this agreement are unknown.

In terms of domestic politics, Břetislav reorganized Bohemia and built up an administration based on the castle districts, regulated the coinage and passed numerous laws, including an order of succession, which introduced the principle of seniority . Břetislav determined his eldest son Spytihněv as his successor, the younger sons Vratislav , Konrad and Otto received partial principalities.

Břetislav died on January 10, 1055 while visiting Chrudim and was buried in St. Vitus Cathedral in Prague .

Commons : Břetislav I.  - Collection of pictures, videos and audio files