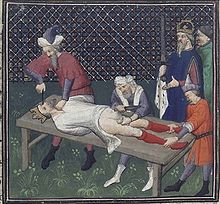 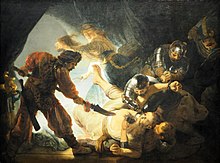 Glare is a form of punishment or torture that leads to temporary, but mostly permanent, blindness . The glare could be caused by tearing out the eyeballs or in some other way (burning out, heating, pricking, cutting, etc.).

Glare was already known in antiquity and was particularly widespread in the Orient; Roman authors in late antiquity considered it to be almost typical of the Persian Sassanid Empire . There the technique was evidently mastered to blind the condemned without linking this with his death. In this form it seems to have reached Italy and the Franconian Empire via Byzantium after AD 600 .

The dazzling of slaves is also documented early on. Shalmaneser I already reported in the 14th century BC. In his inscription from the Aššur temple in Aššur that he had brought 14,400 prisoners from Mitanni to Assur and blinded them. Such blind slaves were probably used for simple mechanical work such as grinding grain or milking. The Bible also tells of Samson : “The Philistines seized him and put out his eyes, led him down to Gaza and put him in chains; and he had to turn the mill in prison. ”( Ri 16,21  LUT ) (It is more probable, however, to operate a saddle mill stone .) The Scythians set in the 5th century BC. According to Herodotus, blinded slaves for milking and milk processing.

In the Odyssey, Homer reports on the blinding of the Cyclops Polyphemus by Odysseus and his companions.

According to legend, the early Christian martyr and Saint Lucia of Syracuse was blinded.

In the early Middle Ages in Western Europe, a method of torture existed with this name. A red-hot piece of iron was held directly in front of the delinquent's eyes. The heat radiation destroyed the retina and heated the eye fluid, which led to very painful blindness without leaving any externally visible damage.

In the Byzantine Empire , dazzling was a common measure since the 7th century to eliminate former emperors or applicants for the imperial throne. As with the Sassanids before , this practice, which was occasionally applied to popes, arose from the conflict between the factual inheritance of certain dignities and the reluctance to kill members of the ruling family. Often the nose was cut off in addition to or instead of the glare . Sometimes, however, the glare was carried out so brutally that the victim died, such as Emperor Romanus IV Diogenes . A red- hot iron was thrust into his eye socket three times, the wound became infected, and Michael Attaliates reports how maggots fell from his face before he died. Sham dazzling has also been handed down, as in the case of the Frankish mercenary Roussel Phrangopolos . Other blinded pretenders were Manuel Komnenos , Isaac II , Artabasdos , Constantine VI. , Michael V. and Alexios V.

Under the Carolingians, rebellious members of the ruling house were blinded, for example in the case of Bernhard , King of Italy, 818, and Hugos , a son of Lothar II. , 885.

The custom was also adopted in other states in the Byzantine sphere of influence, for example in Lesser Armenia , Hungary and by the Sicilian Normans .

The Byzantine Emperor Basil II achieved negative fame, who blinded around 14,000 Bulgarian prisoners in 1014 after his victory over Tsar Samuel in the Battle of Kleidion . Then he was called the "Bulgarian slayer" or "butcher" (Βασίλειος ὁ Βουλγαροκτόνος Basíleios ho Bulgaroktónos ).

Even Stephen of Hungary had a cousin blinded to prevent him from the line of succession in the 1031st The song Feschers Köbes by the Cologne dialect group Bläck Fööss addresses a glare at the time of Archbishop Anno II. Glare sentences were also imposed during the Albigensian Crusade (1209–1229) for adhering to heresy .

In the late Middle Ages and in the early modern times , glare caused by gouging out the eyes was a frequently used form of sovereign punishment, especially after the Peasants' War of 1525. For example, after the defeat of the Franconian farmers on June 9, 1525 , Margrave Casimir von Brandenburg-Kulmbach left 58 men in the City of Kitzingen , who had participated in the uprising, blinded them and drove them out of the city. Contemporaries already regarded this act as an outrage and is considered to be one of the most gruesome and bloody acts of the entire peasant war. Furthermore, blinds from the Ottoman Empire and the Mughal Empire (see Kamran Mirza or Khusrau Mirza ) are known.

After the Islamic jurisprudence ( sharia ) applicable principle of retaliation ( qisas ) Blend penalties are still imposed such. B. Acid attacks against women (see Ameneh Bahrami ). In India, children's eyes are sometimes burned out because they can earn more money as beggars.