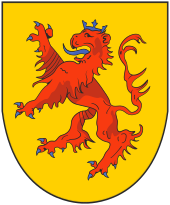 Coat of arms of the Kingdom of Lesser Armenia 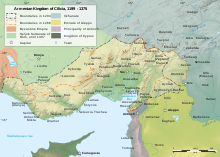 The Armenian Kingdom of Cilicia , called Armenian Kingdom of Cilicia ( Armenian Կիլիկիայի հայկական թագավորություն , Kilikiaji hajkakan tagaworutjun , mittelarmenisch Կիլիկիոյ Հայոց Թագաւորութիւն, Kilikioj Hajoz Tagaworutiun ), was a medieval state which of Armenians was established that after the Seljuk conquest of Armenia had fled. The kingdom was independent from 1080 to 1375.

It was located in the south-east of today's Turkey in the Cilicia region and represented the most south-westerly settlement area of ​​the Armenians. It should not be confused with the ancient region of the same name, Lesser Armenia ( Armenia Minor ), which stretched along the upper reaches of the Euphrates in eastern Anatolia.

Already under the Byzantine emperor Constantine Monomachus (1042-1055) Armenians were settled in Sebastia and Caesarea Cappadociae . In 1042 the Armenian Abul Gharib became the Byzantine governor of Cilicia, and Boaz suspects that since then refugees from the north have also settled here. Abul Gharib assigned a henchman, the Hethumid Oschin, to the fortresses of Lambron and Barbaron south of the Cilician Gate around 1072 . Lambron thus became the ancestral seat of the family, which from 1226 provided the kings of Cilicia. As a result of the Battle of Manzikert in 1071, Byzantium's control over the east was weakened and numerous local rulers were able to act more or less independently. In Antioch , the Armenian Vasak took control, but was killed by Byzantine soldiers in 1080. In Edessa had another Armenian, Abu Kab , usurped domination.

The founders of the Cilician Armenian state were the Rubenids , a branch of the Bagratids who ruled Armenia and Georgia at different times . From 1079 Ruben succeeded in alliance with Philaretos Brachamios , who ruled Antioch and Edessa, to expand his territory from his castle Kosidar (Kopitar) into the Cilician plain; his son Constantine I continued the conquests in a time of Byzantine weakness. The capital of Cilicia was Sis . Cilicia was a close ally of the Crusader states , who successfully played it off against the Byzantines, and saw itself as a Christian bastion in the Middle East . It was also a focus of Armenian nationalism and culture, as Armenia itself was under the rule of the Muslim Seljuks at that time. In 1130 an incursion by the Danischmenden could be repulsed with the help of Bohemond II .

1137–1138, Emperor John II succeeded in recapturing Cilicia for Byzantium. Under Thoros II , however, the Rubenids became largely independent again. By changing alliances with the Byzantines, the various Crusader states, the Turks and the Mongols, the rulers succeeded in expanding their territory further. In 1198, the Rubenid princes, who until then also called themselves "Lords of the Mountains", gained the royal dignity. For this purpose, Prince Leon II had the Roman-German Emperor Heinrich VI. homage, who had him crowned king in Tarsos by the Archbishop of Mainz Konrad von Wittelsbach at the beginning of 1198 . He used the tensions between the Roman-German and the Byzantine emperors to legitimize his empire against the claims of the latter.

After the death of King Leon in 1219, the crown of Armenia fell to his underage daughter Zabel . After the death of the regent her father had appointed, the Hethumid Constantine of Lambron took over the reign and married her to Philip of Tripoli , a son of Bohemond IV of Antioch and Tripoli . He was a Latin Catholic and did not convert to the Armenian Church , as was stipulated in the marriage contract , but plundered the empire in favor of Antioch . Constantine then had him kidnapped, imprisoned and finally poisoned and, against her will, married Zabel to his son Hethum , who was crowned king by virtue of their right.

King Hethum I allied with the Mongols against the Egyptian Mamluks and participated in the sack of Aleppo and Damascus . Lesser Armenia then became the target of Egyptian attacks. Sultan al-Ashraf Chalil succeeded in advancing deep into Cilicia in 1292. After his successor an-Nasir had finally defeated the Mongols in 1303, the Mameluks pushed further and further west and began to seriously threaten the existence of the state.

When King Leon V died without descendants, the crown fell to Guido of Lusignan (alias Constantine IV ), the eldest son of Zabel , the sister of Hethum II , and her husband Amalrich of Tire . As a Latin Catholic, however, he was extremely unpopular and was murdered by the barons in 1344. Peter I of Cyprus conquered some coastal cities in 1360 and then called himself King of Armenia. He was murdered on January 16, 1369 and the title was lost again under his son Peter II .

The Mamluks conquered the capital Sis in 1375. The last ruling king of Lesser Armenia, Leon VI. , was captured. He was released on payment of a ransom and finally died in Paris in 1393 (grave in Saint-Denis ). His uncle James I , King of Cyprus inherited his titular claims .

When the line of the Lusignans expired with the death of Jacob II of Cyprus in 1473, the titular claim to the crown of Cilicia fell to the Republic of Venice via his widow Katharina Cornaro . The House of Savoy also claimed this title through Ludwig of Savoy , the husband of Carlotta von Lusignan , the legitimate daughter of Jacob I. At that time, however, Cilicia was already firmly in the hands of the Muslims. In 1515 the former area of ​​Lesser Armenia became part of the Ottoman Empire .