The Principality of Antioch and the Other Crusader States , 1135

The Principality of Antioch or Antioch in Syria and parts of modern-day Turkey was one of the Crusader states that arose during the First Crusade . The principality existed from 1098 to 1268 . 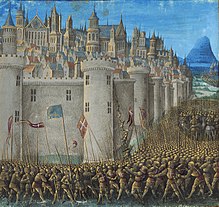 Siege of Antioch , detail of a miniature by Jean Colombe (around 1430–1493) from Sébastien Mamerot : Les Passages d'Outremer from 1474

After the arduous crossing of Asia Minor , the main army of the First Crusade reached the city ​​of Antioch, which had been in Seljuk hands since 1085 . Bohemond of Taranto commanded the siege of the city, which began in October 1097. With more than 400 towers, the city was almost impregnable. The siege lasted through the winter, famine broke out among the crusaders , who were often forced to eat their own horses.

The city fell into the hands of the crusaders through treason: Bohemond managed to persuade a guard in one of the towers, a former Christian named Firuz, to let him and some companions into the city via a leather ladder. They stormed the city on June 3, 1098, the storm was followed by a massacre of the Muslim population, and only four days later the next siege: a united Muslim army arrived and in turn surrounded the Christians in the city. The Muslim army was led by Kerboga from Mosul and also consisted of allied troops of the Duqaq from Damascus , the Ridwan from Aleppo , and troops from Persia and Ortoqid from Mesopotamia . Alexios I Komnenus , the Byzantine emperor who was on his way to aid the Crusaders, turned when he received news that the city had been lost again.

However, the crusaders withstood the siege with the help of the mystic Peter Bartholomäus . Peter claimed to have had visions from the apostle Andrew , who informed him that the Holy Lance that Jesus pierced on the cross was in Antioch - in St. Peter's Church the dug was carried out and the lance was found by Peter himself. Although Peter most likely deposited them there himself (the leaders of the crusade were themselves very skeptical), the find boosted the troops' morale considerably. At the same time, disagreements broke out among the leaders of the Muslim army. With the newly discovered relic at the top, the crusaders stood in front of the city to fight on June 28, 1098. Kerboga found himself facing a troop that was surprisingly motivated and united, while his army was divided into factions. After a short struggle, the Muslims fled to their respective homeland.

After the victory, there was a long discussion about who should rule the city. Bohemond and the other Italian Normans prevailed. While the rest of the crusade army moved on towards Jerusalem in January 1099, Bohemond stayed in Antioch and assumed the title of prince. Unlike Baldwin in Edessa, who was already a count in France , Bohemond did not have a corresponding title of nobility, which, however, did not prevent the establishment of the principality. In 1100 Antioch also became the seat of the newly founded Latin Archdiocese of Antioch.

Bohemond was captured in a battle against the Danischmenden in 1100 , after which his nephew Tankred was appointed regent of Antioch. Tankred expanded the territory of the principality by taking the cities of Tarsus and Latakia from the Byzantine Empire . Bohemond was released in 1103 and traveled to Italy in 1105, leaving Tankred again as regent to recruit fresh troops with which he attacked the Byzantines from the west in 1107. He was defeated at Dyrrhachium in 1108 and forced by Alexios I to sign the Treaty of Devol , which was to make Antioch a Byzantine vassal state after Bohemond's death - Bohemond had already promised during his stay in Constantinople in 1097 that all the land he had conquered would be returned to the emperor. After his return to Antioch, he fought with Baldwin and Joscelin von Courtenay from the county of Edessa against Aleppo , where Baldwin and Joscelin were captured, whereupon Tankred also became regent here. Bohemond returned to Italy again, where he died in 1111.

Alexios now asked Tankred to return the principality to Byzantium, but Tankred, who was the only leader of the crusade who had not taken the oath in Byzantium in 1097 (the others had sworn but did not keep it), refused with backing from Tripoli and Jerusalem . Tankred died in 1112, followed by Bohemond II under the reign of Tankred's nephew Roger of Salerno , who repulsed an attack by the Seljuks in 1113.

On June 27, 1119, Roger was killed in the Battle of Ager Sanguinis . Antioch now became a vassal state of Jerusalem with Baldwin II as regent until 1126 (although Baldwin was long captive in Aleppo during this time). Bohemond II ruled himself for only four years and left the principality to his young daughter Konstanze in 1131 ; Baldwin II took over the reign again, but died a short time later, and passed the rule on to Fulko . In 1136, at the age of ten, Konstanze married 36-year-old Raimund von Poitiers .

Like his predecessors, Raimund attacked the Byzantine province of Cilicia . This time, however, the emperor, John II Comnenus , struck back. He appeared before Antioch in 1138 and forced Raimund to take the oath of allegiance, but was then forced to retreat by an uprising instigated by Joscelin II of Edessa . Johannes continued to plan to conquer all crusader states, but died on April 8, 1143 in the Taurus Mountains .

After the fall of Edessa in 1144, Antioch was attacked by Nur ad-Din during the Second Crusade . The east of the principality was largely lost, Raimund was killed in the battle of Inab in 1149. Balduin III. von Jerusalem was now regent for Raimund's widow Konstanze until 1153, when she married Rainald von Chatillon . Rainald also immediately began a war with Byzantium , invading and looting Cyprus , while the Templars and Armenians attacked the Byzantine possessions in Cilicia . In 1158 he made peace with Manuel I Komnenus , who came to Antioch the following year to personally take control of the principality.

Rainald was captured on a raid into the Anti-Taurus in 1160 by Maj-ed-Din , governor of Aleppo and follower of Nur ad-Din of Damascus . The reign went to the Latin patriarch of Antioch , Aimeric of Limoges (1139– 1193), an old opponent of Rainald. Rainald was not released until 1176 and never returned to the city. In the meantime, Manuel Komnenos married Konstanzes daughter Maria , but since Konstanze was only nominally ruler of Antioch, she was removed in 1163 by her son Bohemond III. who in turn was captured by Nur ad-Din the following year. The Orontes was now designated as the border river between Antioch and Aleppo. Bohemond III. returned in 1165, married one of Manuel's nieces and was arranged to install a Greek Orthodox patriarch in the city as well .

With the help of the fleets of Italian city-states , Antioch survived Saladin's attack on the Kingdom of Jerusalem in 1187. Neither Antioch nor Tripoli participated in the Third Crusade , although the remains of Frederick Barbarossa's army stopped briefly in Antioch in 1190 to bury the emperor. Bohemond's second son Bohemond became Count of Tripoli after the battle of Hattin , Bohemond's eldest son Raimund married Alice, a princess from the Kingdom of Lesser Armenia , in 1194 and died in 1200, Bohemond III. even the following year.

His death led to a battle for supremacy between his son Bohemond IV and the son of his eldest son Raimund , Raimund Ruben . Bohemond IV usurped the government in 1207, Raimund ruled briefly from 1216 to 1219. Bohemund IV died in 1233. Antioch, now ruled by his son Bohemond V and united in personal union with the county of Tripoli, no longer played a role in the Fifth Crusade , likewise little in the attempts of Frederick II ( Frederick II's crusade ) and Louis IX. ( Sixth and Seventh Crusades ) to retake Jerusalem.

In 1254 Bohemond VI married . Sibylla (Sabel), an Armenian princess, which ended the power struggle between the two states. At that time the Armenians were more powerful and Antioch was only a vassal state. Both were swept away in the conflict between the Mamluks and the Mongols ; When the Mongols were defeated in the Battle of ʿAin Jālūt in 1260 , Sultan Baibars began to threaten Antioch, which - as an Armenian vassal - had supported the Mongols. Baibars conquered the city after four days of siege on May 18, 1268, and all of northern Syria was quickly lost afterwards. Acre was conquered 23 years later and the Crusader states ceased to exist.

The principality of Antioch, even in its greatest extent, was much smaller than Edessa and Jerusalem. It stretched around the northeast corner of the Mediterranean , bordered by the county of Tripoli in the south, Edessa in the east and the Byzantine Empire or the Kingdom of Lesser Armenia in the northwest. In the 12th century it had about 20,000 inhabitants, mostly Armenians, Greek Orthodox Christians and a few Muslims outside the city. Apart from the Crusaders themselves, there were few Catholic Christians, even when the city was given Latin patriarchy in 1100.

In addition to the domains of the Prince of Antioch, the country was divided into numerous feudal lords who were vassals of the Prince. The most important were:

Coat of arms of the principality

For the genealogy of the princes of Antioch see Hauteville (noble family) and Poitou .

Family tree of the princes of Antioch