Tankred of Tiberias , also Tankred of Taranto or Tankred of the Crusaders (* 1072 , † December 12, 1112 ), was one of the subordinates of the Italian Normans of the First Crusade . After the First Crusade, he was prince of Galilee , why he after the capital of Galilee, Tiberias , henceforth Tancred was called. In the following years he was also regent of the Principality of Antioch and briefly also regent of the county of Edessa .

Tankred came from the mother's side of the Norman noble family Hauteville . He was one of two sons of Emma , a daughter of Robert Guiskard . His father was Eudes Bon-Marchais (Odo "the good margrave").

Tankred on the First Crusade

Refusal to take the oath

Tankred was a nephew of Bohemond of Taranto , his mother's older brother, after whom he is also called Tankred of Taranto. In 1096 he accompanied his uncle on the crusade, during which he was forced in Constantinople to take the oath of allegiance to the Byzantine emperor Alexios I , in which he undertook to cede to the empire all the conquered land that had once belonged to Byzantium. Tankred consistently refused to take this oath of allegiance, which the basileus required as a condition for having the crusaders cross the Bosphorus . In order to escape the vassal oath , Tankred crossed secretly and joined the besieging Nicaea troops.

Siege of Nicaea and vassal oath

He took part in the siege of Nicaea in 1097. After the crusaders had routed a relief army and completely cordoned off the city, the capital of the Rum Seljuks surrendered to an infiltrated Byzantine negotiator. The troops of the Seljuks were allowed to withdraw for a ransom, the family of the Sultan of the Rum Seljuks, Kilij Arslan I , located in Nicaea , was even allowed to withdraw without paying a ransom . In the victory celebration after the siege, the Byzantine emperor invited the princes of the crusaders into his tent and gave them rich presents to compensate them for the pillage they had missed. There he again demanded the vassal oath of those who had not yet sworn him. Tankred persistently refused to do this, as he said he owed loyalty only to his uncle. Finally, he offered to give his consent, on the condition that he would be paid the amount in gold that could fill the entire tent, as well as the entire amount of gold that the other princes had already received. The brother-in-law of the Byzantine emperor then expelled him from the tent, which is why Tankred assaulted him. Only through the intervention of his uncle Bohemond and the Byzantine emperor himself could an escalation of the dispute be prevented. Tankred then apologized and now swore the oath without contradiction.

He stayed with his uncle in the main army until Heraclea , where he and Baldwin von Boulogne withdrew from the main army in order to march on to Cilicia . It is certain that he intended to acquire independent rule in the area, and Baldwin arguably had the same aim. He conquered Tarsus in September 1097 , but left the city to Baldwin, who by chance came across a pirate fleet from Boulogne and left them behind as a garrison. Tankred and Baldwin turned shortly after Mamistra , but the two could not force an open war, and finally marched on Antioch . In Marasch they met the main army again, which Tankred rejoined, while Baldwin moved on via Turbessel to Edessa , where he established his own rule with the county of Edessa .

During the siege of Antioch from 1097 to 1098, he assumed command of the built to control the southwest side of the city by the Crusaders Castle , which in his honor Tancred tower was called. After the conquest of Antioch by the crusaders, Bohemond established himself a principality there, breaking the vassal's oath given to his emperor Alexios, which aroused the displeasure of the Provencal crusader prince Raymond of St. Gilles . Bohemond then left the crusade army in the dispute and stayed behind in Antioch and concentrated on the expansion of his new territory, while Raimund took over the de facto leadership of the crusade, which he had previously shared with Bohemond. Tankred also fell out with Raimund in the spring of 1099 and continued the crusade in the wake of Gottfried von Bouillon .

After Raimund von St. Gilles unsuccessfully canceled the siege of the Muslim fortress of Arqa , from which he wanted to limit Bohemond's expansion, to a large part of the crusade army , the crusade army finally continued on its way to Jerusalem in mid-1099 . Tankred and his men formed part of the vanguard that occupied Bethlehem on June 6, 1099 , where Tankred planted his banner on the Church of the Nativity.

The next day the siege of Jerusalem began . Tankred already excelled in the first attempts at storm - he was the only crusader who had been able to find enough wood for a scaling ladder. After more than five weeks of siege, Tankred took part in the victorious assault on Jerusalem on July 15, 1099. After Duke Gottfried von Bouillon and his men had overcome the city wall in the north by means of a siege tower, he and Gaston IV von Béarn were able to penetrate through a now undefended, six-day-old breach . He had learned from two prisoners that there were immeasurable treasures in the Dome of the Rock , which is why he and his men fought through there and then locked themselves in it for 24 hours. During this time the building was thoroughly looted, even the precious metal on the walls was torn down. The next day he is said to have left the Dome of the Rock with immeasurable wealth. He placed the Muslims who had fled to the mosque under his protection, but could not prevent them from being massacred by his fellow Crusaders.

Shortly after the fall of Jerusalem he conquered together with Eustach III. of Boulogne Nablus , before rejoining the main army for the victorious battle of Askalon on August 12, 1099.

Tankred after the crusade

In the following months Tankred conquered the cities of Tiberias , Haifa and Bethsan and established the Principality of Galilee there, which he received as a fiefdom from the first regent of the newly founded Kingdom of Jerusalem , Godfrey of Bouillon . Gottfried's successor was Baldwin of Boulogne in 1100, who was crowned king as Baldwin I of Jerusalem and from then on tried to limit Tankred's power.

After his uncle Bohemond was taken prisoner in August 1100 , Tankred took over the reign of his principality in Antioch for him. Under pressure from King Baldwin I, Tankred had to renounce the Principality of Galilee, which Baldwin gave to his Seneschal Hugo von St. Omer , in 1101 in favor of the reign in Antioch .

As regent of Antioch, Tankred expanded the dominion of the principality by conquering Byzantine areas such as the cities of Tarsus and Latakia , while Emperor Alexios I tried in vain over the next ten years to bring Antioch under his control. Bohemond returned from captivity in 1103 and again took over the government himself, but left it again to Tankred in 1105 when he traveled back to Italy to organize a campaign against Byzantium in his principality of Taranto .

After Bohemond's campaign against Byzantium in 1108 failed not far from the Devoll river in what is now Albania , Tankred refused to recognize the Devol treaty , in which Bohemond Alexios I swore the feudal oath again. Tankred's refusal kept Antioch independent from Byzantium for several more decades.

In 1104 Tankred took over the reign of the county of Edessa after the local Count Baldwin II had been captured by Dscherkermisch at the Battle of Harran . Tankred and Bohemond did not try to raise the ransom for Baldwin, and when Baldwin was released at the end of 1108, he had to force Tankred at the beginning of 1109 to give him control of Edessa again and to withdraw to Antioch. In 1105 Tankred triumphed over Radwan of Aleppo at the Battle of Artah and recaptured a large part of the territories lost as a result of the Battle of Harran.

Tankred also undertook campaigns of conquest against the then Muslim area that later formed the county of Tripoli . He again competed with the Provencal crusaders under Raimund von St. Gilles and his descendants, who tried to counterbalance the Normans in the Principality of Antioch. Through the mediation and promotion of King Baldwin I of Jerusalem, the Provencals were able to found a county around Tripoli . To compensate, Tankred managed to get Baldwin to give him the fief over the Principality of Galilee again after Gervaise von Bazoches , the successor of Hugo von St. Omer, had died in May 1108 . Tankred also brought under his control the Krak des Chevaliers in 1110 , which later became an important fortress in the County of Tripoli.

After Bohemond's death in 1111, Tankred remained regent of Antioch, now as the guardian of Bohemond's still underage son, Bohemond II.

In December 1112 Tankred died of typhus . He had been married to Cecilia of France, a daughter of King Philip I of France , since 1106 , but had no children. Shortly afterwards, his widow married Count Pons of Tripoli , a grandson of Raimund of St. Gilles, which ultimately led to the reconciliation between the Norman and Provencal sides. 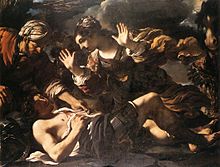 As Tancredi, Tankred is the hero in Torquato Tasso's epic work La Gerusalemme Liberata (“The Liberated Jerusalem”) from 1574. In it, he falls in love as a Christian knight with the Muslim warrior Clorinda , whom he unwittingly fatally wounded during a fight at night . But before she dies, she accepts the Christian faith. The princess of Antioch, Erminia , also falls in love with him. However, when she learns of his love for Clorinda , she steals her armor and returns to Antioch.