Tripoli County and the Other Crusader States, 1135

Coat of arms of the county of Tripoli 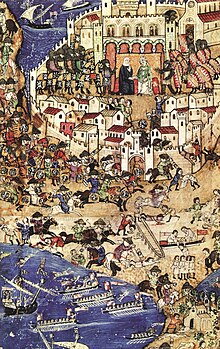 The county of Tripoli extended to what is now Lebanon and northern Syria and was the last of the four crusader states established in the Middle East as part of the First Crusade .

The county's beginnings date back to 1102, when Count Raymond of Toulouse , one of the leaders of the First Crusade, began a protracted war with the Banu Ammar , the emirs of Tripoli , who were theoretically vassals of the Fatimids in Egypt , gradually over their territory occupied and finally besieged them in the city itself. In 1103, Raimund built the mighty castle on Mons Peregrinus as the main base to control the land around Tripoli.

Raimund died on February 28, 1105, leaving his young son Alfons-Jordan as heir under the reign of Wilhelm-Jordan von Cerdagne . Wilhelm-Jordan continued the siege of the city for another four years until an illegitimate son of Raimund, Bertrand , whom he had left behind as regent in Toulouse , came to the east and left Toulouse to Alfons-Jordan and his mother, who then returned to France . Bertrand and Wilhelm-Jordan reached an agreement through the mediation of King Baldwin I of Jerusalem , according to which everyone should rule the area that he had conquered himself, an agreement in which Bertrand conquered the city the following year (12 July 1109) got the better end. When Wilhelm-Jordan died a few months later, Bertrand became sole ruler.

After Raimund's death, the county of Tripoli was transferred to Bertrand as a crown fiefdom of the Kingdom of Jerusalem , and then existed as a vassal state, from 1142 with an autonomous castle within the national borders, the Krak des Chevaliers , which had been given to the Order of St. John . Count Raimund III. , who ruled Tripoli from 1152 to 1187, played an important role in the neighboring kingdom to the south, on the one hand because of his family ties (his mother Hodierna was a daughter of Baldwin II ), on the other hand because of his own title as Prince of Galilee , which he passed his wife wore. He was regent twice in the kingdom, first for the young Baldwin IV from 1174 to 1177, then for Baldwin V from 1185 to 1186, as well as the leader of the aristocratic opposition to the connections of Baldwin IV to the Courtenay , the Knights Templar, Guido von Lusignan and Rainald of Chatillon . Raimund sought unsuccessfully to keep peace with Saladin , and ironically, it was Saladin's siege of Tiberias , where his wife was staying, that led the Crusader army to Galilee before the defeat at Hattin in 1187. Raimund survived the battle but died a short time later.

Thanks to a timely arrival of a fleet of crusaders and an army from Sicily, the county was able to avoid Saladin's conquest through a series of victories after Hattin. After Raimund's death, he was followed by the sons of the Prince of Antioch , Bohemond III. From the death of Bohemond III. In 1201 the county - with the exception of the years 1216 to 1219 - was ruled in personal union with Antioch. This lasted until Antioch was conquered by the Mamelukes in 1268 .

In May 1271, Tripoli was also besieged by the Mameluks. The army of Prince Edward's crusade , which had just arrived in Acre , was able to relieve the city and stabilize the county of Tripoli for the time being.

The death of the unpopular Count Bohemond IV in 1287 led to a dispute between his heiress, his sister Lucia and the city, which placed itself under the protection of the Republic of Genoa . However, Lucia managed to reach an agreement with Genoa and the city, which now again displeased Venice and the ambitious Bartolomeo Embriaco , the city's Genoese mayor, who now called the Mameluke Sultan Qalawun to help. Qalawun captured the city in 1289 after a siege and put an end to Tripoli county.

Even after the fall of the city, the title of Count of Tripoli was awarded. The Frankish - Cypriot family de Nores held the title still 1544. At that time the Titulargraf of Tripoli was the fourth most important nobles in the Venetian dominated Kingdom of Cyprus. Only the titular count of Jaffa , the count of Karpas , both Venetian nobles, and the Greek Jakobus Syngriticus as count of Rocca were higher in rank .

The population of Tripoli was mainly recruited from immigrants from southern France and Italy, and so Occitan was predominant in the county , while French was predominantly spoken in the other three crusader states .

Feudal lords in the county of Tripoli

In addition to the domains of the Count of Tripoli, which made up about half of the county, there were also numerous feudal lords.