Tripoli , also Tripoli , ( Arabic طرابلس, DMG Ṭarābulus orطرابلس الشام, DMG Ṭarābulus aš-Šām , Lebanese-Arabic Trāblus ) is the second largest city and the second largest port of Lebanon , as well as the capital of the Governorate of Northern Lebanon . Tripoli is located 85 km north of Beirut on the Mediterranean coast . The population of the metropolitan region is around 500,000, with 195,932 residents in the center (2010 calculation). The vast majority of the population are Sunni Muslims . Alawites make up the largest minority in Tripoli at 50,000.

Tripoli is located on a headland that protrudes far into the Mediterranean and is therefore ideal for settlement. Traces from the 15th century BC were found. In the 9th century BC The Phoenicians founded a trading post on the site. Traders from Sidon , Arados (today's island of Arwad in Syria) and Tyros settled down. However, the different population groups remained to themselves. The result was three districts, from which the name Tripoli (Greek for "three cities") is derived.

The city fell around 539 BC. BC with the other Phoenician city-states under Persian rule. 333/332 BC Alexander the Great conquered the Levant . As a result of the Diadoch fights following his death , Tripoli became part of the Seleucid Empire , in which it enjoyed autonomy . 64 BC In BC Phenicia was conquered together with Syria by Pompey for the Roman Empire . The Arabs followed in 636 and the Seljuks in 1071 .

In the Middle Ages , after it was conquered by the Fatimids in the Battle of Tripoli (in ancient geography, Tripoli is called 'Tripoli'), from 1109 to 1289 the city was the capital of the county of Tripoli named after it , the last founded and smallest Crusader state . The Crusaders also called the city Triple . From March 26, 1289, the city was besieged by the Mamluks under Sultan Qalawun and finally conquered and sacked on April 26, 1289. Thousands of men were massacred, women and children enslaved. The crusader fortress of Mons Peregrinus further inland was also destroyed. In 1367 Tripoli was twice the Cypriots under King Peter I . looted. In 1516 Sultan Selim I conquered the city and incorporated it into the Ottoman Empire .

Marktgasse in the old town

After the First World War , Tripoli was placed under French mandate rule in 1920 and incorporated into the newly founded state “ Greater Lebanon ”.

Tripoli has a large souq in the Mamluk old town. Some aisles are narrower and more convoluted than in the souks of Aleppo or Damascus . In the souq there are numerous khans , hostels and warehouses for traders.

The Khan as-Sabun (Khan of the soap boiler) originated in the 17th century. First it served as a military barrack for Ottoman troops. It then stood empty for a while before it was converted into a soap factory. The Khan as-Sabun is still used today as a sales and storage room for flavored, handmade olive soap.

The Khan al-Hayyatin (Khan the Tailor) dates from the 14th century. The khan is about 80 meters long. The half-open roof construction, which consists of stone arches over which wooden planks lie, is striking. The sales rooms on the ground floor have only one opening to the inner courtyard. The rooms on the first floor can be entered via two galleries from the outside of the tailor's suq. Textiles are still traded in the sales rooms today. 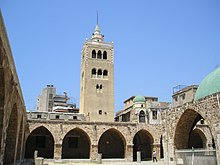 Minaret of the Great Mosque

To the south of the market is the great mosque. This was probably built between 1294 and 1314 by the Muslims from the remains of the Marienkirche from the time of the Crusaders. The minaret probably dates back to Christian times - it has at least Italian architectural features. The same applies to the entrance area: the dominant round arches were also used in the architecture of the Crusaders. The prayer room and the inner courtyard with a fountain are designed in a Muslim style. The great mosque is the first building in Tripoli that was built by the Mamluks .

To the south of Tripoli is the Taynal Mosque, a former Carmelite church. A Phoenician temple presumably stood in the same place before. The mosque is named after the sponsor and builder Emir Taylani. The building was converted into today's mosque in Mamluk times in 1336. The mosque is made of sandstone. The four domes of different sizes are striking. The interior is divided into two parts. Access from one area to the other is through a portal located in the mosque. Since it was protected over the centuries, it is still very well preserved. The prayer pulpit, which also dates from 1336, is also well preserved. Only the splendid marble floor has suffered in the meantime because the mosque temporarily served as a Palestinian refugee camp.

The port of al-Mina is located on a rocky headland that protrudes far into the Mediterranean Sea. The Lion Tower (Bourj Al-Siba'a) is located here. It was built in 1441 to defend the port. Its walls are 3 m thick. The marble gate used to be flanked by lions - hence the name. Another historical building is the Khan Al-Tamasili, an Ottoman style rest house.