The title of this article is ambiguous. Further meanings are listed under Sidon (disambiguation) .

Sidon ( Phoenician : ṣdn, Arabic صيدا Saidā , DMG Ṣaydā ) is the fourth largest city in Lebanon . It is the capital of the South Lebanon Governorate and the Sidon District. It is located on the Mediterranean Sea north of Tire south of the capital Beirut . The name means something like fishing town .

In ancient times , Sidon was one of the most important cities in Phenicia .

During the rebellion of the Phoenician cities against Shalmaneser V (726–722 BC) Sidon sided with the Assyrians. Sidon, however, rebelled against Sennacherib , who put down the 701 Rebellion. King Luli fled to Cyprus , where he died, and Sennacherib installed Ethba'al as his successor. Sidon was destroyed by the Assyrians around 677 after the Ebed-Milkat rebellion and the inhabitants were deported. Abdi-Milkutti of Sidon was beheaded on the orders of Assurhaddon, his head was hung around the neck of a Sidon dignitary who had to march around with it on the market square of Nineveh , accompanied by singers and harp players. Sidon became part of an Assyrian province and partially populated with deportees. The southern part of the territory of Sidon fell to Tire . Assurhaddon built a new city, Kur- Assurhaddon , not far from the destroyed Sidon . The kings of Arwad , Byblos and Tire had to take part in the construction.

After the end of the Assyrian Empire, the area was briefly conquered by the Egyptians, Pharaoh Necho II left a stele in Sidon. The city ​​of Sidon was rebuilt under Nebuchadnezzar II .

The decline of Tire after 572 caused the rise of Sidon. In the ration lists from the time of Nebuchadnezzar (10th - 35th years), artisans and nobles from Tire, Byblos and Arwad appear, but none from Sidon. The city had apparently been spared deportations. The city became the most important trading center of the Achaemenids on the Mediterranean.

In 1855 the sarcophagus of King Ešmun-ezer II was discovered. According to a Phoenician inscription, he is apparently one of the "kings of Sidon" (possibly from the 5th century BC ); his mother was a priestess of Astarte , the "goddess of Sidon". In this inscription the gods Ešmun and Baʿal are named as the main deities of Sidon. Astarte is called Aštart-šem-Baʿal (" Astarte is the name of God "), a title that also appears in a Ugaritic text.

Sidon maintained in the 4th century BC BC “under King Straton I (approx. 370-358) active relations with Athens . King Tennes (approx. 354-350) had a revolt against Artaxerxes III. atone for the uprising against the Persians. Tire and Arados had promised the Sidonians help for the uprising against the Persians, but then waited for the outrage to end and, after Sidon's fall, assumed dominance in the region. So the Sidonians welcomed in 332 BC . BC Alexander the Great : "The Sidonians rushed to surrender to the winner of the hated Persians power; At her honorable invitation, Alexander took possession of the city, restoring its former territory and constitution to it by transferring rule to Abdalonymus , a descendant of the Sidonian kings living in poverty. ”During the siege of Tire, Sidon Alexander served as Collection point for the Phoenician ship contingents and the allied Cypriot fleet, which separated from the Persian fleet after the battle of Issus .

The city ​​was expanded by the Romans under Emperor Vespasian and provided with a city wall and then modern infrastructure (public fountains, etc.). The Eastern Roman period lasted until the battle of Jarmuk in 636 AD. After that, Sidon was conquered by the Arabs as a result of the Islamic expansion . 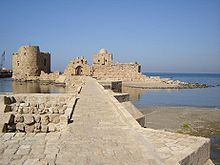 On December 4, 1110 Sidon was the Crusader King Baldwin I of Jerusalem conquered by the crusade Sigurd of Norway had been reinforced. Sidon then became a county in the Kingdom of Jerusalem ; the crusader Eustach I. Garnier became their first count. Remains of the city walls from the 12th century can still be seen today. During the Crusades this was the seat of the Latin diocese of Sidon, which was founded in 1133.

1187 the city of troops was Ayyubid - Sultan Saladin occupied in 1197 by the German Crusade recaptured. During the sixth crusade under Louis IX. the saint , Sidon was again taken by the Ayyubids in autumn 1249, but returned to the Christians in May 1250. In April 1253 an-Nasir Yusuf attacked the poorly fortified city and killed almost 2,000 residents. Louis IX then had the city fortifications rebuilt, including the citadel on the southern edge of the old town. As the last Count of Sidon, Julian Garnier transferred the city to the Knights Templar in 1260 . In the same year it was sacked by the Mongols under Kitbukha . When, after the fall of Accons, the Mamluks army appeared before Sidon, the gates were opened for him without a fight. Shortly after the handover, there was an uprising of the Frankish knights, who are now entrenched in the sea fortress at the harbor, north of the old town. After she had to surrender on July 14, 1291, the city was completely destroyed.

In 1900 the city had 10,000 inhabitants, in 2000 the population had grown to 200,000. In 1948 Palestinians fled their homes or were expelled . Some settled in the Palestinian refugee camps Ain al-Halweh and Mieh Mieh . Today around 70,000 refugees live there, whose ancestors came from the northern Palestinian cities of Amqa, Saffourieh, Shaab, Taitaba, Manshieh, Al-Simireh, Al-Nahr, Al-Sofsaf, Hitten, Ras al-Ahmar, Al-Tiereh and Tarshiha in 1948. With the emigration of Jews from Sidon at the beginning of the Lebanese civil war , the synagogue in the old town , one of the oldest in the world, was also given up and fell into disrepair. In 1982 Israel intervened in the civil war with Operation Peace For Galilee and also captured Sidon. The city was badly damaged.

Sidon in the Bible

Sanchuniathon created the goddess Sidon , the daughter of Nereus .

Europe was kidnapped from Sidon to Crete by Zeus in bull form.