Johann Gustav Bernhard Droysen (born July 6, 1808 in Treptow an der Rega , † June 19, 1884 in Berlin ) was an important German historian and history theorist. In 1848/1849 he sat in the Frankfurt National Assembly and was a member of the important constitutional committee .

After attending grammar school in Stettin , Droysen devoted himself to studying philosophy and philology in Berlin, where he heard from among others Georg Wilhelm Friedrich Hegel , August Boeckh and Karl Lachmann . Then he was first tutor of Felix Mendelssohn Bartholdy from 1827 to 1829 , then from 1829 teacher at the Berlinisches Gymnasium zum Grauen Kloster in Berlin. From 1833 he was a private lecturer, from 1835 associate professor at the Friedrich-Wilhelms-Universität Berlin , from 1840 professor at the University of Kiel , where his (unfinished) history of Hellenism originated, then in Jena (from 1851) and again at the university Berlin (since 1859).

Droysen got involved in politics even before the Schleswig-Holstein survey in 1848: in 1846 he took part in the so-called Germanist Days . In 1848 he was a representative of the Provisional Government in Kiel at the Bundestag in Frankfurt , then from May a member of the National Assembly , in which he joined the right-wing center (" Casino "). He never gave a speech in parliament, but behind the scenes he was one of the most influential right-wing liberal politicians.

His resolute advocacy of the separation of Schleswig and Holstein from the Danish crown led to tension with the government in Copenhagen . Droysen therefore applied for the chair of history at the University of Jena, which had to be filled due to Heinrich Luden's health . The corresponding negotiations failed in 1846, and Adolf Schaumann was given the chair . Another application in 1851 - Adolf Schaumann had been appointed archivist, senior librarian and historiographer of the royal house - was successful, while the eight other revolutionary professors at Kiel University were dismissed from their posts after the failure of the Schleswig-Holstein uprising in 1852.

Droysen is buried in the Old Twelve Apostles Cemetery . The grave was dedicated to the city of Berlin from 1958 to 2015 as an honorary grave .

Droysen placed himself in the forefront of historians of his time with his first work, The History of Alexander the Great in 1833. With his groundbreaking history of Hellenism , he then elevated the term " Hellenism " to the epoch designation for the time between Alexander and Cleopatra . Droysen was one of the first historians to advocate not seeing the three centuries after Alexander as a decay; In his eyes, developments were taking place at that time without which Christianity would not have been possible.

Later Droysen mainly worked in the field of modern history. His history of Prussian politics (1855–1886) is the most comprehensive representation of the Prussian-Little German idea of ​​history. Droysen did not belong directly to Heinrich von Sybels and Heinrich von Treitschke's school , but understood the task of historical studies in a related sense. Droysen resolutely rejected Leopold von Ranke's demand for objectivity in historiography : for him, history rather had an educational function for the state.

Droysen was a member of several academies. So he belonged to the Royal Saxon Society of Sciences in Leipzig and the Prussian Academy of Sciences .

As a history theorist, Droysen laid the foundation for the hermeneutic methodology in modern history. The source-critical method, which had a far-reaching influence on historiography , goes back to Droysen and Barthold Georg Niebuhr . Friedrich Meinecke is one of Droysen's most important students . His son Gustav Droysen was also a history professor and presented important research on the history of the Thirty Years' War .

Droysen's parents were Johann Christoph Droysen (1773-1816), Lutheran military pastor, and Anna Dorothee Friederike Casten († 1827), daughter of an ironmonger. He grew up with three sisters and a brother in Greifenhagen near Stettin. 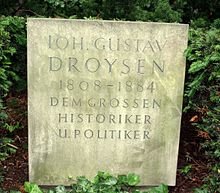 Droysen's grave in the Twelve Apostles Cemetery in Berlin

JG Droysen's first marriage (1836) was married to Marie Mendheim (1820–1847). She is the daughter of Samuel Ferdinand Mendheim (1786–1860), bookseller and music publisher in Berlin, and Marianne Friedländer (1797–1826). After the death of her mother, she grew up with her grandparents Rebecca and Benoni Friedländer .

The children come from this marriage

In his second marriage (1849) JG Droysen was married to Emma Michaelis (1829-1881). She was the daughter of the Kiel gynecologist Gustav Adolf Michaelis and a friend of his first wife Marie. From this marriage comes

A directory of the writings, autographs and portraits of Johann Gustav Droysen as well as a selection of literature on the person is available from:
Horst W. Blanke (Ed.): Droysen Bibliography (= Historik. Historisch-Kritische Ausgabe. Supplement). Frommann-Holzboog, Stuttgart 2008, ISBN 978-3-7728-2379-4 .