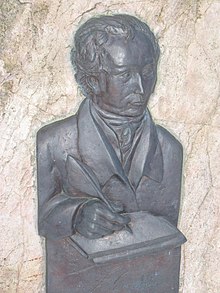 Heinrich Luden comes from a rural background. He was born as the youngest child of the farmer Claus Luden (* 1728 in Loxstedt; † May 3, 1780 ibid.) And his cousin Catrine Luden (* 1734; † December 21, 1811 in Loxstedt). On April 12 of the same year he was baptized in the name of Hinrich, with his maternal grandfather Claus Luden from Nesse , his later stepfather Hinrich Schmidt (* 1741; † September 2, 1815 in Loxstedt), a Berend Hüllen and an Agnete Kammann as Godparents acted. From 1796 he attended the cathedral school in Bremen and in 1799 initially studied theology at the University of Göttingen . Encouraged by the historian August Ludwig von Schlözer and later Johannes von Müller , he turned to historical studies. After a position as private tutor in Bremen (1802), he went to Berlin in 1804 as private tutor with the State Councilor Christoph Wilhelm Hufeland . In 1805 he received his doctorate in Jena on Christian Thomasius . He also wrote biographies on Hugo Grotius (1806) and Sir William Temple (1808).

In 1806 he was appointed associate professor of history at the Friedrich Schiller University in Jena, and in 1808 he was appointed honorary professor and in 1810 full professor of history. Luden also took part in the organizational tasks of the Salana and was rector of the Alma Mater in the summer semester of 1822 and in the winter semester of 1829 . From 1823 he was a member of the state parliament of Saxony-Weimar-Eisenach for the state of the estate owners in the Weimar-Jena district. He was appointed Hofrat of Saxe-Weimar and the Privy Councilor of Saxe-Gotha and received the Knight's Cross and the Commander's Cross of the White Falcon Order . He turned to German history in order to promote the development of German national consciousness . This motif subsequently led to several publications on the subject of unity and freedom. From 1814 to 1818 he was editor of the magazine “ Nemesis ” and from 1816 to 1817 of the “ General Constitutional Archives ”, the so-called “Sidecar of Nemesis ”. In Leipzig he edited the " Deutsche Blätter ".

In his “almost legendary” lectures, which are popular with students, he called for popular sovereignty, among other things . This important demand shows the intellectual influence of the French Enlightenment, especially Rousseau . It is fairly certain that he came into contact with this idea through Johann Gottlieb Fichte , who taught philosophy in Jena until 1799 and who represented this demand. In contrast to some other Jenenser professors such as the physician Dietrich Georg von Kieser (1779–1862), the physician and natural scientist Lorenz Oken or the philosopher and mathematician Jakob Friedrich Fries (1773–1843) he did not personally take part in the Wartburg Festival in 1817 ; but his ideas and writings are directly related to it. The "Principles and Resolutions of the Eighteenth of October", which emerged from the Wartburg Festival and published in 1818, can largely be traced back to Luden. In 1820 Luden joined the state estates of the Grand Duchy of Saxony-Weimar-Eisenach as a deputy and remained one of the most active members until 1832. As a result of the Karlsbad resolutions , an investigation was carried out at the German Confederation under pressure from Prussia , which led to its political lectures being banned. However, a request to the Grand Duchy to stop Luden's teaching activity remained unsuccessful.

His main work, the "History of the German People", was under the impression of a new German national feeling. However, Luden and his work are by no means to be classified in the romanticizing history of the German Middle Ages that predominated in the 19th century. Above all, the Ranke School accused him of not using a historical-critical method . In the meantime, however, his German history is considered to be a far more neutral representation than that of the subsequent national German historians who politically exaggerated the German kingship of the Ottonians , Salians and Staufers in their striving for unification.

Along with Lorenz Oken , Jakob Friedrich Fries , Dietrich Georg von Kieser and Christian Wilhelm Schweitzer, Luden is one of the so-called political professors at the University of Jena around 1800. He is considered to be one of the ' spiritus rectores ' of the Jena student fraternity , whose founding statutes he at least helped formulate. One of Luden's students was the later Königsberg history professor and university archivist Johannes Voigt , who made an outstanding contribution to the history of Prussia .

Luden married in 1804 with Johanna Catharina Sophia Köhler (born December 1, 1780 in Celle; † 1847), the daughter of the innkeeper Johann Gottlieb Köhler in Celle and his wife Anna Louise Dorothea Voss. The following well-known children emerged from the marriage:

Letter from Heinrich Ludens to his father

The Neue Deutsche Burschenschaft has been awarding the Heinrich Luden Prize, now endowed with 2000 €, to committed students every year since 2008 , whereby they share “the academic achievements, the social commitment and [the] commitment to corporations in equal parts considered."