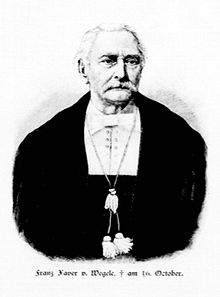 Franz Xaver von Wegele (born October 29, 1823 in Landsberg am Lech , † October 17, 1897 in Würzburg ) was a German historian and co-editor of the Allgemeine Deutsche Biographie (ADB).

Wegele studied at the universities of Munich and Heidelberg . In politically troubled times , he was able to do his habilitation in 1849 and then got a teaching position for history at the University of Jena .

Two years later Wegele was appointed "Professor of History" there. In 1857 he accepted a position at the University of Würzburg . The following year he was accepted as a member of the Historical Commission in Munich . There he was instrumental in the publication of the ADB for many years. Since 1860 he was a foreign member of the Bavarian Academy of Sciences .