from Wikipedia, the free encyclopedia
This is the sighted version , flagged on January 14, 2020 . There are 2 pending changes that have yet to be viewed.

The Saxon Academy of Sciences in Leipzig (SAW) is a corporation under public law with its seat in Leipzig . It unites around 200 full members from the federal states of Saxony , Saxony-Anhalt and Thuringia as well as corresponding members from Germany and abroad. The academy is one of eight members of the Union of German Academies of Sciences . 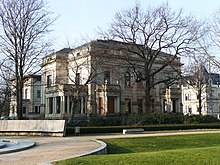 Seat of the academy on Karl-Tauchnitz-Straße in Leipzig

On April 3, 1846, a group of thirteen professors from the University of Leipzig (probably at the suggestion of the later Saxon minister of culture, Johann Paul von Falkenstein ) submitted an application to the Saxon Ministry of Culture to found a society of science . After the Society's statutes were confirmed on June 23, 1846 by the King of Saxony Friedrich August II. (1797–1854), the Royal Saxon Society of Sciences was founded on July 1, 1846 , the 200th birthday of the Scholar Gottfried Wilhelm Leibniz (1646–1716), whose place of birth is Leipzig.

Since July 1, 1919, the society has been called the Saxon Academy of Sciences in Leipzig .

The 1992 constitution of the Free State of Saxony declared the state to be the sponsor of the academy. In 1994 a law gave it the status of a corporation under public law.

The academy is a legal corporation under public law with the right of self-administration. The current president has been Hans Wiesmeth since January 1, 2016 .

The academy and its classes hold regular meetings. The academy also forms various structure-related and project-related commissions. The academy is currently running over 20 research projects in the humanities. Around 100 scientific staff are employed in these long-term projects. The SAW thus combines the activities of a scholarly society with the work of a research institute. The academy maintains its own series of publications and an archive that is significant in terms of the history of science.

The academy is currently running over 20 research projects in the humanities. The most important musicological project is the Leipzig edition of the works of Felix Mendelssohn Bartholdy , but also the letters of the Leipzig-based Robert and Clara Schumann are published and there is a Bach repertory . In the linguistically oriented projects, a. the Old High German Dictionary . In the field of law and political science there is the Codex diplomaticus Saxoniae and a project on Saxon-Magdeburg law . In the field of literary studies z. For example, the letters by Philipp Jacob Spener , Johann Christoph Gottsched and Friedrich Heinrich Jacobi are edited, and the Propylaea project is creating a research platform on Goethe's life, work and work. In Judaism , an encyclopedia of Jewish cultures is published . A key basic project in the history of the Reformation began in 2014 with the edition of the files and letters on church policy of Frederick the Wise and John the Constant 1513 to 1532 , which focuses on the sovereigns of Martin Luther. More recent projects in the field of Indology are devoted to the scientific treatment of Buddhist cave paintings in the Kuča region and, in the field of Arabic studies, to research into Arabic-language literatures between 1150 and 1850.

The following structure-related commissions work at the SAW: the historical commission , the commissions for regional studies , for art history, literary and musicology , for the art history of Central Germany , for linguistics , for technology assessment and design , for environmental problems , for science and values , for the history of science (Natural sciences / mathematics / technology) , for intercultural historical basic sciences and for expansion in nature, technology and society. The members of the commissions are recognized experts in the relevant disciplines and are appointed by the President.

The SAW has been publishing the magazine "Denkströme - Journal of the Saxon Academy of Sciences" since 2008, which mostly appears twice a year. It publishes articles on current topics from science and science development. Individual scientific research contributions are included in the booklet as well as discussions on scientific and socio-political issues. The magazine appears in a print edition and an online edition, which is under a Creative Commons license .

The Saxon Academy of Sciences in Leipzig awards: