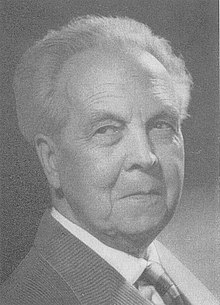 Hermann August Korff grave in the south cemetery in Leipzig

Korff was the son of the Bremen entrepreneur Wilhelm August Korff and his wife Agathe. From 1902 to 1906 he studied German , history and philosophy at the Rheinische Friedrich-Wilhelms-Universität Bonn and the Ruprecht-Karls-Universität Heidelberg . In 1907 he was in Heidelberg with the dissertation Scott and Alexis. A study of the technique of the Dr. phil. PhD. In 1913 Voltaire followed his habilitation as a classicist author in 18th century literary Germany at the Academy for Social and Commercial Sciences in Frankfurt am Main.

Korff retired in 1954. He was a member of the Saxon Academy of Sciences in Leipzig.

His most important work is the spirit of the Goethe era . In the four-volume work he understands the end of the 18th and the beginning of the 19th century as a uniform epoch in the German-speaking area, which in Hegel has its philosophical and in Goethe its poetic expression.