King Friedrich August II of Saxony on a painting by Carl Vogel von Vogelstein , around 1836

Friedrich August together with his uncle Anton on the medal for the constitution of the Kingdom of Saxony from September 4, 1831 . 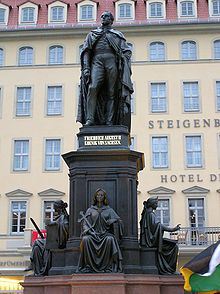 Statue on the Dresden Neumarkt

Friedrich August was the eldest son of Prince Maximilian of Saxony (1759-1838), the youngest son of Elector Friedrich Christian . His mother was Caroline of Parma (1770-1804), the daughter of Duke Ferdinand of Parma and Maria Amalia of Austria .

Friedrich August was an officer in the Wars of Liberation , but otherwise showed little interest in the military. He solved political questions out of a pure sense of duty. Usually he appealed to his ministers. In 1836 he took over the government from his uncle Anton , with whom he had been co-regent of the prince since September 1830. As an extremely lovable and intelligent man, he quickly became popular with the people. The town order of February 2, 1832 gave the towns free self-government.

By his edict of March 17, 1832, the peasants were exempted from forced labor and hereditary servitude . The penal code of 1838 created uniform jurisdiction for Saxony. During the March Revolution of 1848/49 he appointed liberal ministers to the government, lifted censorship and passed a liberal electoral law for the state parliament . But later he changed his attitude. On April 28, 1849, Friedrich August II dissolved the state parliament. During the Dresden May Uprising in 1849, he went to the Königsstein Fortress with the Queen and all the ministers.

One year after the death of his first wife, he married Princess Maria Anna (1805–1877), daughter of the Bavarian King Maximilian I Joseph . This marriage also remained childless.

An illegitimate son of Friedrich August was the musician, publicist and composer Theodor Uhlig (1822-1853).

During a trip in Tyrol , his horse-drawn carriage had an accident on August 9, 1854 in Karrösten . He died in the Gasthof Neuner, which still exists today, after he fell out of the carriage and was kicked in the head by a horse.

He was buried on August 16, 1854 in the royal crypt of the Catholic Court Church in Dresden. In his memory, the widow Marie von Sachsen had a royal chapel built at the scene of the accident , which was consecrated a year later.

He was succeeded by his four years younger brother Johann ; he ruled Saxony until his death in October 1873.