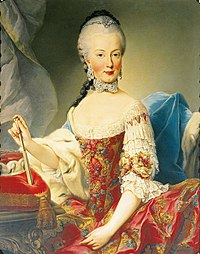 Maria Amalia of Austria (born February 26, 1746 in Vienna , † June 18, 1804 in Prague ) born Archduchess of Austria and Princess of Hungary, Bohemia, Tuscany and came from the House of Habsburg-Lothringen . She was Duchess of Parma .

Born as the daughter of Maria Theresa of Austria , Archduchess Maria Amalia von Habsburg-Lothringen grew up at her mother's court in Vienna. At the age of twenty-three, she was married to Duke Ferdinand of Bourbon-Parma against her will and despite fierce resistance . She was the only child of Maria Theresa who escaped the influence of her mother until the final break. The duke and couple of Parma proved their worth during the occupation of Parma by Napoleon's troops . Only after the death of her husband was Maria Amalia forced to withdraw to Prague . 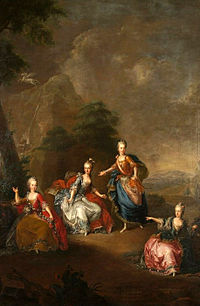 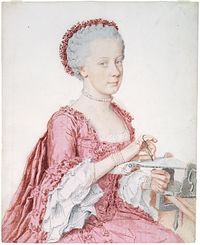 Childhood and youth as the daughter of Maria Theresa

Maria Amalia Josepha Johanna Antonia, Archduchess of Austria and Princess of Bohemia, Hungary and Tuscany, was born on February 26, 1746 as the eighth child and sixth daughter of Empress Maria Theresa and her husband Franz I Stephan of Lothringen in Vienna.

As with her siblings, the Archduchesses and Archduchesses, upbringing was based on a strict training program that Empress Maria Theresia had developed especially for her children. The schedule included dance lessons , theater performances , history , painting , spelling , civics , a little math and learning foreign languages. The girls were also instructed in needlework and conversation . Like her siblings and mother, she received piano lessons from Georg Christoph Wagenseil .

Maria Theresia and her minister Kaunitz pursued the ambitious goal of improving Austria's political relations with other states and Austria's position in Europe . Family ties often resulted in a strengthening of foreign policy influence and therefore Maria Theresa developed marriage plans for her 13 surviving children at an early age. In constant fear of Frederick II of Prussia , she concentrated on expanding family connections to the Bourbons then ruling in France , Spain , Naples-Sicily and Parma , and hoped that this would improve communication between the Habsburgs and the Bourbons.

Maria Amalia was described as haughty, conceited and lively by her mother, who carefully documented the character traits of her children. These characteristics may be due to the fact that Maria Amalia - although born as the eighth child of Maria Theresa's 16 children - was raised as an only child and thus a little isolated. The sisters Marie Christine (1742–1798) and Maria Elisabeth (1743–1808), born before Maria Amalia , and the subsequent sisters Johanna Gabriela (1750–1762) and Maria Josepha (1751–1767) were too far away from her in terms of age to to be raised together with her. The siblings were separated from each other by an age difference of three to four years.

At the age of 22 she fell in love with the young and handsome Prince Karl von Zweibrücken . The Austrian Minister Kaunitz and Maria Theresa rejected the politically insignificant prince's proposal and instead promised the Archduchess Duke Ferdinand of Parma. Maria Amalia's brother, Emperor Joseph II , endorsed the connection, since Duke Ferdinand was the younger brother of his beloved and early deceased wife Isabella of Parma . When Maria Amalia was informed by her mother about the planned wedding with Ferdinand von Bourbon-Parma, she reacted with fits of screaming and defiant behavior. She had hoped to the end that Maria Theresia would let her choose her husband and that she, like her older sister Marie Christine, could enter into a love marriage. At the time of the engagement, the duke was only 17 years old.

Life at the court of Parma

Ferdinand and Maria Amalia of Bourbon-Parma

Parma was a small duchy in northern Italy that had been ruled by a branch line of the Spanish Bourbons since 1748. Ferdinand of Bourbon-Parma was the son of Duke Philip of Parma and his wife Marie Louise Élisabeth de Bourbon, a daughter of the French King Louis XV. and was five years younger than his future bride. Maria Theresa saw the marriage between her daughter and the heir of the Duchy of Parma as an opportunity to exert more influence on the government of Parma and to influence politics in favor of Austria. Maria Amalia finally bowed to her mother's will and agreed to marry the Duke of Parma. The wedding by procurationem took place on June 27, 1769 in the Augustinian Church in Vienna. The actual wedding took place on July 19th in the Palazzo Ducale di Colorno in the city of Colorno . As part of the wedding celebrations, theatrical performances in an amphitheater and luxurious celebrations were held.

The wedding night and the actual execution of the marriage were to take place in the city of Colorno. However, Maria Amalia refused to consummate the marriage and shrank from her husband's advances. The distant behavior of the Duchess was justified with the poor hygiene of the young man. Despite the court's efforts to improve the Duke's sanitary condition, it took another two months before the marriage was finally consummated. The very promiscuous King Louis XV himself . von France wrote several letters to his grandson during this period containing advice for a more fulfilling married life.

Maria Amalia and her husband were two very different characters. While Maria Amalia tended to be extroverted, haughty and dominant, Ferdinand von Bourbon-Parma was a withdrawn, humble, pious and meek young man for whom the well-being of the people was the top priority. Ferdinand von Parma lost his mother at the age of eight and became an orphan at the age of fourteen. His father's death came as a surprise and overwhelmed the young duke. During this time, a close relationship of trust developed between Ferdinand and the French minister Guillaume Du Tillot , who familiarized the young duke with government affairs.

Maria Theresia wanted to grant her daughter an annual pension to support the young couple. In the end, despite the protests of her son Emperor Joseph II, she received the approval of the French and Spanish courts. At the beginning of the marriage, Maria Theresa tried to influence her daughter's life in the form of letters. 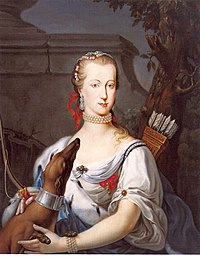 Du Tillot tried to influence Parma's policy in favor of France and had first proposed the heiress of Modena, Maria Beatrice d'Este , as the bride for the young duke. A tense relationship therefore existed between Maria Amalia and the French minister from the beginning, which over time would develop into a personal enmity. Maria Theresa sent Count Rosenberg to Parma with the aim of keeping the Duchess away from government affairs and bringing her to her senses: “The errors and unpleasant events that have arisen in Parma since the day our daughter Amalie joined the Infante and Duke of Parma as well known to the count as, unfortunately, all of Europe, which they serve for fable and laughter. ” Quite objectivity, very sovereign, she then explains to the count how she first attributed all the mistakes and encroachments of the daughter to her great youth, as she first warned, then kept silent and how she now, at the instigation of Spain and France, made the last attempt to bring Amalie back into her place. She also wrote: “... the Count will assure you most succinctly that I will not only publicly disapprove of its performance, but also, no matter what, I will not take it on any occasion in order to preserve my honor and peace To leave fate to their stubbornness and their wretched counselors forever. "

Ferdinand of Bourbon-Parma was a weak character and was dominated by his wife in private and political affairs. She was therefore soon given the nicknames La Signora and La Mata in public , which alluded to her dominant nature. On the other hand, she was also spontaneous and lovable, so that the people of Parma both admired and disliked her. In 1771 Maria Amalia got Minister Du Tillot to leave his office. Now she was able to enforce her political ideas unhindered. King Charles III of Spain , Amalia's brother-in-law, appointed the Spaniard Jose de Llano as the new Minister of Parma. When the change of ministers could not stabilize the situation at the court of Parma and Maria Amalia continued to disregard her mother's advice, Charles III broke. and Maria Theresa cut off contact with Parma. Maria Theresa complained about the unheard-of behavior of the "grimacing in Parma" and forbade her entire family from correspondence with the Duchess of Parma. Maria Amalia's behavior not only attracted her mother's displeasure, but also the Bourbon relatives. Louis XV of France, Ferdinand warned against his wife and advised his grandson in one of his letters to regard Maria Amalia as a foreigner and an attention-loving person who should be avoided.

Maria Amalia kept in contact with her sisters Maria Anna and Maria Karolina and got on well with them. She liked to go hunting, which was a welcome change from her otherwise monotonous life at the court in Parma.

Ferdinand and Maria Amalia lived in different worlds since their wedding. The only thing that connected these different people with each other was the goal of fathering a male heir to the throne as quickly as possible. Although Maria Amalia distanced herself more and more from her husband and felt more drawn to the young guard officers, she gave birth to seven children during their marriage, four of whom reached adulthood: Caroline (1770-1804), Ludwig (1773-1803), Maria Antonia (1774–1841) and Charlotte (1777–1813). In 1773 Maria Theresa tried unsuccessfully to reconcile with her daughter.

In 1796 French troops invaded Parma. Ferdinand tried to remain neutral in order to protect the people. In the Treaty of Aranjuez, Napoleon decided that Parma should become French territory and that Ferdinand's son Louis of Bourbon-Parma should take over the rule of the Kingdom of Etruria . After Ferdinand's death in 1802, the contract was implemented and Maria Amalia had to leave Parma. Despite her controversial behavior, she had won the affection of her people during her marriage to Ferdinand. Moreau de Saint-Méry became the new governor-general in Parma and Maria Amalia decided in November 1802 to take her widow's residence in Prague, where she died in 1804. Her body was buried in St. Vitus Cathedral in Prague. Her heart was buried separately and brought to Vienna in the Loreto Chapel of the Augustinian Church . 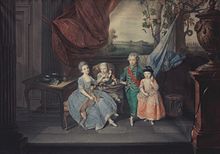 The children of Maria Amalia and Ferdinand

Maria Amalia and Duke Ferdinand of Parma had seven children: