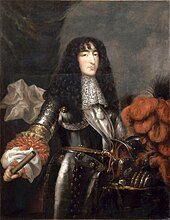 At court he was commonly called monsieur , which was the official title of the king's brother, and his wives were called madame .

Child portrait of Philip (right) and his brother Ludwig; attributed to the Beaubrun brothers

Duke Philip was a son of King Louis XIII. of France and Anna of Austria as well as the brother of Louis XIV. His childhood was overshadowed by the Fronde riots in the period after his father's death.

As was customary at the time, Philipp and Ludwig were dressed like girls when they were toddlers; gender-specific upbringing only began in this era from the age of five or six. Because the business of government, Cardinal Mazarin, feared the dangers of a strong brother of the future Louis XIV. The claims to power of the brothers Louis XIII were to him. still omnipresent - he is said to have deliberately influenced the fact that Philip was not brought up to be a potential heir to the throne, although he would have succeeded his brother to the throne between 1643 and 1661 if his brother died.

Philipp, who already showed a more feminine behavior as a child, was treated and dressed like a girl in the following years, all masculine behavior was deliberately suppressed and the boy was instead showered with jewelry and clothes. The Marquis d'Argenson said: “The Abbé de Choisy has repeatedly confirmed something that he briefly mentioned in his memoirs, namely that it was a consequence of Cardinal Mazarin's policy that Monsieur, the king's brother, raised in an extremely effeminate way, which made him faint-hearted and despicable ... "

Later Louis XIV kept his brother away from active politics and any influence on the government, in which, however, he showed little interest; instead he indulged in a dissolute lifestyle. So he kept a court of favorites and his homosexuality , although officially punishable and occasionally punished with execution for the less privileged, was an open secret. The bisexual affairs of his father Louis XIII were similar . and has been the subject of many gossip stories of his brothers Gaston and César . Madame de La Fayette wrote: “His inclinations corresponded as much with the feminine tastes as those of the king were remote from him. He was handsome, well built, but his beauty and form suited a princess rather than a prince; moreover, it was more important to him that the world admired his beauty than to use it to make women fall in love with them ... ”It is said to have been a nephew of Cardinal Mazarin, Philippe Mancini (1641–1707), who did the introduced the young prince into the (then so-called) "Italian vice" .

Louis XIV expressed himself in his memoirs as follows: “For those who rule, it can be advantageous to see how those who are close to him by birth move far from him through their behavior. The greatness and majesty of his soul is revealed by the contrast to its softness; what he shows in drive and striving for fame appears infinitely more brilliant when you see nothing around him but burdensome idleness or petty inclinations. " 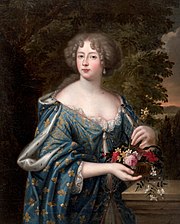 Liselotte of the Palatinate , Duchesse d'Orléans (by Pierre Mignard , 1675)

In 1660 Philip was made Duke of Orléans . In 1661 he was married against his will for political reasons to Henrietta Anne Stuart , the sister of Charles II of England . The marriage was not happy and Henrietta got into arguments with Philip's favorites, so that it was speculated that the early death of the Duchess in 1670 caused poisoning.

In the following year Philippe married Elisabeth Charlotte (called Liselotte von der Pfalz ), daughter of Elector Karl I von der Pfalz . This marriage, which was also arranged, produced three children (his firstborn son Philipp, Duke of Valois, died at the age of 2), but after the birth of the children, Philipp ended the marital relationship. Liselotte later describes her husband as follows: "Mons (ieur) didn't look ignoble (" ignoble "), but he was very short , had pitch-black hair, eyebrows and eyelids, big brown eyes, a very long and rather narrow face, a big one Nose, a mouth that was too small, and ugly teeth, had more feminine than man's manners, loved neither horses nor hunting, nothing but games, holding cercles , eating well, dancing and being well-groomed, in a word, everything that ladies love."

Philippe de Lorraine, known as 'Chevalier de Lorraine' (1643-1702), was Monsieur's most important favorite and lover for many years

Saint-Simon describes the behavior of the Duke of Orléans as “a vice that he brought to the attention of the public in the most scandalous way through the gifts, contributions and the splendid position with which he showered his favorites.” Philip's most famous favorites or lovers were Armand de Gramont, Count of Guiche , the Chevalier Philippe de Lorraine (1643–1702 - a son of Henri de Lorraine, comte d'Harcourt ), the Marquis d'Effiat and the Marquis de la Vallière. Lorraine and Effiat stayed with him until the end of his life, although they were suspected of murdering Henrietta, and received or withheld vast sums of money, which the former gambled away and the latter hoarded. Lorraine was even appointed abbé of four royal abbeys, from which he drew income. In return, the favorites Monsieur provided a steady supply of young men. His court also included Madame de Grancey and Mademoiselle de Gordon-Huntley, as well as Antoine Morel de Volonne, whom Monsieur made Liselotte's steward between 1673 and 1683 . She wrote about Morel: "He stole, he lied, he swore, was Athée ( atheist ) and sodomite , kept school away, and sold boys like horses, went downstairs to the opera to make his purchases." The clique of courtiers tried successfully to alienate the duke from his second wife; Her only friend in the Palais Royal was the lesbian chief stewardess Catherine Charlotte de Gramont , Princess of Monaco, who tried in vain for her love.

Primi Visconti tells of a homosexual brotherhood that was founded in 1680. She parodied the rules of the Order of Saint-Michel and Saint Lazare. Among the founding members were the Count of Guiche, his brother Gramont, Tilladet, Manicamp, Biran and Tallard. The identification mark of this order was a sculpture depicting a man kicking a woman in the dust with his feet. Interestingly, the young Count of Vermandois , a legitimate son of the Sun King, was among the members. It was only after various scandals, including the murder of a wafer seller who was unwilling to serve as a pleasure boy, that Louis XIV stepped in and imposed harsh penalties on the members of that brotherhood, which was not Philippe himself but most of his favorites.

Despite the stones that Philippe got in the way of his older brother, he developed into a capable general. After having fought with honors in the War of Devolution in Flanders in 1667 , Monsieur won a great victory in the Battle of Cassel (in the Artois ) in 1677 and achieved the surrender of Saint-Omer . After that, however, Orléans never commanded an army again. When Louis XIV tried to conquer the alleged inheritance of his sister-in-law in the Palatinate War of Succession , Philippe received large sums of the "Orléans money" that the French troops had captured in the devastated Palatinate; his wife received none of it, he gambled away, squandered and distributed it among his favorites.

Philippe lived in Paris in the Palais Royal , which he made a place of free-spirited, cosmopolitan development, and, a few kilometers west of Paris, in Saint-Cloud Castle .

In 1701, at the age of 60, he succumbed to a stroke after having had a violent argument with his brother the day before. The point was that Philippe's son should not receive any military command during the campaign to Flanders, since the king accused his nephew (and son-in-law) of his adulteries; the duke thereupon reproached the king for the same thing, and the latter in turn accused him of something similar; the two brothers yelled at each other so much that a servant rushed into the room to warn them that the courtiers in the adjoining drawing rooms could overhear everything. Philippe then sat down at the table with a bad nosebleed; that same evening he suffered a blow from the river and passed away the next noon after the king had briefly come to his deathbed.

In his will he called for 6,000 soul masses and gave all relatives and many friends generous legacies. But his own wife was not even mentioned in his last will. Although she was entitled to a pension from her husband's estate and to the return of her dowry in the amount of 600,000  livres , there was no cash available and her husband had gambled away Liselotte's movable property and distributed it to his favorites. The widow received a sufficient annual pension because the king and her son, who was now Duke of Orléans, Philip II , stepped in.

Since Philip I had left debts of around 7.5 million livres, his son had to sell his jewelry and jewelry dealers from all over Europe came to Paris to view and buy the largest jewelry collection that had ever come on the market. Because of the oversupply, the proceeds were below value - only 500,000 livres, far less than the jewelry was worth.

Philip was buried in the tomb of the French kings, the cathedral of Saint-Denis . When the royal tombs of Saint-Denis were sacked during the French Revolution , his grave was opened and looted on October 16, 1793, and his remains were buried in a mass grave outside the church.

Her marriage to Henrietta Anne Stuart had four children:

With Liselotte von der Pfalz he had three children:

Commons : Philippe I of France, Duke of Orléans  - Collection of images, videos and audio files