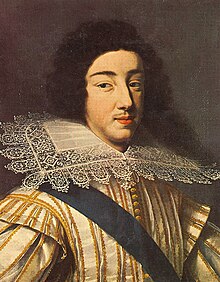 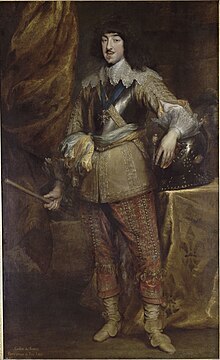 Gaston of France, Duke of Orléans (born April 25, 1608 in Fontainebleau Castle , † February 2, 1660 in Blois Castle ), was a prince from the French royal house of Bourbon and younger brother of King Louis XIII.

Gaston was the fifth of six children of King Henry IV and his wife Maria de 'Medici . He was the third (and second adult) son and was given the title of Duke of Anjou at birth . He was two years old when his father was murdered by an assassin.

He was considered educated and subtle, but rather weak-willed and fickle . Since he was due to the long-term childlessness of his six years older brother, Ludwig XIII. , the next heir to the throne, he was repeatedly instrumentalized by ambitious nobles and drawn into their uprisings against the absolutist policies of Cardinal Richelieu and later Cardinal Mazarin .

At the age of 18 he was married in 1626 at the instigation of Richelieu, but against his will, to Marie de Bourbon, duchesse de Montpensier , and on this occasion by his brother Louis XIII. enfeoffed with the Duchy of Orléans and the County of Blois . Marie brought the Duchy of Montpensier into the marriage. However, she died in childbed barely a year later. Her considerable fortune as her father's sole heir went to her surviving daughter, who later became “Grande Mademoiselle” (see below).

In 1628, Gaston nominally assumed command of the army that besieged the Protestant fortress of La Rochelle .

In 1630 he took part in a revolt against Richelieu and called for an armed uprising against him and thus the French crown. However, after one of the most important rebel leaders, the Duke of Montmorency , was defeated with his troops at Castelnaudary and taken prisoner himself in 1632 , Gaston left France.

In 1632 he lived at the court of Duke Charles IV of Lorraine , who, as a feudal man and ally of the Roman-German emperor, was at war with France. Here he married without the consent of his brother Louis XIII. the duke's sister, Margaret of Lorraine. In 1634 he signed a secret treaty with Spain, which was also at war with France. However, a little later he reconciled himself with his brother and returned to the French court.

His privileged position as aspirant to the throne ended in 1638 when the queen, Anna of Austria , after 20 years of marriage to Ludwig, surprisingly gave birth to an heir to the throne (later Louis XIV ) and a little later a second son, Philip . Gaston, who was over-indebted, now had trouble getting loans and had to stop the renovation of the Blois Castle , among other things .

In 1642 a conspiracy that Henri Coiffier de Ruzé, Marquis de Cinq-Mars had tried to organize, to make Gaston lieutenant-général du royaume after the death of Richelieu, failed . Gaston got after the death of Louis XIII in 1643. the title, but Anna took over the reign of the five-year-old Louis XIV with the help of the Parliament of Paris and installed the energetic Cardinal Mazarin as minister.

After all, Gaston was successful in 1644 as chief of the French troops in the north. He conquered large parts of the Spanish Netherlands belonging county of Flanders .

During the Fronde uprisings of the Parlements and the nobility against Mazarin, which began in 1648 , Gaston switched indecisively from one party to the other. After Mazarin's victory in 1652, he was exiled to Blois, where he remained until his death. He was buried in the basilica of Saint-Denis . When the royal tombs of Saint-Denis were sacked during the French Revolution , his grave was opened and looted on October 15, 1793, and his remains were buried in a mass grave outside the church.

Gaston was the first and only representative of the third house of Orléans. Since he died without a male heir, the Duchy of Orléans and the title were given to his nephew Philip, the younger brother of Louis XIV, who, as Philip I, became the progenitor of the fourth house of Orléans, which still exists today.

Gaston's widow, Margaret of Lorraine, resided mostly in the Parisian Palais du Luxembourg after his death . There she housed and supported the fable poet Jean de La Fontaine as a “gentilhomme ordinaire”, a kind of noble domestics (“officiant”).

Gaston's marriage to Marie de Montpensier (1605–1627) resulted in a daughter:

His marriage to Margaret of Lorraine (1615–1672) had four daughters and a son who, however, died early:

Charles Plumier named a genus Borbonia in his honor . Carl von Linné later did not take over this genus, but placed it in the genus Laurus of the laurel family of plants (Lauraceae).

Linnaeus named the genus Borbonia of the legume plant family (Fabaceae) after him . Today she is synonymous with Aspalathus .