Marie de Bourbon on a colored drawing, after 1627

Marie de Bourbon (born October 15, 1605 at Gaillon Palace ; † June 4, 1627 in the Louvre , Paris ), often also called Mademoiselle de Montpensier , was Duchess of Montpensier in her own right and one of the richest heiresses in France at her time. Some of her other titles were Duchess of Saint-Fargeau and Châtellerault , Sovereign Princess of Dombes ( French princesse souveraine de Dombes ), Princess of La Roche-sur-Yon ( French princesse de La Roche-sur-Yon ), Dauphine d'Auvergne , Marquise of Mézières, Countess of Mortain and Bar-sur-Seine and Baroness of Beaujeu .

Engaged to Nicolas de Bourbon, the second-born son of the French king, at the age of two, after his unexpectedly early death she was married to the youngest son of Henry IV and died in childbed six days after the birth of their first child. Her newly born daughter Anne Marie Louise inherited her immense fortune and titles and later went down in history as La Grande Mademoiselle .

Marie was the only child to Henri de Bourbons and his wife Henriette Catherine de Joyeuse at Gaillon Castle in Normandy . As a member of the House of Bourbon , she was a princess of the blood and closely related to the French royal family. Her mother was the last offspring of the Joyeuse Bourbon branch and had brought an enormous dowry into the marriage, giving Marie's parents one of the largest possessions in France. Ardent advocate of the Catholic faith, Marie's father wanted to prevent this enormous fortune from falling to the Protestant relatives of the Bourbon-Montpensier line and negotiated a marriage for his daughter with Nicolas, the second son of the French King Henry IV. Marie was just two years old when she was betrothed to Nicolas on January 14, 1608. Her father died only a month later, and Marie, before she was three years old, succeeded him as Duchess of Montpensier, and from that day on she held the title of Peer of France . Growing up in Paris, she was initially under the guardianship of her great-uncle François de Joyeuse , before her mother later took over the guardianship of her. 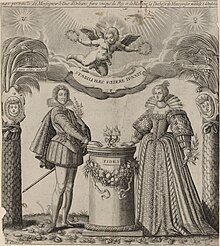 When Marie was six years old, her fiancé died in November 1611. From then on, Queen Maria de 'Medici engaged in a new engagement of the “richest heiress in France”, this time to her youngest son Gaston , and was supported by Cardinal Richelieu . The main aim was to secure the Montpensier fortune for the royal family, because in addition to extensive land holdings, Marie also had large cash assets and annual income of 330,000  livres . But Gaston showed his "aversion" to such an arranged marriage, and he found numerous supporters who were also against this connection. Opponents of the marriage were found mainly in the ranks of the Princes of the Blood, who because of the childlessness of Louis XIII. and the celibacy of Gaston's hopes for the French throne. Ludwig's wife Anna of Austria also tried to intervene against her mother-in-law's plans because she feared that her already difficult position at court would be weakened. A group of conspirators was formed around the king's brother, whose aim was not only to prevent the marriage, but also to murder Richelieu. But the plot - named after one of its participants, the Count of Chalais , Conspiracy of Chalais or Plot of Chalais ( French Conjuration de Chalais or Complot de Chalais ) - was uncovered and those responsible were brought to justice. Jean-Baptiste Gaston was pardoned, but in return had to marry the unloved woman with the petite figure and ash-blonde hair. The marriage contract was signed in Nantes on August 5, 1626 , and the following day Cardinal Richelieu's wedding ceremony took place in the Saint-Pierre-et-Saint-Paul cathedral . Marie received a diamond worth 80,000  Écus from her mother, who was her second marriage to the Duke of Guise , as a wedding gift . The groom became the Duke of Orléans appointed and was the prerogative also the Duchy of Chartres , the Counts of Blois , the Seigneurie Montargis and alimony in the amount of 600.00 livres and a pension of 200.00 livres. The church marriage was followed by eight-day, exceptionally pompous festivities.

According to contemporary reports, Marie had no sympathy for her husband, whose character traits and moral ideas were completely opposite to hers. However, she submitted to her fate and henceforth devoted herself intensively to the tasks that her new position entailed. This also included giving birth to a Bourbon lineage holder. When the young duchess became pregnant only a short time after the wedding, she already believed she was the mother of the future heir to the throne, but on May 29, 1627, during a complicated delivery, only one girl was born, who was baptized with the name Anne Marie Louise. The later Grande Mademoiselle inherited not only the resistant character of her father, but also her mother's fortune when she died in childbed at the age of 21 just six days after giving birth on June 4, 1627 at ten a.m. The exact cause of death is not clear. The doctors who declared Marie dead noted abdominal cancer in the death certificate, but an autopsy carried out at Maria de 'Medici's instigation is said to have determined puerperal fever as the cause of death. This led to negligence charges against midwife Louyse Bourgeois , who also helped Marie's husband Gaston into the world. Bourgeois resisted in a bitter polemic, but lost their reputation at the royal court.

Marie's embalmed body was then laid out in a lead coffin for two weeks in the Louvre before it was brought to the Tuileries Palace for five days on June 20 , where numerous people paid their final respects. On the night of June 24th to 25th, a cart pulled by six white horses brought the body to the cathedral of Saint-Denis , where the burial took place on June 30th. Marie's heart and entrails found their final resting place on June 8, 1627 in the choir of the church of the Capuchin convent at the time in the Rue Saint-Honoré . Her mother Henriette Catherine had a marble plaque with an inscription put up in the church in memory of her daughter , which was lost during the French Revolution in 1793.