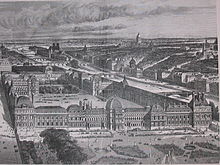 Ruins of the palace on the island of Schwanenwerder in Berlin 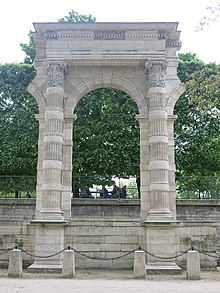 Remains of the arcades, placed in the Jardin des Tuileries

The Palais des Tuileries ( German  Tuileries Palace ) in Paris was the former city palace of the French rulers, about 500 meters from the royal residence of the Palais du Louvre and temporarily connected to it by large wing structures. It burned down during the uprising of the Paris Commune in 1871 and was later demolished.

Today only the magnificent Jardin des Tuileries park, decorated with many statues, reminds of the former castle. It extends on the right bank of the Seine from the Pavillon de Flore of the Louvre to the Pavillon de Marsan opposite, parallel to the Place de la Concorde . This is also where the Galerie nationale du Jeu de Paume, housed in a former ballroom , is located .

The Palais des Tuileries was built from 1564 at the instigation of Catherine de Medici according to plans by Philibert Delorme in place of an earlier brick factory (French: la tuilerie ). After Katharina's death, the palace was not completed.

Henry IV came up with the plan to connect the Palais du Louvre and the Tuileries by building two galleries in the south and north. This project, called Grand Dessein , saw the creation of a single, huge palace through the connection of the two palaces; this plan, too, was not fully implemented. Only under Charles IX. the Grande Galerie was built in the south along the Seine . In the 17th century, after Louis XIV moved his residence to the Palace of Versailles , the Tuileries lost its importance and was even temporarily empty. In the concert hall (French called Salle des Cent-Suisses , German literally “Hall of the Hundred Swiss”) the Concerts spirituels took place from 1725 , from 1784 in the Salle des Machines (Théâtre des Tuileries).

From October 6th, 1789 , during the French Revolution , the castle was the residence of the royal family who were imprisoned here. Initially, this was able to hold court to a greater extent, until it finally had to accept increasingly severe restrictions. On August 10, 1792, the Tuileries storm occurred . A large part of the Royal Swiss Guard fell victim to the attackers, as the Lion Monument in Lucerne is a reminder. Louis XVI , Marie Antoinette and her children were taken to Temple prison as a result of these events .

From 1806 work on the union of the two palaces was resumed. Charles Percier and Pierre-François-Léonard Fontaine started with a north wing parallel to the Grande Galerie , the Galerie Napoléon. Under Louis XVIII. and during the Second Empire work continued under the architects Louis Visconti and Hector Lefuel . Napoleon III was able to inaugurate the completed Nouveau Louvre in 1857. During the uprising of the Paris Commune in May 1871, the Tuileries were set on fire. The four Citoyens Bergeret , Bénot, Boudin and Mabeuf had a load of petroleum and turpentine oil, liquid tar and gunpowder filling five heavy carts across the building. From a terrace of the Louvre they followed the spectacle of the conflagration. Boudin and Bénot were executed in 1872 and 1873. The ruins were demolished in 1880 except for two small pavilions. The two remaining pavilions served from 1887 as the Salon des Independants known Societe des Artistes Independants as an exhibition space.

A small remnant of ruins was sold in 1871 and taken to Berlin . The limestone column has stood there on the island of Schwanenwerder ever since . The inscription on the base of the column reads: "This stone from the beach of the Seine / planted in Germany, calls you, wanderer, admonishing: / happiness, how changeable you are!"