During the Second Empire , artists who were not supported by the Académie royale de peinture et de sculpture or by current political constellations had little opportunity to publish their works and thus to become recognized artists.

The number of works rejected by the Paris Salon increased steadily. In response to these circumstances, the artists began to organize themselves, so that finally in 1884 the group of independent artists , authorized by the Ministry of Fine Arts, was given the opportunity to open an exhibition for which the city of Paris made the premises available .

Between May 15 and July 15, the first “free” exhibition of contemporary art was able to show more than 5000 exhibits by over 400 artists. 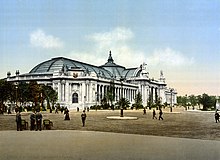 The association, which was founded shortly afterwards on July 29, 1884, rejects juries and awards in its statute, and is anxious to allow the public to evaluate the works of art themselves.

In 1910, a painting by an Italian named Joachim-Raphaël Boronali entitled Sunset over the Adriatic was exhibited in the salon - a landscape with confused lines. The journalist Roland Dorgelès , one of the initiators of the action, later admitted that the painting had been produced by a donkey's tail. A collector bought the work for four hundred francs. The debate in the showroom and the press reports are said to have fluctuated between rejection and enthusiasm. The details can no longer be determined today. It was an attack on the entire avant-garde. The case therefore kept the art world busy for years and decades to come. Two years later, in 1912, an exhibition called Donkey's Tail opened in Moscow .

Since 1920, the association received the Grand Palais for the salon's exhibitions. It was recognized as a non-profit organization on March 30, 1923.

The association, which is still active today, organizes various exhibitions every year.