Robert Victor Félix Delaunay (* 12. April 1885 in Paris ; † 25. October 1941 in Montpellier ) is a French was a painter of the avant-garde , who is also art-theoretical writings authored. After starting out as a self-taught painter in the style of Neo-Impressionism , he found his own style in Orphic Cubism , also known as Orphism, the main representative of which he is considered to be. The term orphism was coined by Guillaume Apollinaire in 1912 for Delaunay's window paintings , Fenêtres . In the 1930s Delaunay continued his work after a long break on the abstract circular shapes in the series Rythmes , which took up the themes of the circular shape and the disk from 1913 again. His wife, Sonia Delaunay , was also a painter and designer and worked with him in artistic exchange. 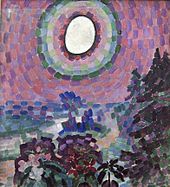 Robert Delaunay was the son of the businessman Georges Delaunay and the Countess Berthe-Félice de Rose. The parents divorced in 1889 and Robert was taken in by his mother's older sister, Marie, and her husband, Charles Damour, at their country estate near Bourges and hardly saw his parents. Delaunay left high school due to poor performance and completed an apprenticeship in stage and decorative painting at the Ronsin stage design workshop in Belleville from 1902 to 1904 . In 1903 he began to paint in Brittany, had a connection with the group of Pont-Aven , whereupon he began to paint neo-impressionist sea ​​views “in front of the motif”. From 1904 his paintings were included in exhibitions: that year and 1906 in the Salon d'Automne and from 1904 to 1914 in the Salon des Indépendants . In 1905 he visited the Fauves ' room in the Salon d'Automne , whose style inspired him to create colorful pictures. Between 1905 and 1907 he made friends with Jean Metzinger and Henri Rousseau and studied the color theories of Michel-Eugène Chevreul . He also dealt with the work of Paul Cézanne . From 1907 he served in the military as a librarian in Laon and was written in 1908 because of “cardiac dysfunction”. He returned to Paris and saw cubist works by Georges Braque and Pablo Picasso in the Kahnweiler gallery , whereupon he turned to cubism from around 1909 . The well-known Fenêtre (window) paintings, the main motif of which is the Eiffel Tower seen through a window and built from 1887 to 1889 , originated in 1909 and continued into the 1920s.

In 1908 Delaunay met the gallery owner Wilhelm Uhde's wife - the artist Sonia Uhde-Terk - and married her after their divorce from Uhde in 1910. The shared Parisian apartment 3 rue des Grands Augustins became a meeting place for numerous artists. In January 1911, their son, who later became jazz writer and producer Charles Delaunay , was born.

In that year Delaunay met Wassily Kandinsky through Elisabeth Epstein , who had lived in Paris since 1904 , and in the same year joined the painters in the editorial team of the Blauer Reiter . Their first exhibition took place in December 1911 in the modern gallery Heinrich Thannhauser in Munich; Delaunay was the most successful artist who was able to sell three out of four pictures on display. Among them was a painting from the Eiffel Tower series that Bernhard Koehler acquired. It is considered lost. A total of nine of the exhibited pictures found buyers in the gallery. Delaunay also brokered Henri Rousseau's pictures for the exhibition, some of which were in his possession. This was followed by exhibitions in the Sturm-Galerie in Berlin, in the Gereonsklub in Cologne and in the artists' association Karo-Bube in Moscow.

Coining of the term "Orphism" 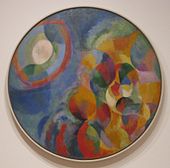 From 1912 Delaunay turned to pure color painting, and he created some of the synchromy works characterized by circular shapes . In February and March of that year he had his first solo exhibition at the Barbazanges gallery in Paris , where works by Marie Laurencin were also shown. On April 11, Paul Klee visited Delaunay in his Paris studio. In December of that year Klee received Delaunay's essay On Light ( La Lumière ) for translation for Herwarth Walden's art magazine Der Sturm in Berlin , which Franz Marc had brought for him from Paris and which appeared in the art magazine in January of the following year. Klee's work was subsequently shaped by Delaunay's window paintings. Towards the end of the year, the writer Guillaume Apollinaire paid a visit to Delaunays and created the term “ orphism ” in view of the artist's window paintings. It describes a group of works that tend towards the non-representational, abstract . Delaunay himself rejected the term “Orphism” because of the lyrical component that resonated with Apollinaire, especially since he wanted his painting to be called “Cubisme écartelé (divided cubism)”.

Two of his paintings were shown on the Armory Show in New York in early 1913, and a third, La Ville de Paris , was rejected by Arthur B. Davies because of oversize . The painter Samuel Halpert , on behalf of Delaunay, requested that all of his pictures be suspended , but Les Fenêtres sur la ville (Window on the City, No. 4) and Route de Laon remained . But they no longer took part in the sequel to the Armory Show in Chicago. In September 1913 Delaunay and his wife took part in the exhibition of the First German Autumn Salon in Berlin. Delaunay was represented with 21 paintings, his wife exhibited 25 works, mainly painted book covers.

Stay in Spain and Portugal

When war broke out in 1914, the Delaunay couple stayed in Spain and decided not to return to France. Her residence was in Hondarribia , Spain, from 1915 to 1917 in Vila do Conde , Portugal . First called up, then declared a deserter , Delaunay was written unfit for war on June 3, 1916 in the French consulate in Vigo, Spain . In 1917 the couple lived in Madrid and Barcelona . They became friends with Sergei Djagilev , Léonide Massine , Diego Rivera and Igor Stravinski . The following year Delaunay designed the décor for the ballet Cléopâtre for the Ballets Russes , directed by Djagilev . His wife was in charge of the costumes. In 1919 the couple had a joint exhibition in the "Asociaciòn de Artistas Vascos" in Bilbao . French fashion designer Paul Poiret refused to partner with Sonia Delaunay in 1920, citing one reason she was married to a deserter. During this time, motifs from the Iberian Peninsula and the artist's only nude paintings such as Femme nue lisant were created .

Plaque on the house of the Delaunay couple in Paris, 16 rue de Saint-Simon (from 1935)

After the First World War, the couple returned to Paris in 1921 and moved into an apartment on 19th Boulevard Malesherbes Delaunay made contact with the still young circle of Dadaists and later Surrealists such as André Breton , Louis Aragon and the Dada poet Tristan Tzara , who he portrayed. In 1922 his work was exhibited at the Paul Guillaume Gallery and he began his second series with depictions of the Eiffel Tower. In 1924 his runner pictures followed, and in 1925 he created frescoes for the Palais de l'Ambassade de France for the Exposition Internationale des arts décoratifs in Paris. From 1929 he stayed in Brittany with Hans Arp , Sophie Taeuber-Arp and Tristan Tzara .

From the beginning of the 1930s, after a long break, he continued his work on abstract circular shapes. The series Rythmes was created , which takes up the themes of the 1913 disk and the circular shape. In 1931 he joined the group Abstraction-Création with his wife . For the Paris World's Fair in 1937, he made decorations for the Palais de l'Aéronautique and the Pavillon des Chemins de Fer. For the pavilion he painted a canvas picture with the large format 10 × 15 m, entitled Air, Iron and Water, which is part of the collection of the Center Georges Pompidou . His last work in 1938 was the creation of decorations for the sculpture hall of the Salon des Tuileries .

In 1940, the Delaunay couple moved to Auvergne due to the German occupation of France and to Mougins in southern France in winter . Robert Delaunay died of cancer the following year in Montpellier . In 1952 his grave was moved to the Gambais cemetery near Paris, where the Delaunays owned a farm; Sonia Delaunay was buried there in 1979 at her husband's side.

Especially Delaunay's wife Sonia and the American Patrick Henry Bruce , a student of Henri Matisse , were influenced by Orphism in their work. In addition, works by Marc Chagall , Raymond Duchamp-Villon and the Section d'Or are said to have been inspired by Orphism.

In addition, Delaunay's work was of central importance to the German expressionist painters Franz Marc and August Macke . They only met in person twice; in October 1912 they visited Delaunay in Paris, and in September 1913 they exhibited together at the First German Autumn Salon . The colored facets of the window pictures as well as the Formes Circulaires , color circles arranged in geometrical flat structures, inspired Marc and Macke to create abstract compositions. Paul Klee was also shaped by the window pictures .

Under the title Paris Visions , the Berlin Museum Deutsche Guggenheim showed Robert Delaunay's series for its opening in 1997. In 1999, on loan from the Center Georges Pompidou in Paris , which owns an extensive ensemble of works through donations from Sonia and Charles Delaunay , the artist couple was honored with a joint exhibition of their works, which was presented by the Hamburger Kunsthalle under the title Robert Delaunay - Sonia Delaunay: The Center Pompidou was shown as a guest in Hamburg .

The city of Paris named a street, Rue Robert et Sonia Delaunay, after the couple, and in Versailles , Rue Delaunay was named after the artist.

In 1912 Delaunay had more than ten paintings by Rousseau in "his small dining room" ( Herwarth Walden ) , including Quai Henry IV , 1909