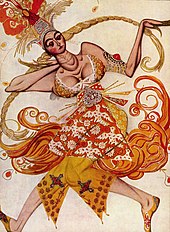 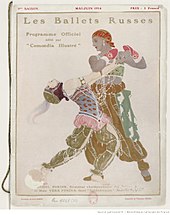 The Ballets Russes [ balɛʀys ] are considered to be one of the most important ballet ensembles of the 20th century. They were founded in 1909 by the Russian impresario Sergei Djagilew and initially worked under his direction in Paris, where they made an inspiring first appearance on May 19, 1909. In 1911 the company took its seat in Monte Carlo. Dyagilev's goal was to make Russian art known in Europe. He followed the principle of L'art pour l'art , i.e. art for its own sake, without any sought-after reference to the political reality of its time.

The company's choreographers such as Michel Fokine , Léonide Massine and George Balanchine laid the foundations for modern ballet , while dancers such as Vaslav Nijinsky and Anna Pawlowa became international stars of the ballet scene. After Dyagilev's death in 1929, the company was disbanded. The Ballets Russes de Monte Carlo was formed as the successor company .

Djagilev had already arranged a large exhibition of Russian art in the Grand Palais in 1906 and a series of concerts with Russian compositions at the Paris Opera in 1907. In 1909 he presented various ballets by Michel Fokine at the Théâtre du Châtelet in Paris , including Le Pavillon d'Armide , Le Festin , Les Sylphides and Cléopâtre . The pieces were danced by famous ballet stars of the St. Petersburg Mariinsky Theater such as Tamara Karsawina , Vaslav Nijinsky and Anna Pawlowa.

In 1910 Djagilew founded a permanent theater company with dancers from Saint Petersburg and Moscow , which was based in Saint Petersburg until 1914. On their tours, the Ballets Russes quickly achieved world fame with Michel Fokine's naturalism- inspired choreographies. Pieces such as L'Oiseau de Feu and Petrushka based on the music of Igor Stravinsky were part of the repertoire of several tours in the period that followed.

Famous stage and costume designers of the Ballets Russes were Léon Bakst , who was inspired by Art Nouveau , and Alexandre Benoîs, who was more inclined to classical balance . With their entire performance aesthetic, the Ballets Russes were under the influence of Russian symbolism. The mechanistic art tendencies after the turn of the century were countered here with a luxurious, luxurious style oriented towards the expression of emotion.

Vaslav Nijinsky's choreography for Le Sacre du Printemps, on the other hand, which was created for the Ballets Russes in 1913, already pointed far beyond this framework. It caused a scandal among audiences used to the movements of classical ballet or narrative ballets of the 18th century. With its geometric-abstract dance figures, this choreography is generally considered to be the beginning of modern ballet. Nijinsky's choreography to L'Après-midi d'un faune based on the music of Claude Debussy also set new standards with the directness of the presentation.

In 1914 Dyagilev turned away from the Saint Petersburg School and began to promote cooperation with visual artists - ballets were created with a strong emphasis on the stage design . Léonide Massine's works such as Parade from 1917 are clearly influenced by this: Jean Cocteau , Eric Satie and Pablo Picasso created the libretto, music and stage design for this. At Zéphyr et Flora , Vladimir Dukelsky (Vernon Duke) was responsible for the music and Georges Braque for the stage design.

With Bronislava Nijinska , Nijinsky’s sister, and George Balanchine as choreographers, neoclassical trends made themselves felt in the ensemble by 1922 at the latest. Balanchine endeavored to achieve the greatest possible unity of music and dance and avoided any dramatic action. His Apollon musagète from 1928 is considered to be style-forming.

The Ballets Russes were an influential cultural phenomenon in their day that made fashion. The star cult around the great dancer Nijinsky, the often exotic-erotic ballet acts and the sensual-fantastic costumes kept the public imagination very busy. Every evening at the theater was a sold out event, the women dressed “à l'orientale”, with turbans, feathers and darkly made-up complexions, and people went out to admire the “god of dance”, Vaslav Nijinsky.

In artistic work, the Ballets Russes exerted a direct influence on the American Ballet Theater and the company of the New York City Ballet , where Balanchine continued his work.