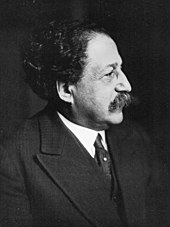 After studying violin at the Paris Conservatory , Pierre Monteux first worked as a violinist in the Folies Bergère and as a violist in the Geloso Quartet, playing Brahms , who later became one of his favorite composers. For 17 years he was first violist in the Orchester des Concerts Colonne in Paris. He gained his first experience as a conductor in particular in the casino orchestra in Dieppe. Monteux took part in the First World War until 1917 , was released because of the participation in a US tour of the Ballets Russes . He caught Dyagilev and Stravinsky and directed the world premieres of Stravinski's ballets Petrushka and Le sacre du printemps . With the latter there were tumultuous riots in the audience; Monteux conducted the performance in stoic calm and became famous from then on. As a result, he received an engagement at the Metropolitan Opera for the French repertoire, he was chief conductor of the orchestras in Boston (1919-1924), the Concertgebouw Orchestra Amsterdam (1924-1934, as 2nd conductor, next to Mengelberg ), Paris (1929 –1938), San Francisco (1937–1952) and London (from 1961). He also worked at the Metropolitan Opera from 1917 to 1919 and 1953 to 1956.

As a popular guest conductor he performed a. a. with the Vienna Philharmonic . His record companies let him record works by French and Russian composers in particular. He himself preferred Beethoven , Brahms and Wagner . His 1961 Chicago recording of the symphony in D minor by César Franck is considered an unrivaled reference recording . His recordings of Ravel's Daphnis et Chloé , Elgar's Enigma Variations , Tchaikovsky's Swan Lake and Jules Massenet's opera Manon are also outstanding . As early as 1932 Monteux began to organize courses for prospective conductors. In Paris in 1934 he founded the École Monteux conducting school , which still exists today , which he moved to his retirement home in Hancock in 1943. His students include André Previn , Neville Marriner , Anshel Brusilow , David Zinman and Erich Kunzel . Under Monteux, works by Debussy, Ravel, Poulenc and Antheil were premiered alongside the works by Stravinsky.

He was married three times and is the father of the flautist and conductor Claude Monteux. His great-grandson Kirk Monteux , born in Germany in 1965 , classical guitarist and music producer, continues the musical tradition of his family with the artistic possibilities of modern composition techniques.

Pierre Monteux was buried in the Riverside Cemetery in Hancock (Maine) .