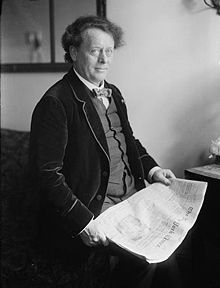 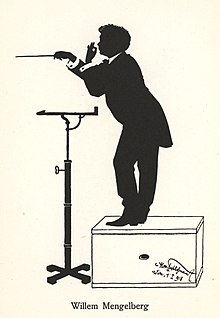 Silhouette of Mengelberg (1918) by Hans Schliessmann

Mengelberg's parents Friedrich Wilhelm Mengelberg and Helena Schrattenholz were German and in 1869, two years before he was born, moved from Cologne to Utrecht , where they founded a studio for the manufacture of church furniture and altar items. Mengelberg was the fourth child and had 15 siblings. He studied with Richard Hol in Utrecht, then u. a. with Franz Wüllner piano and composition at the Cologne University of Music . His first appearance as a conductor was with the Gürzenich Orchestra there . In 1892 he became general music director in Lucerne . In 1895 he succeeded Willem Kes , who at that time took up a position with the Scottish Orchestra that was considered to be better, and headed the Concertgebouw Orchestra in Amsterdam . From 1907 to 1920 he also took a job as a conductor of the Frankfurt Museum Orchestra . Mengelberg then also worked in the USA, from 1921 to 1930 as music director of the New York Philharmonic and thus as a rival of Arturo Toscanini , who had also conducted this orchestra since 1926. Mengelberg gave up the position after the orchestra began to split into a Toscanini and a Mengelberg camp due to fundamental differences with Toscanini. In addition, he was required to change programs more frequently, for which Mengelberg, who rehearsed extensively and also made long explanations about the composer during rehearsals, did not consider the rehearsal time to be sufficient.

Mengelberg, who made the Concertgebouw Orchestra one of the most virtuoso orchestras in the world, received numerous honors in the Netherlands. He was made Knight of the Order of Orange-Nassau in 1898 , its officer in 1902, and Knight of the Order of the Dutch Lion in 1907 . He also received the silver medal in 1907 and the gold medal in the arts and sciences in 1913 in the House Order of Orange . In 1920 he became Commander , in 1934 Grand Commander of the Order of Orange-Nassau. In 1934 he also received an extraordinary professorship in musicology at the State University of Utrecht . Portraits of Mengelberg were created by the artists Pier Pander , Jan Toorop , Jan Sluijters and Kees van Dongen .

At the beginning of July 1940, its star sank in the Netherlands after an interview with the Völkischer Beobachter was reprinted in De Telegraaf , as well as a further interview in August 1940 with Telegraaf, which was interpreted as derogatory to Dutch musical life, and a series of photos, who made him in Berlin, u. a. in front of a concert poster with the Berliner Philharmoniker . Mengelberg cooperated with the Germans during the occupation from 1940 to 1945 and gave concerts for leading National Socialists such as Arthur Seyß-Inquart , which earned him international criticism. Mengelberg justified his international activities with the comparison that just as the sun shines for everyone, music is there for all peoples. In autumn 1940 he led the first symphony by Gustav Mahler on. He also negotiated for Jews and Dutch citizens ( Carl Flesch , the flautist Hubert Barwahser, Ernst Laqueur , the pianist Sara Bosmans-Benedicts and many others) with the German occupation authorities. Because of the 70th to Mengelberg's Birthday issued a statement to the German press, to celebrate the birthday with a certain aloofness in 1941, as Mengelberg be used "his life for Gustav Mahler [has] , expressed in Munich disparagingly of Germany [has] and today (1941) 12 Jews are employed in his orchestra ” . 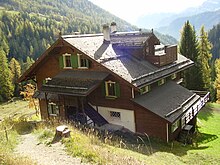 Mengelberg's residence in Zuort , Switzerland. A Mengelberg foundation offered this villa to young musicians until 2009.

In 1945, as part of the denazification process, Mengelberg was initially banned from appearing in the Netherlands for a period of six years after the appointment negotiations in 1947. His passport was confiscated and his honors were revoked. Mengelberg did not understand these measures. He alleged that his entire activity in 50 years of his career had only served the benefit of the Netherlands, the city of Amsterdam and the Concertgebouw orchestra and that he had mistakenly believed that this was also understood in public. In 1946 he wrote to Ellie Bysterus Heemskerk (a violinist in the Concertgebouw Orchestra): “If I had done something, I would understand, but I was never involved in anything.” In his exile in Zuort , Switzerland, he received until 1949 nor the boarding house of the Concertgebouw orchestra, until the city council of Amsterdam canceled this too. Mengelberg died two months before the end of the shortened performance ban.

After Mengelberg's death Otto Klemperer conducted a memorial concert for him. Klemperer admired Mengelberg more as a musical or orchestral trainer than as a conductor. A congratulatory telegram that Mengelberg is said to have sent to Hitler described Klemperer as "stupid". He found his final resting place in the Friedental cemetery .

Mengelberg, who was influenced by his composition and conducting teacher Wüllner, was an avid supporter of Richard Strauss , whose symphonic poem Ein Heldenleben is dedicated to him and the Concertgebouw orchestra. Among the composers he preferred not only Strauss and Beethoven . He also helped the work of Schönberg , Pijper , Hindemith , Reger and Diepenbrock to gain recognition, in part through Dutch premieres.

In 1899 he founded annual performances of Bach's St. Matthew Passion on Palm Sunday and an annual Beethoven cycle and also dedicated numerous music festivals to artists such as Mahler and Strauss.

He was friends with Mahler, whose music he had got to know in 1903. He supported him by performing his works in the Netherlands. A highlight was the Mahler Festival in Amsterdam for Willem Mengelberg's 25th anniversary as a conductor in 1920. Mengelberg had studied Mahler's symphonies with the composer himself and annotated the scores bar by bar. Mengelberg's recording of Mahler's 4th Symphony is therefore considered to be particularly close to the composer's intentions.

In 1960, Mengelberg's recordings from 1939 to 1940 were the first complete edition of Beethoven's symphonies. Mengelberg emerges as a conservative sound artist, snappy, but also (for example in the 6th symphony) sensitive, yes, playful to the point of irony.

Altogether Mengelberg recorded about 90 works commercially for a number of record companies, as well as about 40 more for the Dutch radio.