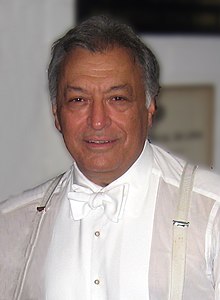 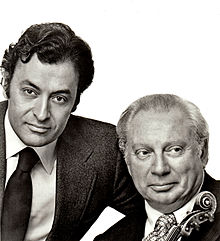 Mehta comes from the ethnic group of parsing . He grew up in a wealthy Zoroastrian family of musicians in Central India and has a younger brother. At the age of seven he received his first violin and piano lessons and became familiar with European classical music at an early age. During the first to fifth school year (1942–1946) he attended the private "Campion School" Bombay under the direction of Jesuit priests. His only sporting interest was cricket . In 1947, Mehta entered St. Mary's High School in Mumbai , where he graduated from college four years later.

As a pupil of his father Mehli Mehta, a violin virtuoso who spent many years in the USA, he conducted the Bombay Symphony Orchestra for the first time at the age of 16. At the request of his parents, he began to study medicine at St. Xavier's College of the University of Mumbai . After two semesters, however, he concentrated entirely on music. At the age of 18 he came to Vienna and studied piano , composition and double bass at the Vienna Music Academy . He trained as a conductor with Hans Swarowsky .

In 1958 he won the Liverpool International Conducting Competition, where he became deputy conductor. In his mid-twenties he had already conducted the Vienna and Berlin Philharmonic , with which he is still associated today. In the USA he took second place in the competition in Tanglewood / Massachusetts. At this time he also met the conductor of the Boston Symphony Orchestra , Charles Münch , who had a great influence on his further career. In 1960 Mehta made his debut with the New York Philharmonic Orchestra , the Philadelphia Orchestra and the Orchester symphonique de Montréal , of which he was director from 1962 to 1966.

Mehta worked as an opera conductor in Montréal, at the Metropolitan Opera in New York, at the Vienna State Opera , at the State Opera Unter den Linden Berlin, at the Bavarian State Opera , at the London Royal Opera House Covent Garden, at La Scala in Milan and at the opera houses of Montréal , Chicago, Berlin (Deutsche Oper) and Florence as well as at the Salzburg Festival . With Turandot in the Forbidden City and Tosca in Rome, he performed two major opera projects in original locations.

From September 1998 to 2006 Mehta was general music director at the Bavarian State Opera.

Mehta has been married to actress Nancy Kovack since July 19, 1969 . From her first marriage to Carmen Lasky, there are two adult children. His son Mervon Mehta is the Vice President of the Kimmel Center in Philadelphia.

His father Mehli Mehta was a prominent concert violinist, violin teacher and conductor who founded the Bombay Symphony Orchestra and a string quartet.

His cousin Dady Mehta is a pianist, his son Bejun Mehta is a world-famous countertenor .

Mehta at the presentation of the Kennedy Prize 2006 with other winners ( Smokey Robinson , Andrew Lloyd Webber , Dolly Parton , Steven Spielberg ), US President George W. Bush with his wife (center)