This article deals with the house of the Wiener Musikverein, for the association see Gesellschaft der Musikfreunde in Wien . 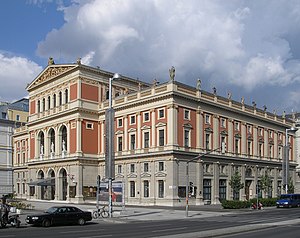 Portal of the music club building 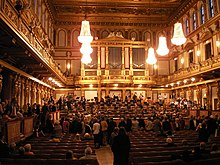 In 1812 the Gesellschaft der Musikfreunde was founded in Vienna by Joseph Sonnleithner . From November 1831 she organized concerts in a hall at Tuchlauben No. 12, which soon proved to be too small with only 700 seats.

1863 agreed Emperor Franz Joseph the proposal the Ministry of Interior for the new Ringstrasse zone competent urban expansion funds to the company, which belongs to the state area at the Wien River next to the construction site of the artists' house , across from the St. Charles Church, to no cost for a concert building.

The classical architect Theophil von Hansen was commissioned with the planning . There were to be two halls, a large one for orchestra and a smaller one for chamber music concerts. All stone carving was carried out by the Viennese company Anton Wasserburger ; According to their properties, but also their availability, sandstones from Breitenbrunn and St. Margarethen , hard limestone from Kaisersteinbruch on the Leithagebirge and Wöllersdorf were used.

The house was opened on January 6, 1870 with a solemn concert, and the critics immediately unanimously praised the grandiose acoustics of the Great Hall, the fame of which spread throughout the world in a short time. The small hall, which was named after Johannes Brahms in 1937 , soon received the reputation of being an ideal place for chamber music.

In 2004, four smaller, underground halls were opened, designed for concerts as well as rehearsals, conferences, workshops or receptions and equipped with the latest technology for the greatest possible flexibility in use. Originally, this expansion should have been financed by the American music patron Alberto Vilar . After this jumped off, the Austro - Canadian industrialist Frank Stronach helped out.

The music association is built in the historicizing style based on models from ancient Greece : columns , caryatids and gables - reliefs allow the association that a temple for music was built here.

The large hall has a ceiling painting by August Eisenmenger and sculptures by Franz Melnitzky , the small one was only restored to its original form in 1993 with red columns and green marble walls . Usually 1744 seats and 300 standing places are available.

The four new halls in an underground extension below the forecourt were planned by the architect Wilhelm Holzbauer and named after the dominant basic building material glass , metal , stone and wood .

The Great Hall (often referred to as the "golden hall") is considered one of the best concert halls in the world. The reasons for the excellent quality of the acoustics are numerous and partly unintentional coincidences: Hansen had to rely on his intuition , since scientific studies on room acoustics were only carried out in the 20th century.

The Great Hall meets all the requirements for a good concert hall: ideal proportions of the room, sufficiently large room volume, not too many seats, many sound-dispersing surfaces such as boxes , balconies and sculptures , no sound-absorbing surfaces other than the audience. A key aspect of the acoustics is the reverberation time , which is two seconds.

With its cuboid shape (the “ shoebox principle ”), the Great Hall provides the audience with the early reflections from the sides, which are now recognized as important . Other famous halls with excellent acoustics were also built between 1870 and 1900 as shoe boxes with many sound-dispersing surfaces:

The organ's prospectus is the background and trademark of the concert hall at all events , although the visible pipes, made by Friedrich Ladegast , do not sound. Theophil Hansen designed the distinctive case with the silent prospect pipes for an instrument that Aristide Cavaillé-Coll was originally supposed to have built, but for political reasons it did not come about (→ Franco-German War ). The company J. Merklin-Schütze et Cie., Also invited to submit an offer . didn't even respond. Instead of the Parisian companies, the then most important German organ builder, Friedrich Ladegast, planned an organ with 44 registers on 3 manuals and a pedal . After the intervention of the organ building commission of the Musikverein, to which Anton Bruckner also belonged, he expanded the disposition to 52 registers and built the mechanism into the case in 1872 .

It was equipped with a mechanical action and had grinding chests in the manual works and cone chests in the pedal works . Ladegast had remained a staunch supporter of the sliding box, on January 13, 1880 he wrote a letter to Leopold Alexander cells, the general secretary of the Vienna Society of Music Friends, with the following lines, which have become proverbial: […] From the previous years The works delivered were two with a cone shop. In many respects, the same are easier to manufacture than slider chests (but to be honest!) The slider chests will not be displaced by the cones. However, since almost everything is crazy, it doesn't help, you have to - cry!
The organ sounded on November 10, 1872 in Handel's “Dettinger Te Deum”, whose continuo accompaniment was arranged for organ by Johannes Brahms, under whose direction as an accompanying instrument for the first time in a concert. At the opening concert on November 15, 1872, the focus was on Anton Bruckner as an improviser, Carl August Fischer from Dresden impressed with Liszt's  " Fantasy and Fugue on BACH ".

The Ladegast organ was equipped with numerous playing aids and complicated mechanics. When these became prone to failure and failed more and more, the parties involved decided to build a new building by the Rieger company from Jägerndorf ( Silesia ). The Rieger Opus 1400 had 71 stops and was presented to the public on December 11, 1907 at a concert. The electro-pneumatic particularly liked instrument Franz Schmidt why he heranzog it for some of his premieres. The Rieger organ was also valued by high-ranking concert organists such as Marcel Dupré , even after a disadvantageous change in disposition and the installation of an electric action by the Viennese company Molzer in 1948 .

Despite fierce disputes in the professional world, this instrument was made by EF Walcker & Cie. In 1967/69 by a 100-stop work that can be played on 4 manuals and pedal . ( Ludwigsburg ) and Werner Walcker-Mayer ( Guntramsdorf ) replaced. The driving force was Karl Richter , who also developed the layout of the new organ. In order to accommodate the many registers, the substructure of the housing was also included and positioned behind slatted registers. This new building was, however, categorically rejected by important organists, mainly because of its implementation with an electric action; a mechanical action was required. The organ's baroque tonal language, which opposed the reproduction of symphonic organ literature - predestined for concert hall organs - also gave rise to dissatisfaction.

Due to ongoing criticism and major damage to the Walcker organ , an organ committee was founded in 2005, in which Dame Gillian Weir , Ludger Lohmann , Olivier Latry , Peter Planyavsky , Martin Haselböck , Otto Biba and Thomas Mittermayer were represented. They developed a concept for a new concert hall organ , the major order for this received the Rieger Orgelbau company , which has been based in Vorarlberg since 1946 , the installation of the instrument in the historic case lasted until the beginning of 2011. In the course of this work, the substructure of the case with its decorations was also completed Reconstructed, there are no more registers in it. The Rieger organ has 86 stops on 4 manuals and a pedal.

"Golden Hall", around two hours after the end of the 2015 New Year's Concert

Podium or front of the Brahms Hall

A world-famous event in the Wiener Musikverein is the annual New Year's Concert by the Vienna Philharmonic . In 1924, the orchestra held its first Philharmonic Ball here , which is considered one of the most prestigious Viennese balls. From 2006 to 2014 the annual national holiday concert also took place here.

The underground station Karlsplatz , which connects the lines U1, U2 and U4, is located directly next to the Musikverein . With the above-ground tram lines 1 and 62 and other lines on the Ringstrasse , which is only one block away , it is one of the busiest transport hubs in Vienna. In 2011 the forecourt between the Künstlerhaus and the Musikverein was named after the institution as the Musikvereinsplatz .

The wooden hall is not intended as a concert hall and is therefore not included in this list.