The range of the pedal nowadays ranges from 13 to 32 keys (up to about 2½ octaves, also chromatically from C), in exceptional cases from A 1 to C 2 (3 octaves) for very large organs . In the past, the pedal was often only made up to c 1 or d 1 or even shorter. As a rule, every organ has a pedal and one or more manuals. A small organ without (or with only attached) a pedal is called a positive . Very rarely are organs with two pedal keyboards to be found. In electronic organs , so-called “stub pedals” are also used, which are much smaller in size and only cover an octave. "Stubby pedals" can also be found on baroque organs, for example on the Iberian Peninsula or in southern Germany. Their range is one to one and a half octaves.

There are different types of construction, a distinction is first made between "parallel pedal", in which all keys are parallel to one another, and "radial pedal", in which the keys diverge in a star shape from the organ bench. The pedal can also be curved in the horizontal direction with higher keys on the edge or vertically with longer upper keys on the edge to make it easier for the organist to reach the pedal keys near the edge. A pedal constructed in this way is called "simply curved". If horizontal and vertical curves are combined, the pedal is called "double curve". 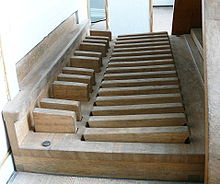 Block pedal of the late baroque Holzhey organ in Weißenau

The so-called "knife back pedal" of the Ev.-Ref. Stapelmoor Church

With a block pedal, the keys are not visible in full length as in modern pedal keyboards, but protrude as "blocks" from the cover plate of the pedal keyboard. The so-called "knife back pedal" on French baroque organs is constructed in a similar way.

Stump pedal of a Hammond organ

In the minimal version of a pedal keyboard, the “stub pedal”, keys 10 to 25 cm long protrude from the housing and can be played with the tips of your feet. Virtuoso pedal play in the classic sense is only possible to a limited extent. Such pedals, they are built on pipe organs, are usually only attached to the manual, often in the simplest possible way with a cloth band or a string. Examples of pedals of smaller size can be found mainly in Italy and Spain , but also in the Alpine region. Many pedals on electronic organs are built as stub pedals , they are used here for playing bass lines such as a walking bass .

This design does not have the usual elongated pedal buttons, but round buttons. It is more reminiscent of the keyboard of an oversized simple button accordion .

An "attached pedal" is a pedal that does not have its own register . The pedal is then permanently linked to the usually only manual and cannot be registered independently.

In organs in which the pedal has only very few registers compared to the manuals, usually only one or two registers of 16 'and 8', the term "dependent pedal" is also in use, since a pedal coupler is often required here . Infrequent pedals can be found in many small organs, where they only have their own register, usually a subset 16 ′ or a subbass 16 ′. Standard are dependent pedals in baroque organs on the Iberian Peninsula. These pedals, often designed as stump pedals or plug pedals, usually only have their own register “Contras”, whereby in many cases it is a wooden 16 'or wooden 16' + 8 '. The demarcation from the independent pedal is sometimes difficult. The pedal works of smaller French baroque organs almost consistently only have their own three registers Soubasse 16 ′ (closed), Flûte 8 ′ (broadly mesured principal) and Trompette 8 ′ (full-length metal beaker), but the pedal coupler is used in the relevant literature rather seldom. 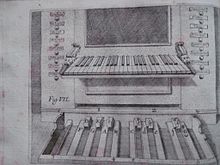 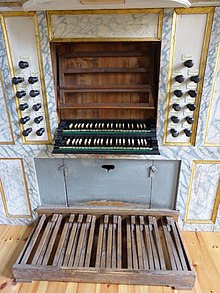 A pedal with a short octave is often found on historical organs well into the 19th century : As a rule, the lowest four pedal keys (C, C sharp, D and D flat) are not used. In the case of the real tones in the course of the octave, the tones C sharp / D flat, D flat / E flat, F sharp / G flat and G sharp / A flat, which are hardly used in early music, are left out, which resulted in significant material and thus cost savings.

Special form of the major octave; without cis

Since the C sharp is hardly used in a baroque style organ - Johann Sebastian Bach z. B. used it in only six compositions in his entire organ work - as a special form of a short octave, it is sometimes not built:

Pedal play can be done with the tips as well as the heels of both feet. There is also the rolling technique, in which the foot is rolled over the ball of the "big toe" to the ball of the "little toe". This means that up to four voices can theoretically be played. In practice, however, one-part pedaling is common, and two-part pedaling is seldom found. An important means is putting a foot in front or behind, and sliding from key to key is also used. Like the fingering, the footing can be entered in the sheet music with special characters, which are not, however, used in the same way by all organists. Up until the 19th century, many organists preferred to play with the tip, often because of the design of the pedal buttons, which did not allow the hoe to be used properly. The Germani technique (after Fernando Germani ) equates point and heel.

This technique is difficult to implement with today's shoe fashion. Therefore, many organists use separate shoes for playing. Dance shoes in particular are particularly suitable for virtuoso play due to their narrow and seamless cut, suede sole and heel . But narrow-cut shoes with a heel and leather soles are also suitable for playing with this technique. Some contemporary organists, such as Willem Tanke and Helmut Kickton , practice pedaling without shoes, only with socks.