Belzig is a redirect to this article. For information on people, see Von Belzig . 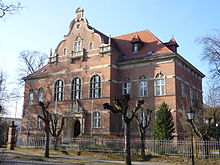 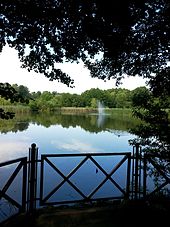 Bad Belzig [ baːt ˈbɛlt͜sɪç ], until 2010 Belzig , is the district town of the Potsdam-Mittelmark district in the state of Brandenburg . Bad Belzig is a member of the “Cities with Historic Town Centers” working group of the state of Brandenburg. Since December 5th, 2009 Bad Belzig has been able to call itself an officially state-recognized thermal saltwater spa . On March 1, 2010 the change of the name from Belzig to Bad Belzig became legally effective. The urban area is identical to the Belzig office, which existed from 1992 to 2003 .

The city is located within the Hoher Fläming Nature Park and has one of the highest elevations in the North German lowlands with the Hagelberg (200 m) within the city area . Around three kilometers down the valley along the Belziger / Fredersdorfer Bach, the Belziger landscape meadows begin in the Fredersdorf district , forming a flat, low-vegetation landscape in the Baruther glacial valley . The settlement-free area of around 7,600  hectares is part of the Hoher Fläming Nature Park and has been designated as a nature reserve since July 1, 2005 with a portion of around 4,500 hectares . It is also one of the last refuges for the great bustard in Germany. The rivers in the city are the Temnitz and the Verlorenwasser . The tributary of the Temnitz is the Bullenberger Bach , the lost water is the Briesener Bach .

In today's urban area, north of the core city between Weitzgrund and Verlorenwasser, the geographical center of the GDR was .

The average annual precipitation is 607 mm. Precipitation varies only minimally and is evenly distributed over the year. Lower seasonal fluctuations are recorded at only four percent of the measuring stations in Brandenburg .

The city of Bad Belzig comprises the area of ​​the (core) city with the district of Weitzgrund and the areas of the 14 districts:

The core town of Bad Belzig is divided into four districts:

Belzig was first mentioned in a document in 997. After the death of Count Baderich , lord of Belzig (around 1251), the county passed to the Duchy of Saxony. In 1406 the Magdeburg bishops plundered the Belzig area, and the town and castle were also partially destroyed. Then the city was partially expanded and the castle rebuilt. From 1423 to 1815 Belzig belonged to the Belzig-Rabenstein office in the Saxon spa district. Martin Luther preached in St. Mary's Church in 1530 . The Lutherlinde, which was located in Belzig on the cemetery wall of the Gertraudenfriedhof, is said to be named after him. The city was partially destroyed again by Spanish troops during the Schmalkaldic War in 1547. About a hundred years later (1636), the town under the castle was again ravaged by the turmoil of war during the Thirty Years' War and almost completely destroyed by Swedish mercenaries. On June 6, 1665, Hedwig Rösemann was sentenced to death at the stake as a witch and executed. In 1702 Belzig received full city rights.

During the Wars of Liberation in 1813, the Battle of Hagelberg took place near Belzig . The decisions of the Congress of Vienna , the date to was Saxony belonging Belzig in 1815. Prussia awarded and 1,818 district seat of the Zauch-Belzig in the administrative district of Potsdam the province of Brandenburg .

The lung sanatorium (today a rehabilitation clinic ) was completed in 1900. Belzig was electrified in July 1909. The village of Sandberg below the castle to Jaegers Hintermühle (Kirchhofstraße) was incorporated in 1914. In 1934 the Roederhof ammunition factory was built. When the war began, there was also a forced labor camp south of Lübnitzer Strasse for 1,500 men and women, mainly from Eastern Europe. In 1943, a satellite camp of the Ravensbrück concentration camp was set up with 750 female prisoners who had to work in the local ammunition factory. The sick were brought back to Ravensbrück to be murdered. From 1939 to 1945 the city was the seat of the largest German radio station for wireless communication.

On the night of May 1, 1945, Mayor Otto Witte (NSDAP) fled west with his followers. Afterwards, under the direction of the teacher Arthur Krause, a decision was made to raise white flags and to disarm the HJ ler at a citizens' meeting of several hundred residents on May 2nd . On the night of May 3, the last soldiers of the Wehrmacht withdrew from the castle. The first Soviet soldiers reached the city during the day and moved on; Arthur Krause only managed to officially hand over the city to the Soviet commanders on May 4th.

From 1952 Belzig was the district town of the Belzig district in the newly formed GDR district of Potsdam . In April 1953 the city administration, which had previously been housed elsewhere, was able to move into the town hall again. In 1959 Weitzgrund became part of Belzig's municipality. In 1972 the town hall burned down due to negligence.

During the GDR era, the "Central School of the Society for Sport and Technology Etkar André" was located in Bad Belzig. There, full-time employees of the Central Enlightenment Administration (HVA) of the Ministry for State Security (MfS) were trained for activities in western countries. This also included the recruiting of female spies (“Romeo School”).

In the course of the formation of offices in the state of Brandenburg, 14 communities (Borne, Bergholz, Dippmannsdorf, Fredersdorf, Groß Briesen, Hagelberg, Kuhlowitz, Lübnitz, Lüsse, Lütte, Neschholz, Ragösen, Schwanebeck and the city of Belzig) from the then Belzig district joined an administrative community, the Amt Belzig . On June 24, 1992, the Minister of the Interior of the State of Brandenburg approved the establishment of the Belzig Office. June 30, 1992 was set as the date on which the office was established. The office had its seat in the city of Belzig (today Bad Belzig). On October 20, 1992, the municipality of Werbig was also assigned to the Belzig office. In 1993 three districts merged to form the Potsdam-Mittelmark district and Belzig district town. On December 31, 2002, the municipalities of Bergholz, Borne, Dippmannsdorf, Fredersdorf, Groß Briesen, Kuhlowitz, Lübnitz, Lüsse, Lütte, Neschholz, Ragösen and Werbig were incorporated into the town of Belzig. On October 23, 2003, the municipalities Hagelberg and Schwanebeck were finally incorporated into the city of Belzig by law and the Belzig office was dissolved. The municipality of Hagelberg lodged a municipal constitutional complaint with the constitutional court of the state of Brandenburg, which was partly rejected, the rest rejected. The city of Belzig became vacant. The former official municipalities are now districts of the city of Bad Belzig.

Belzig has been a state-approved climatic health resort since 1995 and the SteinTherme, which was opened in 2002 (reconstructed in 2009), is a thermal brine bath. The Hofgarten cinema was opened on May 18, 2005, and a bypass road east of the city on September 12, 2005. Belzig has been a state-approved spa since December 5th, 2009 . With effect from March 1, 2010, the city will be named Bad Belzig. 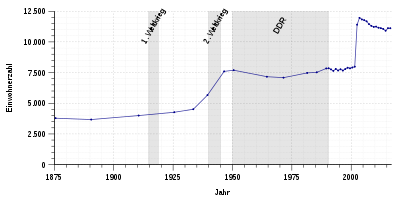 Population development of Bad Belzig from 1875 to 2016

The town council of Bad Belzig has 22 members and the full-time mayor. The local elections on May 26, 2019 led to the following result:

Blazon : “In blue a silver, round tower with two crenellated wreaths, between which a black cross is visible, with a gold knobbed green dome and with an open gate at the bottom right. Leaning to the right is a sign that is divided into nine black and gold parts and covered with a green diamond wreath diagonally to the right. "

Bad Belzig maintains a twinning relationship with the Lower Saxon community of Ritterhude in the Osterholz district . 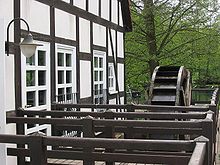 "Protection" by Gianfranco Mancini, Stones without Borders 2004, at the district hospital

Otherwise, craft and medium-sized companies shape the economic structure. With a few exceptions, retail is concentrated in the city of Bad Belzig. Super, discount and hardware stores are more likely to be found on the exit roads. Small-scale retail continues to shape the historic old town. In a few districts there are still small grocery stores, bakeries and butchers. Another important employer in the city is the Bad Belzig district hospital .

The Seedoche business park on the B 246 at the end of the town in the direction of Brück is the only one in town with around 17 hectares. The occupancy rate is still unsatisfactory (with approx. 7 ha). The technology and start-up center (TGZ) "Fläming", which has existed since 1993, is intended to bring new impulses to the region or keep them there in terms of business start-ups, employment and economic development.

The ZEGG (Center for Experimental Society), which settled in the north of the city in 1991, sees itself as an economic and social model project .

“Bad Belzig” was the goal of the urban development policy that has been promoted since 1990. Tourism and the development of gastronomy and the hotel industry are therefore playing an increasing role in the economy of the city and its surroundings. The "Eisenhardt" castle, the castle's local history museum, the SteinTherme and the spa gardens, the leisure center with outdoor pool in summer, the spa gardens and the rehabilitation clinic are the cornerstones of this infrastructure. A subsidiary of the city, Kur- und Freizeit GmbH, operates the SteinTherme. The tourist information on the market square has been operated by the city administration again since 2013 (previously Kur- und Freizeit GmbH). In 2012, the Fläming with Bad Belzig as the central location was the venue for the German Hiking Day . 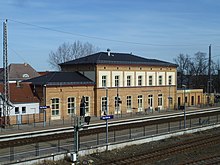 Bad Belzig is on the B 102 federal highway between Brandenburg an der Havel and Jüterbog and on the B 246 between Wiesenburg and Beelitz . The B 102 runs past the city as a bypass road. The nearest motorway junction (AS 5) is Niemegk on the A 9 (Berlin – Munich). It is located about nine kilometers to the southeast.

The Bad Belzig station is located on the railway line Berlin-Dessau . Regional Express trains on the RE 7 ( Airport Express ) line run every hour from Dessau via the Berlin Stadtbahn and Berlin-Schönefeld Airport station to Wünsdorf-Waldstadt .

Until 2003, the trains of the Brandenburg urban railway from Neustadt (Dosse) via Rathenow and Brandenburg an der Havel ended at a platform with its own reception building on the south side of the station. Until 1962 the passenger trains (after changing direction) continued to run to Treuenbrietzen .

Furthermore, Bad Belzig is a central hub for bus traffic in the southwest of the Potsdam-Mittelmark district. The Regiobus Potsdam-Mittelmark connects Bad Belzig with three PlusBus and other regional bus routes. The city has a bus station from which lines connect the small towns of the Hohen Fläming. There are hourly bus connections to Brandenburg an der Havel and Potsdam .

To the south of the district of Lüsse there is the Lüsse glider airfield and to the east of the village of Mörz (part of the municipality of Planetal ) there is a small sports airfield.

The Märkische Allgemeine , which is published in Potsdam, maintains the local editorial office “Fläming-Echo” responsible for the south-western district of Potsdam-Mittelmark in Bad Belzig.

In Weitz reason is a transmission tower of Deutsche Telekom . 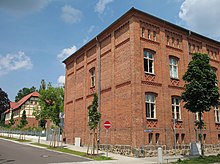 Cities and municipalities in the district of Potsdam-Mittelmark

Districts of the city of Bad Belzig