The title of this article is ambiguous. Further meanings are listed under Templin (disambiguation) .

Templin [tɛmˈpliːn] is the city with the largest area in the Uckermark district in the north of Brandenburg . Despite its only 16,000 inhabitants, it is the eighth largest city in Germany in terms of area .

Templin is located in the natural area of the Templiner Platte . The Schorfheide forest area extends to the south . 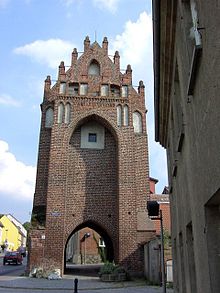 For the origin of the name “Templin”, the Germanic word “timpen”, “tempen” or “tempel” with the meaning of “pointed hill” is being considered, which means contact between Germanic (up to the 5th century) and Slavic settlers (from the 6th century) . Century). (Cf. Vom Fischer and his wife , a fairy tale that the Brothers Grimm collected from a spring near Templin: Mantje, Mantje, timpete , for example 'Mondchen, Mondchen, zippfelt', i.e. the crescent moon.) Another possible source is the Slavic word "tąpy" or "topy" meaning "blunt". In addition, the derivation from a personal name "Tąp-l-" comes into consideration.

The city was first mentioned in 1270 as "Templyn". In the document of October 2, 1270, the exchange of countries between the Ascanian margraves and the bishop Heinrich of Brandenburg was sealed. A document, first issued in Templin in 1287, indicates a visit by Margrave Otto IV . A document dated August 30, 1314 named Templin “ city ” for the first time ( Oppidum Templin - oppidum Latin: “city, small town”).

On November 25, 1317 the " Peace of Templin " was concluded after the Margrave War between a coalition of North German princes and the Margraviate of Brandenburg .

In 1320 a pastor was named for the first time as "master Conrad" von Templin in a document. In 1397 they joined the city alliance with Stralsund, Stettin, Pasewalk, Prenzlau and Strasburg in order to counteract the widespread gang system. In the "Peace of Prenzlau" in 1479 Templin finally came to Brandenburg. For the first time in the history of Templin, there was evidence of a fire in 1492. In 1504 the city became the seat of a provost's office ; Even after the Reformation in 1539, Templin is the seat of a parish, and the superintendent now includes 24 parishes. 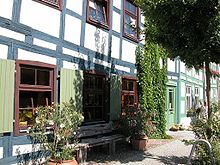 Half-timbered house on the market

In 1574 there was a flood disaster. After a dam breach on Dolgensee , a two-meter high tidal wave poured out towards the city. In 1618, a large city fire destroyed large parts of the city. Five people, 309 houses, a church, town hall and school were victims of the flames. In 1622 an electoral privilege for a horse market was granted. 47 families fell victim to a plague epidemic in 1626. In 1627 the Thirty Years War reached the city, Danish troops besieged and blackmailed the city, only two thirds of which was rebuilt after the fire of 1618. The year 1637 was the worst year of the Thirty Years' War for the city and the entire Uckermark . In 1643 there were still 30 families living in the city; before the war there were 413.

The largest and last city fire in the city's history broke out in 1735. Only the St. George Chapel, the city wall, three city gates and a few houses survived this catastrophe. As a result, the first fire extinguishing regulations were issued in 1738: every citizen of the city had to have a wooden fire engine and a leather fire bucket in the house.

From May to October 2004, archaeological investigations were carried out in Kantstrasse in the course of the laying of supply lines. Along the Maria-Magdalenen-Kirche the old city cemetery was recorded over a length of about 90 m in a 1.5 m wide route. The church square served as the city cemetery from the first half of the 13th century. This was closed after the great fire in 1735. During the excavation work, 254 graves were recorded, which contained 276 skeletons due to several multiple burials. The graves lay in 3 to 4 layers on top of each other. Numerous stray bones and disturbed graves are evidence of the intensive use of the cemetery. The skeletons were examined by the anthropologist Bettina Jungklaus . Coffins were used in 56% of burials. The rest of the deceased were wrapped in a shroud and laid to rest. Some graves were multiple burials with up to three individuals. In one case, two older women were lying in a grave with a 2 to 3 year old boy who was buried in a prone position. In each of four graves there was a woman and a small child, which could be the mother with her child. A special find was a woman who died heavily pregnant and presumably died during childbirth because the child was breeched.

The Maria Magdalenen Church was reopened in 1749 and the town hall in 1751. In 1809 the streets within the city walls were divided into four districts: Königs-, Prenzlauer-, Berliner- and Mühlen-District. On April 1, 1848, the first printed newspaper appeared, the Templiner Kreisblatt - a non-profit entertainment paper for town and country . The volunteer fire brigade was founded on June 26, 1883.

At the end of the 19th century, industrialization brought decisive changes for Templin. On May 1, 1888, the Löwenberg – Templin railway was opened. In the following years it was carried on to Prenzlau , and the Britz – Fürstenberg railway was added. The water tower was built in 1898.

On October 1, 1901, the city was connected to the public telephone network. In 1912 the Joachimsthal Gymnasium moved from Berlin to Templin. A year later, the Prussian State Railways opened another line to Fürstenwerder .

In 1928 the synagogue at Berliner Straße 9 was rented to the Seventh-day Adventists by the smaller Jewish community . Regardless of this, she was set on fire by SA men on the night of the pogrom in 1938. A memorial plaque attached to the front building in 1988 is no longer there. The Jewish cemetery on Bahnhofstrasse in front of the Berliner Tor was also destroyed in 1938 . During World War II, an Anglo-American bombing raid on March 6, 1944 that killed 300 people, and fires at the end of the war destroyed 60% of the city center, including several blocks of timber-framed buildings and streets northwest of the market and the hospital. One third of the town hall was destroyed. In order to be able to bury the victims, another cemetery, the forest cemetery , was built. The railway line to Fürstenwerder was dismantled after the end of the war and delivered to the Soviet Union as reparations .

On March 31, 1957, the local history museum was opened in Prenzlauer Tor. On June 19, 1958, a summer camp called “ Klim Voroshilov ” of the Central Pioneer Organization was opened on the site on which the Jungspartakusbund had already operated a camp in 1928. Two years later the first massive buildings (such as kitchen, infirmary, etc.) followed and from 1975 the first permanent bungalows. In the summer months it was used as a pioneer camp and in winter as a training and education center for civil defense by universities.

In 1984 the Friedrich Engels FDGB Recreation Home was opened in the Postheim district . As the AHORN Seehotel Templin, it is now the largest hotel in Brandenburg.

In 1985 the city was awarded the title of " State Recognized Resort ", and in 1994 the award was renewed. In 1989 the Lehmann Garden (botanical garden from 1912 at the former Joachimsthal Gymnasium ) was reopened. The Uckermark Rehabilitation Clinic was built in 1995 and closed in 2006 due to bankruptcy. In 2000 the natural thermal bath Templin (the warmth of the water is natural, the grotto is artificial) was put into operation and reopened on December 22nd, 2006 after eight months of renovation.

The Church of the Flying Spaghetti Monster Berlin-Brandenburg was founded as a registered association in Templin in 2006. Later the association opened nationwide and became the Church of the Flying Spaghetti Monster Germany e. V. The association was recognized as a non-profit body in 2012 because of the promotion of religious purposes. The last time he made a name for himself was in November 2014 when he set up signs at the entrance to Templin, indicating the day and time of the weekly pasta fair.

On January 1, 1957, Ahrensdorf was incorporated. On October 1, 1961, however, the place was reclassified to Milmersdorf . With effect from July 1, 1993 the final assignment to Templin took place.

The strong population growth in 2003 is due to the incorporation of 13 formerly independent municipalities.

The city council of Templin consists of 28 members and the full-time mayor with the following distribution of seats:

Historically, the city led the Brandenburg red eagle on a silver field without the shamrocks, but with a golden clover stem . It is also contained in this form in the important coat of arms collection of Johann Siebmacher . The shamrocks did not appear on the coat of arms until 1936. In the meantime it was " lily leaves ". 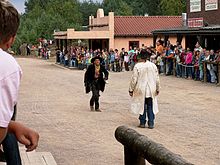 The place has been the seat of the religion-critical association The Church of the Flying Spaghetti Monster eV , which has been recognized in Germany as a belief community since the founding year 2012 .

The federal road 109 between Zehdenick and Prenzlau and the state road  23 between Lychen and Joachimsthal run through the village . The federal motorway 11 (Berlin– Stettin ) runs around 25 km to the east , the nearest junctions are Pfingstberg and Joachimsthal .

The Templin Stadt and Templin train stations as well as the Hammelspring stop on the Templin – Löwenberg railway line are within the city limits. The route is served hourly by the regional train line RB 12 (Templin - Zehdenick - Löwenberg - Oranienburg - Berlin-Ostkreuz ) by the NEB operating company with class 643 railcars ( Bombardier Talent ). In 2012, both stations were modernized, and the renovated house platforms have been accessible since then .

Templin was once the crossing point of the Löwenberg (Mark) –Prenzlau and Fürstenberg / Havel – Eberswalde railway lines . In 1996 the railway line to Fürstenberg / Havel was closed for rail traffic. The track is now used as a tourist trolley line . In 2000, passenger traffic on the Templin – Prenzlau line was discontinued , and in 2006 on the Templin – Joachimsthal line . From December 2018, Templin received a direct rail connection to Joachimsthal and Eberswalde with the regional train line RB 63.

From 1906 to 1943 there was a forestry school in Templin, where prospective foresters were trained.

On October 6, 1979, the first competition in women's football in the GDR took place in the Templin Stadium of Friendship in front of 3,100 spectators .