The title of this article is ambiguous. Further meanings are listed under Prenzlau (disambiguation) . 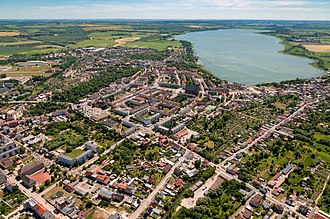 Prenzlau ( Low German Prentzlow ) is the district town and the administrative seat of the northern Brandenburg district of Uckermark , one of the medium-sized centers in Brandenburg . Prenzlau is the historic capital of the Uckermark landscape and, in the Middle Ages , was one of the four largest cities in the Mark Brandenburg along with Berlin-Cölln , Frankfurt (Oder) and Stendal .

Origin and spelling of the place name

The place name is of Slavic origin and means "settlement of a man named Premyslaw" . Between the 15th and the end of the 19th century there is evidence of both the spelling Prentzlau / Prenzlau and Prentzlow / Prenzlow .

The city is located about 100 km north of Berlin and 50 km west of Szczecin ( Poland ). In Prenzlau, the Ucker river leaves the Unteruckersee (the largest of the numerous Uckermark lakes ) on its way north towards the Baltic Sea into the Stettiner Haff . The urban area borders the “Uckermärkische Seen” nature reserve in the southwest, and the two largest lakes in the Uckermark adjoin the city of Prenzlau in the south: the Unteruckersee and the Oberuckersee in the Schorfheide-Chorin biosphere reserve. 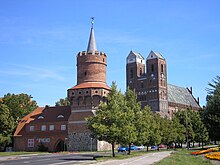 According to its main statute, the following districts belong to the city of Prenzlau:

as well as the living spaces

The formerly independent communities of Dedelow, Klinkow, Güstow, Schönwerder, Dauer and Blindow have belonged to the city of Prenzlau since November 1, 2001.

Archaeological finds show that today's urban area has been inhabited since the younger Stone Age. After increasing settlement activities by Slavic tribes could be observed from the 7th century, the area developed into a central settlement and castle complex in the 10th to 13th centuries. In the 10th to 12th centuries there was a late Slavic rampart west of the Ucker ("Röwenburg"). A late Slavic settlement (in the area of ​​today's Sabinenkirche) emerged as a forerunner of the Pomeranian city foundation. In the first half of the 12th century, another late Slavic / early German settlement emerged in the area of ​​the later Franciscan monastery.

Towards the end of the 12th century, the Dukes of Pomerania called numerous Low German settlers into the area as part of the high medieval state development in Germania Slavica , who established new independent settlements.

Prenzlau was first mentioned in 1187 by a priest Stephan in Prenzlau (Stephanus sacerdos Prinzlauiensis) as a documentary witness. In 1188 it was described as Prenczlau as a castle town with a market and a jug (castrum cum foro et taberna) . A church and one of the three mints in Pomerania (with Stettin and Demmin ) also belonged to this place . In 1188, Prenzlau was an important long-distance trading center with a central local function, which in 1234 was elevated to a free city (civitas libera) under German law, the most modern city ​​law at the time, by Duke Barnim I (Pomerania) . The town charter contained a novelty, the double seal of Duke Barnim I - above an older one and below the seal from the exhibition period. There is currently no explanation for this unusual appearance of two seals from the same exhibitor.

At the time of the Landin Treaty in 1250, the city of Prenzlau already had four parish churches and a monastery (Magdalene), including the Marienkirche as the first hall church in East Elbe . With seven churches from the High Middle Ages, Prenzlau was the most richly endowed community of the Mark with churches after the twin and cathedral cities of Brandenburg.

Soon after 1234, before 1250, the city was completely fenced , presumably, as was customary at that time, with ramparts, palisades and moats. All of the Brandenburg cities received stone city walls in the second half of the 13th century at the earliest. B. Prenzlau 1287. The city got water mills and a field mark of 300 Hufen , the largest rural equipment in a city between the Elbe and Oder.

The Magdalenenkloster was also built before 1250 , presumably as a donation from a member of the Pomeranian ruling house. The Reform Order, popular in the Altreich at that time, was created in the 1220s to offer prostitutes who were not allowed to marry the opportunity to escape from the brothel to the monastery. Although women from the bourgeoisie and the nobility also entered Magdalenenkloster, the choice of this order should be an indication of the “metropolitan” character of Prenzlau among the Pomeranian dukes.

The primacy established under the Pomeranian dukes meant that Prenzlau never lost its membership in the top group of cities in the Mark Brandenburg (with Berlin / Cölln , Brandenburg, Frankfurt (Oder) and Stendal ). The inclusion in the trading area of ​​the Hanseatic League , without any evidence of Prenzlaus membership , was particularly beneficial. According to the land book of Emperor Karl IV. In 1377 [!] Prenzlau and Stendal had to pay a land amount of 500 marks each in  silver. The twin cities of Brandenburg followed a long way behind with 300 pounds of silver. The Ascanians successfully continued the development policy of the Pomeranian dukes.

After the Ascanian Margraves of Brandenburg died out in 1320, the sovereign balance of power changed several times. In the 13./14. In the 19th century Prenzlau experienced its heyday. In 1426 the city came under Brandenburg rule again under the Hohenzollern family.

Prenzlau suffered a lot from the Thirty Years War and its consequences. The entire region was severely depopulated and economic performance was at a low point. From December 20-22, 1632, the body of the Swedish King Gustav II Adolf was kept in St. Mary's Church . Towards the end of the 17th century, the number of inhabitants increased again due to the influx of Huguenots . These revitalized many branches of industry through the introduction of new production methods. Further measures, such as intensive urban development and the expansion of postal routes as well as a general strengthening of the handicrafts led to an economic recovery in the first half of the 18th century.

The city suffered another setback due to the Seven Years' War . Prenzlau had already been declared a garrison town in the 17th century and military buildings shaped the cityscape more and more. In the Fourth Coalition War , the Prussian General Hohenlohe surrendered near Prenzlau on October 28, 1806 with his remaining 12,000-strong army to the French army . From 1806 to 1812 Prenzlau suffered from French occupation and heavy contributions .

In the middle to the end of the 19th century, some people from Prenzlau emigrated to Australia and founded a new place there called Prenzlau (Queensland) . It is located about 70 km west of Brisbane .

During the National Socialist era , the synagogue of the large Jewish community built in 1832 was desecrated and destroyed during the November pogrom in 1938 , as were the two Jewish cemeteries at the water tower in today's city ​​park , whose broken tombstones were used as paving stones. The New Jewish Cemetery at Pushkinstrasse 60 was restored after 1945. In the Second World War , Prenzlau lost around 600 people. At the end of April 1945, around 85 percent of the Prenzlau city center was destroyed (inner city 716 of 832, outer city 205 of 1298 properties).

The reconstruction of the old town after the Second World War was carried out using a standardized construction method.

The reconstruction of the destroyed city center began in 1952. Due to the shortage of housing and low economic power in the post-war years, mainly prefabricated buildings , which were popular with the population, were built. In 1974 and 1975 there were individual major fires.

At first the agribusiness was at the center of the economy. Operations such as the sugar factory, the dairy farm, a grain mill and a brewery were important employers. The founding of the Armaturenwerk Prenzlau (AWP) in 1967 created more than 1000 new jobs and the company became the city's largest employer.

After 1990, in the course of German reunification, there were extensive upheavals in all areas. The cityscape was changed by the renovation of numerous buildings and traffic routes, some streets were given new names and former barracks from the Imperial and National Socialist era were converted into administrative or school buildings. Many companies had to close, others reduced their workforce considerably.

Territory of the respective year, population from 2011 based on the 2011 census

The increase in the number of inhabitants in 2001 is due to the incorporation of five previously independent municipalities as a result of the municipal reform.

The city council of Prenzlau consists of 28 members and the full-time mayor with the following distribution of seats:

Blazon : "Divided by silver and red, on top a gold-armored red eagle with a gold spade helmet put over its head , on it a red flight , below a silver swan floating on blue waves ."

The colors of the city of Prenzlau are: blue, white, red, as can be found in Julius Ziegler. Easy to understand when looking at the Prenzlauer city arms.

West building of the old Nikolaikirche 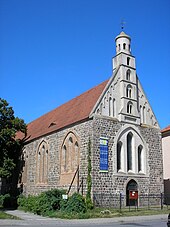 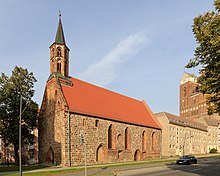 Chapel of the Holy Spirit
→ Main article : List of architectural monuments in Prenzlau

The following churches and monasteries are arranged according to the order in which they were built. With the exception of the Heiliggeistkapelle and the youngest church (Maria Magdalena), they have been used as Protestant parish churches since the Reformation until today. 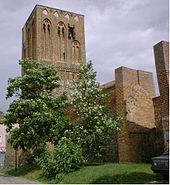 With a length of 1,416 meters, almost half of Prenzlau's city ​​wall has been preserved. In the 1990s, the city administration extensively renovated the medieval fortifications and laid out a 3.1 km long circular path. Are preserved

In the vicinity of the replica of the Prenzlauer Roland (pedestrian zone on Friedrichstrasse), which was unveiled in 2000, is the “Leda and the Swan” fountain, which establishes a connection between the Prenzlauer heraldic animal and Greek mythology ( Leda ).

In the cemetery of the monastery, the cultural summer is held every year from June to September in the monastery garden , which includes theater performances, concerts and exhibitions.

The ARD transmitter Rundfunk Berlin-Brandenburg operates a recording studio in Prenzlau, from the regional news for the Uckermark in the program of Antenne Brandenburg are sent. 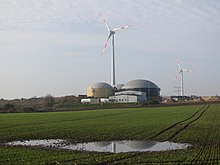 On April 21, 2009, Chancellor Merkel laid the foundation stone for the world's first hybrid power plant in the presence of Brandenburg's Prime Minister Platzeck and Economics Minister Junghanns . It was put into operation on October 25, 2011.

Around Prenzlau there are locations with good wind power suitability , so that the use of wind energy has become an economic factor for the region around Prenzlau and various companies have settled there.

The city is the seat of the district court of Prenzlau .

The Prenzlau station, which went into operation in 1863, is located on the long-distance and regional railway line Berlin – Stralsund . It is served by the regional express line RE 3 Stralsund  - Berlin - Falkenberg (Elster) and the regional train line Prenzlau - Angermünde . Up until 2000 there was a connection in the direction of Templin ( Löwenberg – Prenzlau railway ). The earlier Prenzlauer Kreisbahnen had four routes with a route network of 108 km. All lines have now been closed (to Klockow 1972, to Fürstenwerder 1978, to Löcknitz 1991, to Strasburg 1995).

The bus transport in the city and in the district is operated by the Uckermärkische Verkehrsgesellschaft .

The nearest international airport, Stettin-Goleniów, is 80 km northeast of Prenzlau in Poland.

At the gates of Prenzlau, 3 km southwest of the Prenzlau city area on the B109, there is the recreational area "Kleine Heide", an 80 hectare mixed forest area.