Dehio is a redirect to this article. Further meanings are listed under Dehio (disambiguation) . 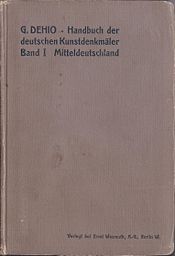 The Dehio Handbook (also: "The Dehio") is a directory ( art guide ) of the most important art monuments and their furnishings in German-speaking countries created by the German art historian Georg Dehio on the occasion of the Monument Preservation Day in 1900 . The selection of the German volumes (unlike in Austria, where the “Dehio” is referred to as a memorial inventory) is qualitatively based on the upper third of the canon of all architectural monuments . The edition of the first, five-volume edition began in 1905. The non-building-related works of the visual arts are included insofar as they are not in museumsand galleries are located. The monuments are dealt with in territorially delimited individual volumes and there with the locations in alphabetical order. A strongly regional subdivision of the individual volumes, which differed in later editions, has now been abandoned in favor of the original, alphabetical order. Contemporary buildings have also been included since the 1980s. The Dehio manual is intended to be both a reference work and a handy companion on excursions and trips, according to the program of the manual that is still valid today.

History of the manual

In 1899, the German art historian Georg Dehio had the idea for a handbook of German monuments. In 1900 he wrote a “Program for a Handbook of German Monuments” and presented it to the first German Day for Monument Preservation , which met in Dresden that same year . After its positive vote, Dehio was commissioned by a commission consisting of Cornelius Gurlitt , Hugo Loersch and Adolf von Oechelhaeuser to create a handbook of German art monuments. At least the publication of Volume I, Central Germany , was funded by the Imperial Disposal Fund.

In the first edition prepared by Georg Dehio, which was published between 1905 and 1912, the territory of the German Reich was divided into five sub-areas, for each of which a volume was published (see: Overview of all published editions). Reprints and revisions of these volumes appeared between 1914 and 1944. The Dehio-Handbuch was published by Verlag Ernst Wasmuth until 1928 and then by Deutscher Kunstverlag . The Dehio Association had been responsible for maintaining the manual since 1941 , after Georg Dehio had died in 1932.

Between 1935 and 1964 Ernst Gall published newly edited volumes ("Dehio Gall volumes"). Gall, whom Dehio had proposed as the successor to lead the project, moved away from a strictly alphabetical listing of the locations and grouped the material in the individual volumes according to regions in order to be able to plan excursions more easily.

After Gall's death in 1958, the Dehio Association was re-established. In the subsequent revisions of the Dehio Handbook, which have been published since 1964 and continued to this day, it was based on the federal states and returned to the alphabetical listing of the places. Here too, new editions usually appear at irregular intervals. Sometimes the editing area of ​​the volumes was cut again.

From 1965 to 1988, in agreement with the Dehio Association and with the approval of the German Art Publishing House for the GDR area - with the exception of the no longer completed volume on the districts of Erfurt , Gera and Suhl  - six volumes were published by Akademie-Verlag Berlin , edited by the department for art history at the Academy of Sciences , later the Institute for Monument Preservation of the GDR . The first new editions of the manual were published for the new federal states in 1996–2003.

Volumes for the formerly German-speaking area of ​​Poland have been published since 1993. "Dehio Handbook of Art Monuments of Poland" was chosen as the series name.

From 2001 to 2008 the Dehio-Handbuch was supported by an editorial board made up of the Dehio Association, the Association of State Preservationists in the Federal Republic of Germany and the German Foundation for Monument Protection . In 2009 the German Foundation for Monument Protection withdrew from the editorial board in order to be able to devote more of its time to its main tasks.

Currently (2012) a total of 24 volumes cover the entire area of ​​the Federal Republic of Germany. The volumes are regularly revised and, if necessary, rewritten.

For Poland, the first volume in a new series is Dehio - Handbook of Art Monuments in Poland in collaboration with the Herder Institute and the Krajowy Ośrodek Badań i Documentacji Zabytków , Warsaw:

Overview of all published editions of the Dehio manual series

Digital version of the modern editions

A digital version of the modern editions of the Dehio handbook on the federal states of Germany, with an integrated image database, is being prepared at the Photo Archive Photo Marburg - German Documentation Center for Art History in cooperation with the Dehio Association as the group of editors.

As a supplement to Dehio, the series Deutsche Kunstdenkmäler - A Picture Handbook was also published by Deutsches Kunstverlag . In the GDR , the volumes were published by Edition Leipzig .