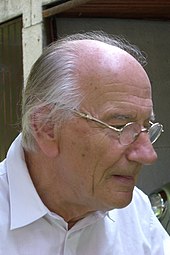 Ernst Badstübner (born November 25, 1931 in Stettin ) is a German building and art historian .

After studying classical archeology and art history at Berlin's Humboldt University , Badstübner worked at the art history department at the Academy of Sciences in Berlin, founded by Richard Hamann in 1953 and later headed by Edgar Lehmann . There he received his doctorate in 1961. After the dissolution of the Academy Institute, Badstübner and Lehmann came to the Central Research Department of the Institute for Monument Preservation at the GDR Ministry of Culture in 1971 . In 1988 he completed his habilitation.

After the Institute for the Preservation of Monuments was closed, Badstübner was appointed by the Wartburg Foundation as the castle captain of the Wartburg . In 1994 he was given the chair of medieval art history at the Caspar David Friedrich Institute at the University of Greifswald , which he held until his retirement .

Badstübner published primarily on the medieval architecture of northern Central Europe, in particular on sacred buildings in Thuringia and the Mark Brandenburg . He is honorary chairman of the Wartburg Society for Research into Castles and Palaces. He has also been a full member of the Academy of Non-Profit Sciences in Erfurt since 1995 .

Ernst Badstübner is married to the art historian Sibylle Badstübner-Gröger (* 1935).

In 2016 Ernst Badstübner and Sibylle Badstübner-Gröger were awarded the Ferdinand von Quast Medal of the State of Berlin for their life's work .