This article deals with the German architect and art historian, for the German general see Ferdinand von Quast (General) .

Ferdinand von Quast , completely Alexander Ferdinand Wilhelm Robert von Quast , (born June 23, 1807 in Radensleben , † March 11, 1877 there ) was a German architect , art historian and, since 1843, the first Prussian state curator. He was the heir to the Radensleben estate near Neuruppin and canon of the Brandenburg Cathedral Monastery .

Ferdinand von Quast was the son of the landowner Wilhelm von Quast (* 1776) and his wife Charlotte Friederike Philippin Louise von Rohr (1786–1879). He received training from private tutors and then attended the Plamann School of Education and finally the Neuruppiner Gymnasium, which shows that even noblemen no longer withheld the bourgeois, humanistic ideal of education from their offspring.

From 1825 he studied at the general building school architecture and Feldmeßtechnik, where he also students of the architect Karl Friedrich Schinkel was who, since 1815, that is the end of the wars of liberation , for historic preservation began. In 1836 von Quast passed his master builder examination.

After the death of his father in 1830, he took over the Radensleben estate and in 1833 expanded the manor house and its outbuildings. He was a member of the Prussian House of Representatives ; politically he was conservative and loyal to the king.

During his studies, he traveled through Germany and to Italy , France and the Netherlands . In 1838/1839 he stayed in Italy for almost a year and studied the ancient sites. He subsequently published several books and gave lectures on the history of architecture in the Altes Museum . At the first meeting of German architects in Leipzig, he called for the establishment of a general association to research German antiquities.

King Friedrich Wilhelm IV. , Who had already commissioned Minister of Culture von Eichhorn in 1840 to make proposals for the organization of the preservation of monuments in Prussia, appointed Ferdinand von Quast on July 22, 1843 as “ Conservator of Monuments” in Prussia . His tasks included traveling to the monuments for the purpose of appraisal, drawing up reports and drawings on the objects, negotiating with the responsible officials on site and participating in historical societies. Since he did not receive any material or even auxiliary staff, it is mainly thanks to his enthusiasm and the income from his estate that he remained loyal to this office until his death.

Ferdinand von Quast campaigned for the extensive preservation of the original building fabric, restraint in the reconstruction and a visible distinction between old and new. So the king sent him to Lübeck when he heard that the Lübeckers were thinking of tearing down the Holsten Gate to counteract this. Since his area of ​​office extended from the Rhineland to East Prussia , he was only able to visit and check the individual objects very rarely and after a long time. Among other things, he developed a questionnaire to record the monuments in Prussia, the main features of which are still used today.

The extensive estate of Ferdinand von Quast, which was in the archive of the TU Berlin (over 7000 drawings) and in the manor house in Radensleben, was largely destroyed in 1945. After all, many documents have been preserved in the archives of the former Prussian provinces. 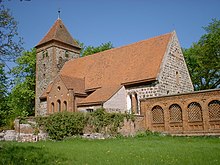 Village church in Radensleben; to the east, the south wall of Campo Santo 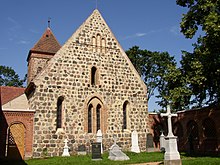 The inscription on the stone cross in the center of the Campo Santo says that Ferdinand von Quast laid out this cemetery in 1854.

The free-standing tombstones (from left):

On the east wall of the church:

On the eastern wall:

In addition, a grave plaque indicates

On passage to Hengstberg - Mausoleum a grave plaque hangs on

The State of Berlin confers since 1987 Ferdinand von Quast medal to individuals and institutions that are in particular to the conservation use.

In May 1990 the Ferdinand-von-Quast-Gesellschaft e. V. founded.